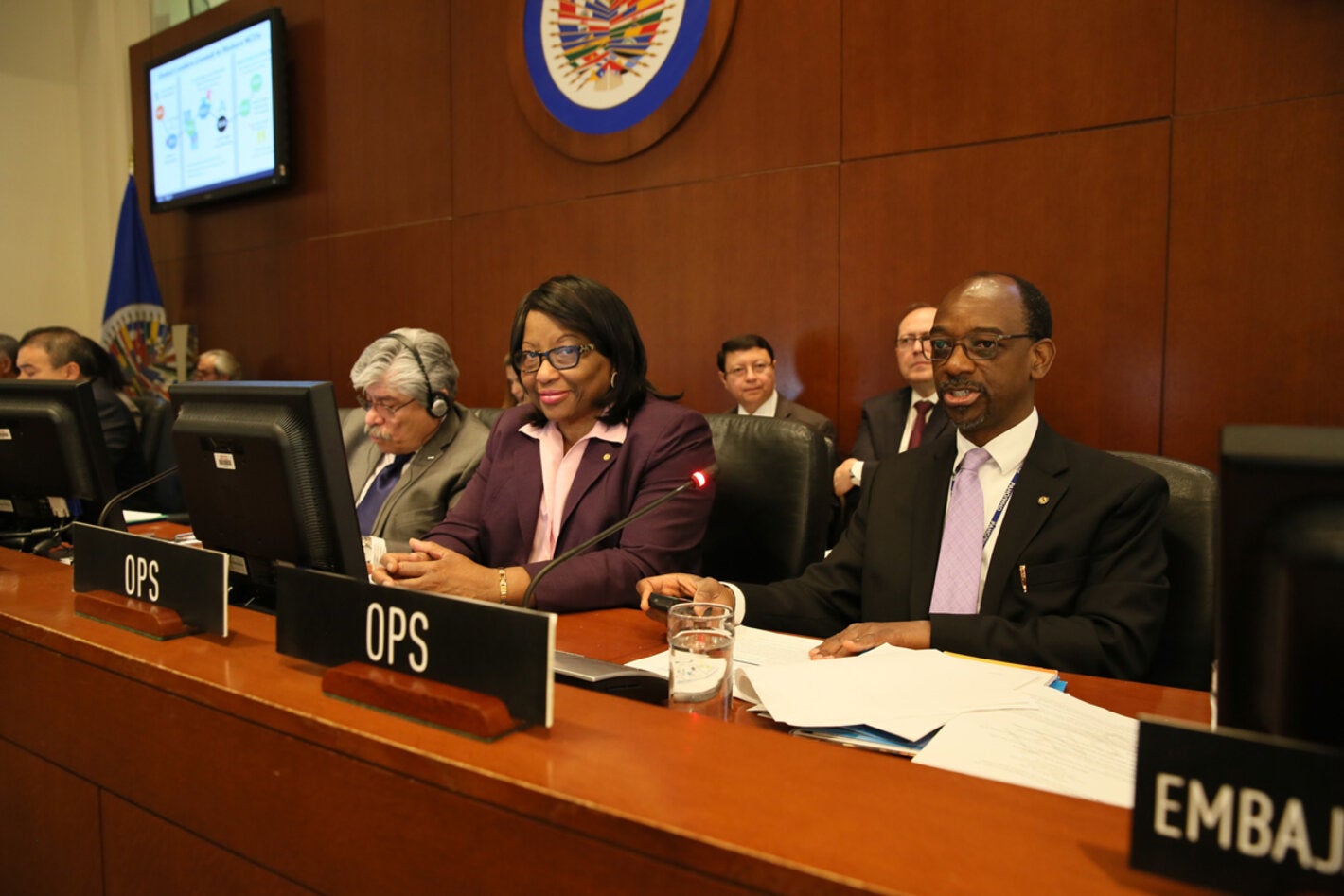 Washington, D.C., March 19, 2018 (PAHO/WHO) - A strong political commitment and public policies involving all sectors of government are needed to address noncommunicable diseases, which take 5.2 million lives a year and involve enormous costs for the countries of the Americas, said Carissa F. Etienne, Director of the Pan American Health Organization (PAHO), speaking to the Permanent Council of the Organization of American States (OAS).

"The message is clear: what has been achieved so far in the prevention of noncommunicable diseases (NCDs) is far inadequate," Etienne stressed. "Progress on NCDs depends on political commitment to put people's health first, ahead of politics, ahead of profits, and ahead of self-promotion."

The Permanent Council of the OAS and the Inter-American Council for Integral Development held a special meeting to address this topic. The Assistant Secretary General of the OAS, Néstor Méndez, emphasized that these diseases "disproportionately affect the most vulnerable populations," and that "a multisectoral approach is required to create the conditions under which access to health is available to those populations."

The president of Uruguay, Tabaré Vázquez, urged the countries of the Americas to join in pushing for solutions to these diseases at the global level, when the subject is addressed in September at the United Nations. "Only united can we win in this struggle. Only united can we defend the health of our people," he stated.

Cancer, cardiovascular diseases, diabetes, and chronic respiratory diseases are the principal noncommunicable diseases among the population of the Americas. A third of those who die from these illnesses die prematurely, before reaching the age of 70. Over 200 million people in the Region are estimated to be living with one of these diseases, which require long-term medical care and access to medicines.

Economic losses due to noncommunicable diseases are enormous. They include the costs associated with lost income, lost productivity due to premature deaths, and spending on health services, the PAHO Director warned. It is estimated that Peru, for example, may lose 7% of its gross domestic product (GDP) every year for the next 15 years to noncommunicable diseases, Jamaica 4% of its GDP, and Costa Rica 4.4%.

"Evidence has shown that regulatory policies on finance, trade, labor, agriculture, social development, and education, among others, can have a greater impact on preventing and controlling NCDs, than can health sector policies alone," Etienne stated.

Increasing tobacco taxes is considered the most cost-effective intervention to reduce tobacco use, while at the same time generating additional government revenue. Etienne pointed to Uruguay's leadership in tobacco control measures and called on countries to follow its example of imposing stronger regulations. She also called attention to policies instituted by Mexico, Barbados, and Dominica to tax sugar-sweetened beverages, and policies such as those implemented by Chile and Ecuador to promote healthy diets by informing consumers through food labeling.

"But industry interference as well as commercial and economic interests have impeded the implementation of pro-health fiscal and regulatory policies, using an all-of-government approach," Etienne underscored. She called on the countries to promote a "health-in-all policies" approach to ensure that laws, regulations, and policies are implemented to reduce NCDs.

Although progress is being made in the Region on reducing the burden of NCDs, much remains to be done, particularly in the area of addressing risk factors such as the use of tobacco and alcohol, and unhealthy diet, explained Anselm Hennis, Director of PAHO's Noncommunicable Diseases and Mental Health Department. Despite the commitments and policies that have been put in place, country-level indicators show that "a gap remains in addressing the risk factors for noncommunicable diseases."

"All sectors must be involved. The private sector needs to be brought on board, with mechanisms to prevent conflicts of interest. A policyspace should also be created to encourage more participation by civil society in creating solutions," added Sir Trevor Hassell, President of the Healthy Caribbean Coalition. The OAS Executive Secretary for Integral Development, Kim Osborne, listed the steps that have been taken by entities within the Inter-American system to address the inequities that noncommunicable diseases create for the populations of the Americas.

Looking toward the United Nations High-level Meeting on NCDs

Heads of State from throughout the world will meet in September at a United Nations High-level Meeting to discuss progress made on noncommunicable diseases. This is the third meeting since 2011, when countries around the world committed to working to reduce the burden of these diseases. In the Sustainable Development Goals, the countries also agreed to reduce premature mortality from noncommunicable diseases by one third by 2030.

"Bolder commitments from all sectors are needed at the third UN High-level Meeting to ensure that all countries can collectively reach the Sustainable Development Goal target," Etienne emphasized.

Uruguayan President Tabaré Vázquez also called for participation at the September United Nations meeting, and for leadership on worldwide solutions to this problem. In October 2017, Uruguay hosted the Global Conference on Noncommunicable Diseases, which agreed on a roadmap for countries to implement actions. Uruguay and Italy will be facilitating the September United Nations meeting.

In order to continue advocacy on the subject at the regional level, Barbados will present a resolution at the General Assembly of the OAS for the countries of the Americas to commit to promoting this issue beyond the health sector.