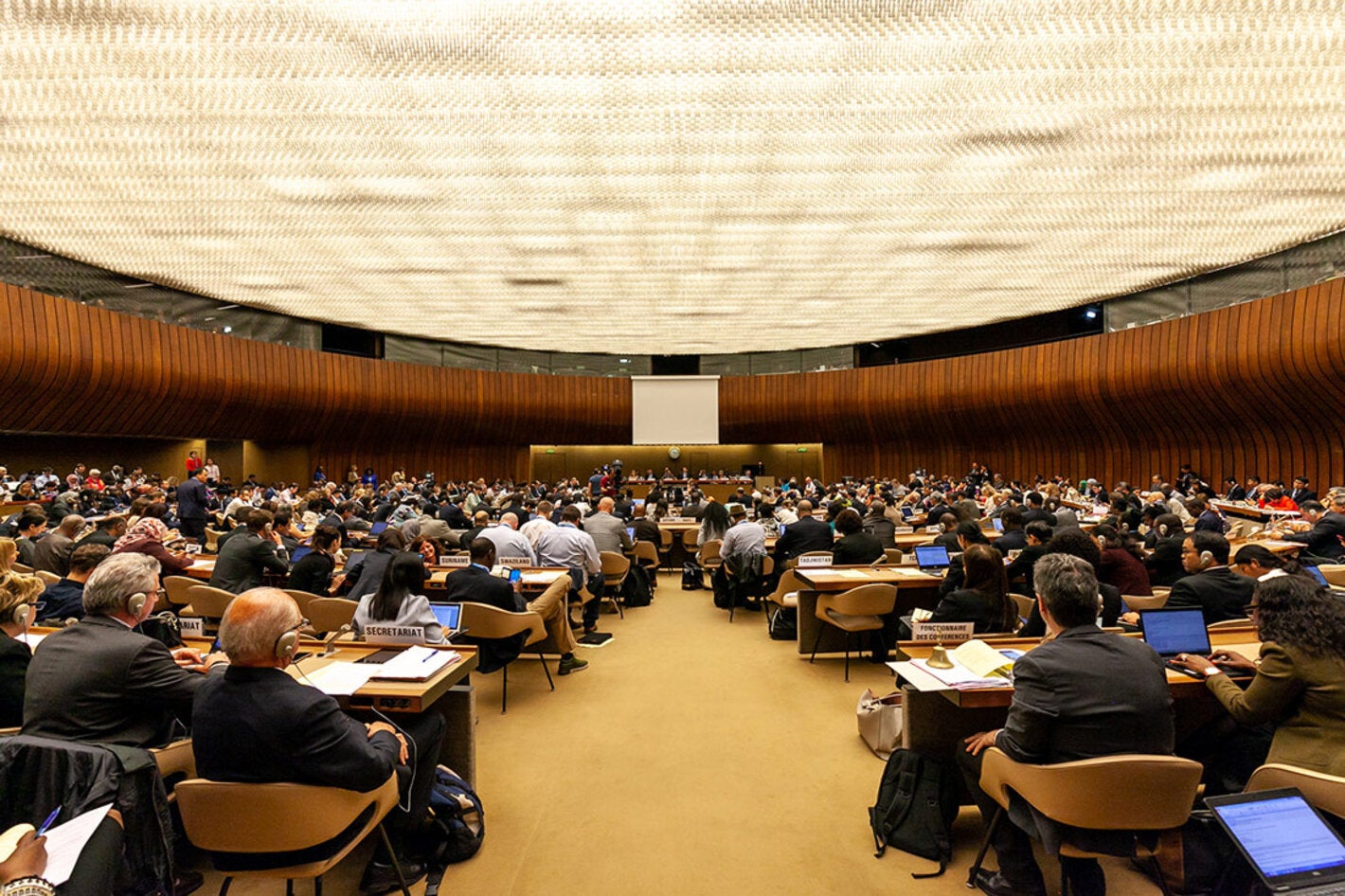 Geneva, 23 May 2018 (PAHO/WHO) - Delivering on an intense agenda, the representatives of the countries participating in the 71st World Health Assembly received a report on the Ebola outbreak in the Democratic Republic of the Congo and an independent report on the WHO health emergencies programme, and discussed health conditions in the occupied Palestinian territory.

The World Health Assembly also made decisions related to access to medicines and vaccines and public health innovation.

Delegates to the World Health Assembly heard today that the next few weeks would tell whether the Ebola outbreak in the Democratic Republic of the Congo would continue to expand to urban areas or could be kept under control. Vaccination of high-risk populations began earlier this week in the affected area of the country, a densely forested area covering hundreds of kilometres and which is largely without roads or electricity.

Dr Tedros Adhanom Ghebreyesus, WHO Director-General, praised the frontline health workers for their tireless efforts to tackle the outbreak.

Dr Peter Salama, WHO Deputy Director-General for Emergency Preparedness and Response, said the outbreak was on the "epidemiological knife-edge". Outlining the rapid response that has been put in place with support from WHO and partners, Dr Salama said it was hard to recall a situation where a government had responded so quickly and so decisively to an outbreak.

Both highlighted the vital contributions being made by partners and the generosity of the donors who are supporting the response.

Delegates also discussed a report from the Independent Oversight and Advisory Committee for WHO's Health Emergencies (WHE) Programme. The committee said the new programme had put in place the basic structures and systems to guard against the sort of catastrophic failure that occurred with the West Africa Ebola outbreak in 2014-2015 and had brought improved speed and predictability to WHO's work in emergencies.

The committee, which was established following the West Africa outbreak, said that over the last two years, the programme had demonstrated its importance in stopping the spread of infectious pathogens beyond national boundaries and leading the health response in numerous humanitarian crises. It noted, however, that further progress was still needed.

The Health Assembly discussed the health conditions in the occupied Palestinian territory including East Jerusalem, and the occupied Syrian Golan. Delegates reaffirmed the need for full coverage of health services, recognizing that the acute shortage of financial and medical resources is jeopardizing access of the population to curative and preventive services.

They agreed to ask the Director-General to provide support to the Palestinian health services, including through capacity-building programmes and the development of strategic plans for investments in specific treatment and diagnostic capacities locally. They also requested support for the development of the health system in the occupied Palestinian territory, including east Jerusalem, and for health-related technical assistance to the Syrian population in the occupied Syrian Golan.

The World Health Assembly also made decisions today relating to access to medicines and vaccines and to public health innovation.

Delegates have asked WHO to elaborate a 5-year roadmap to address the global shortage of, and access to, medicines and vaccines, to be presented to the Health Assembly in 2019. Improving access to safe, effective, affordable medicines, vaccines and other health products is key to achieving universal health coverage and is one of the targets of the Sustainable Development Goals.

Access to essential medicines and other health products was until recently viewed as a challenge predominantly faced by lower-income countries. But the rising costs of new medicines has put pressure on the ability of all health systems to provide affordable access. Increasing numbers of substandard and falsified medical products further affect access to safe and effective medicines and vaccines. In addition, problems such as antimicrobial resistance and opioid misuse highlight the need to improve the appropriate use of medicines.

Delegates considered the report regarding the programme review of the Global Strategy and Plan of Action on Public Health, Innovation and Intellectual property, and urged implementation of the recommendations by each relevant stakeholder. Delegates asked the Director-General to report on progress in implementation of this decision to the World Health Assembly in 2020.

Poverty, among other issues, affects access to health products and new products to fight diseases affecting developing countries are needed; governments, the pharmaceutical industry, foundations, NGOs and others have undertaken initiatives in recent years to address these challenges. The Global Strategy is designed to guide these initiatives by promoting innovation, building capacity, improving access and mobilizing resources.

The plenary meeting concludes the general discussion on "Health for all: Commit to universal health coverage."

Over the last three days, ministers and delegates from the Region of the Americas shared their views on how to achieve "Health for all: Commit to universal health coverage," the theme of general discussion at the plenary meeting of the 71st World Health Assembly.

The Region's health ministers described the measures they have taken to attain that objective and reaffirmed their commitment to achieving universal health.

More than 25 delegations from the Region of the Americas spoke at the plenary meeting.