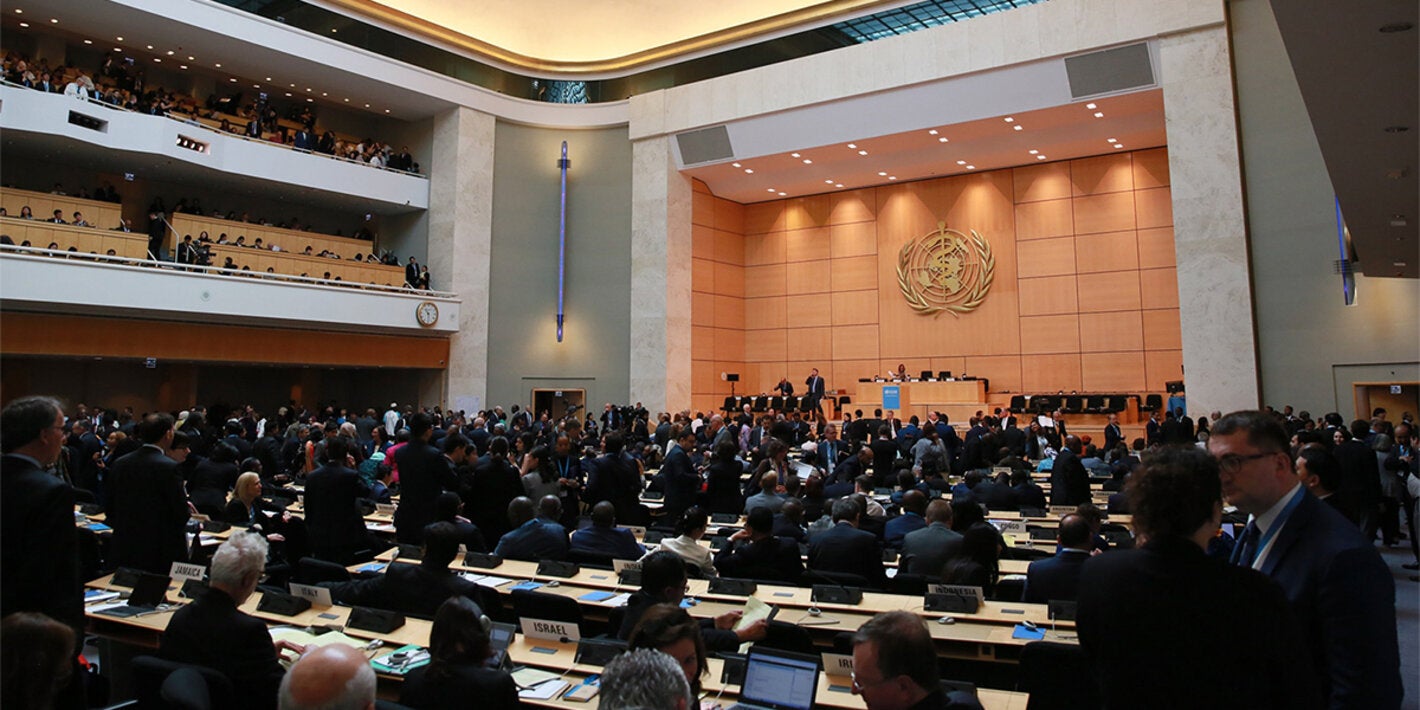 During the previous day, the representatives of the countries approved the program budget proposed by the World Health Organization (WHO), consisting of US$4421.5 million for the biennium, which includes a 3% (or US$28 million) increase in Member State assessed contributions for 2018-2019. The proposed budget sets out the organization's priorities in line with the Sustainable Development Goals. It includes increased investments in the new WHO Health Emergencies Program (US$69.1 million) and in combatting antimicrobial resistance (US$23.2 million).

Delegates paid tribute to ongoing efforts to end polio transmission in the last three endemic countries - Afghanistan, Nigeria, and Pakistan. They expressed concern about the continued shortage of inactivated poliovirus vaccine, and noted the urgent need to contain polioviruses in safe facilities, destroy unneeded materials, and appropriately contain resources that can be used for research or other purposes. This has become particularly important since the eradication of type 2 of the wild poliovirus in 2015.

The Global Polio Eradication Initiative (GPEI) was launched in 1988, following the adoption for a resolution for the worldwide eradication of polio at the Forty-first World Health Assembly. Since then, the number of polio cases has fallen by over 99.9%. In the Region of the Americas, the most recent reported case was in Peru, in 1991. The initiative has also strengthened countries' capacities to tackle other health issues, for example through better disease surveillance; immunization and health systems strengthening; early warning; and emergency and outbreak response.

Delegates also addressed the challenge of scaling down the global polio response as eradication becomes closer, acknowledging the importance of developing a strategy to define the critical functions needed to sustain a polio-free world, as well as the global structures and financial requirements to support them. The development of this Post-eradication Certification Strategy is ongoing, and will be presented to the Executive Board and World Health Assembly next year.

Delegates welcomed efforts to plan for a post-polio world, including WHO's organization-wide work to identify the key programmatic, financial, human resources and organizational risks associated with the eventual closure of the global polio eradication effort. They requested the Director-General to consider polio transition planning an urgent organizational priority and highlighted the need to ensure that polio transition needs are fully incorporated into the development of the next WHO budget and planning cycle.

Delegates reaffirmed the critical role played by the Pandemic Influenza Preparedness Framework's (PIP) as a specialized international instrument that facilitates expeditious access to influenza viruses of human pandemic potential, risk analysis and the expeditious, fair and equitable sharing of vaccines, and other benefits.

They emphasized the importance of prioritizing and supporting global pandemic influenza preparedness and response, including through the strengthening of domestic seasonal influenza virus surveillance, manufacturing and regulatory capacities, and international coordination and collaboration through the Global Influenza Surveillance and Response System (GISRS) to rapidly identify and share influenza viruses with pandemic potential.

The Health Assembly agreed that the WHO secretariat should comprehensively analyze, in consultation with Member States and relevant stakeholders, including the GISRS, the implications of amending the definition of PIP biological materials to include genetic sequence data, and expanding the PIP Framework to include seasonal influenza. The delegates further agreed that the PIP Framework model has potential to be used for other pathogens.

The PIP Framework was set up in 2011 to introduce greater equity and solidarity among nations when the next pandemic strikes. The PIP Framework provides WHO with real-time access to approximately 10% of global vaccine production, enabling the Organization to send life-saving doses to developing countries in need.

The Health Assembly agreed to a five-year action plan under which WHO will collaborate with the International Labor Organization and the Organization for Economic Cooperation and Development in working with governments and key stakeholders to address the global health and social workforce shortfall and contribute to international efforts to achieve the Sustainable Development Goals.

It also focuses on maximizing women's economic empowerment and participation. It addresses occupational health and safety, protection, and security of the health and social workforce in all settings. It also covers the reform of service models towards the efficient provision of care, particularly in underserved areas.

The action plan supports the WHO Global Strategy on Human Resources for Health: Workforce 2030. It will facilitate implementation of the recommendations of the United Nations Secretary General's High-Level Commission on Health Employment and Economic Growth, which found that, as populations grow and change, the global demand for health workers will double by 2030.

Tedros, Chan, and Brundtland emphasize the need to progress with political commitment toward universal coverage

Universal coverage in health, as an objective and a means of improving people's health, was the focus of a historical talk today by three Directors-General of the World Health Organization (WHO): the Director-General elect, the departing Director-General, and a Director-General Emeritus, all of them strong champions of universal health.

"All roads lead to universal coverage in health," the Director-General elect said, adding: "Resources are important, but much more important is the absence of political commitment" to achieve the objective.

Countries can begin, little by little, based on what they are able to do, Tedros suggested. WHO can collaborate by demonstrating to countries the best practices, and can help them adapt and scale such practices to their needs, thus "showing the way rather than pressing for political movement." Tedros explained that countries can also target their action toward primary care, and then begin to scale up. Another option is to initiate a political movement to increase awareness in the communities, presenting the subject on a daily basis as a rights issue.

The greatest challenge facing the Region of the Americas, having eliminated measles and rubella, is to maintain the achievement and support other regions in speeding global eradication, said PAHO Director-General Carissa F. Etienne at a technical session yesterday, in the framework of the 70th World Health Assembly.

As part of a briefing entitled "Vaccines that save lives for all, everywhere," Etienne reported how the Region of the Americas eliminated these two diseases in recent years, describing the current challenges involved in maintaining that achievement.

In her presentation, the PAHO Director explained that the Region had experienced measles outbreaks after eliminating the disease, principally due to cases imported from other parts of the world where the virus is still in circulation. "The Brazilian outbreak was the first outbreak in the post-elimination era with more than 12 months of sustained transmission - with the re-establishment of endemic transmission in two states of Brazil - putting in jeopardy the measles elimination goal," she reported. It was thanks to the country's firm political commitment that the outbreak was halted. "In North America, vaccine hesitancy contributed to significant numbers of unvaccinated children, thus increasing the risk of endemic transmission," she indicated.

In plenary session at the 70th World Health Assembly, between 22 and 24 May, health ministers and delegates of the Americas spoke on how to improve health systems in the age of sustainable development. The diverse subjects that the representatives covered in their presentations included universal health, how to reach the health-related Sustainable Development Goals (SDGs), and each country's achievements and challenges.

In all, some 25 ministers of health and delegates took the floor. The following is a summary of their presentations in the order in which they spoke.

- More information on the commitment to the Sustainable Development Goals

Uruguay will host WHO's Global Conference on Noncommunicable Diseases

World Health Organization (WHO) officials and the Minister of Public Health of Uruguay, Jorge Basso, today invited Representative Offices throughout the world to participate in a world conference to bolster the consistency of public policy, in order to improve noncommunicable disease prevention and control.

Announcement of this global conference, to be held in Montevideo, Uruguay, on 18-20 October 2017, was made at a parallel event accompanying the 70th World Health Assembly. Presidents of several countries, as well as ministers of health, are expected to participate, and will seek agreement on a road map to guide the countries in their attempts to influence public policy in sectors beyond the health sector, and to improve the consistency of regulations as they relate to noncommunicable diseases. 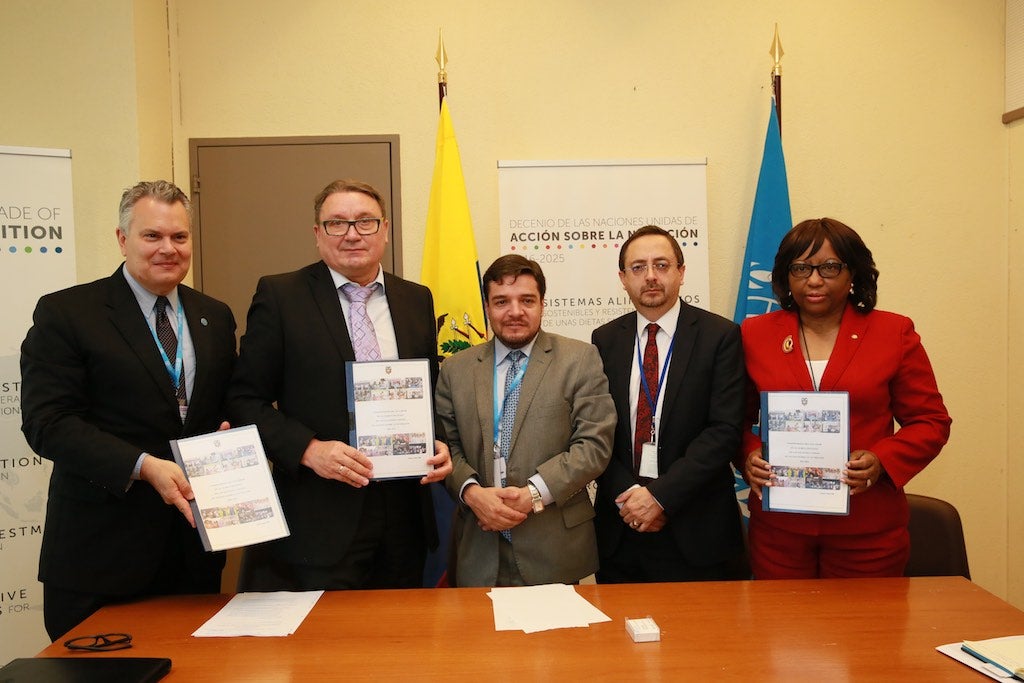 At the 70th World Health Assembly today, the Ministry of Public Health of Ecuador announced the country's adoption of new and broad commitments to health in response to the appeal of the United Nations Decade of Action on Nutrition (2016-2025).

Vice Minister of Health Fernando Cornejo announced the commitment in a meeting with the Director of the Pan American Health Organization (PAHO), Carissa F. Etienne, and Oleg Chestnov, WHO's Assistant General-Director for Noncommunicable Diseases and mental health.

Ecuador is adopting the five SMART commitments (specific, measurable, achievable, relevant, and time-bound), supported by 15 policy measures designed to improve the long-term health and well-being of its population. Ecuador thus becomes the second country in the world and the first in the Americas to make specific commitments in the framework of this UN initiative. Brazil announced its commitment some days earlier.