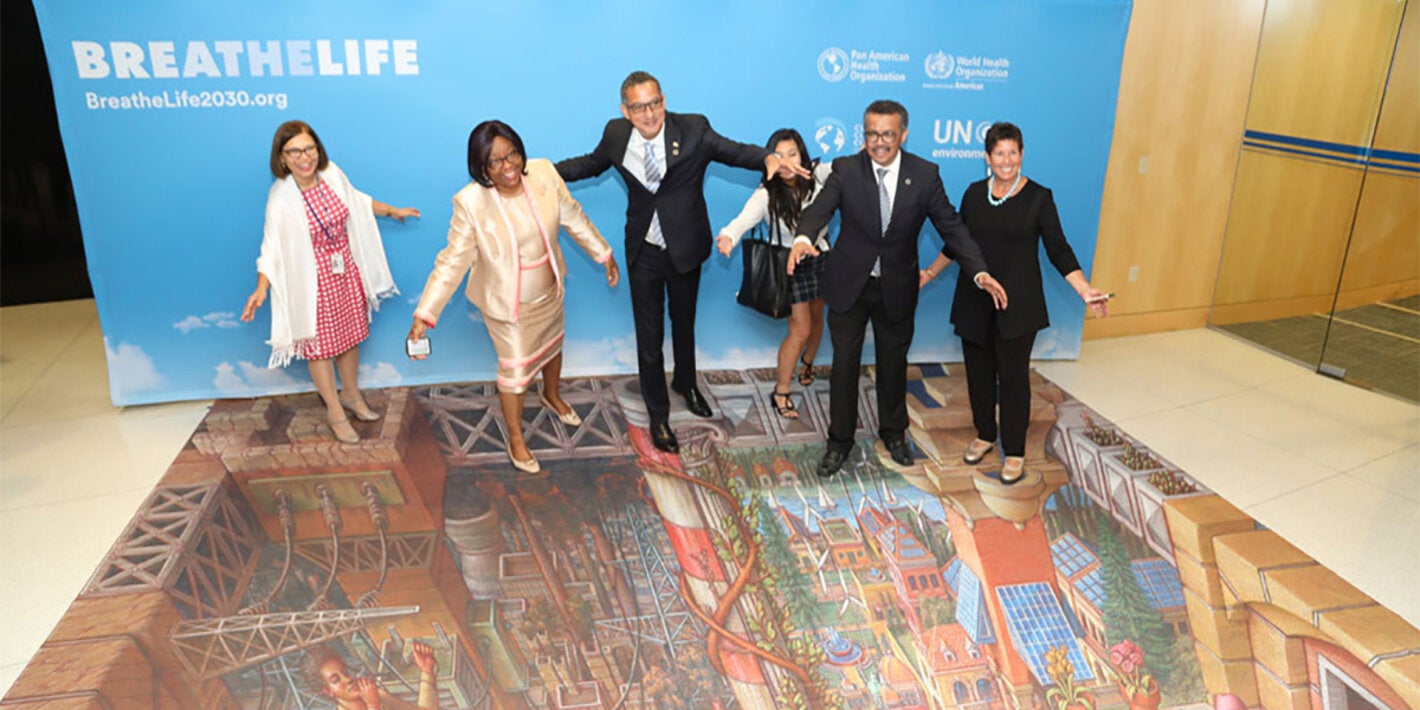 The initiative seeks to mobilize cities and populations to protect health and the planet from the effects of air pollution, responsible for 1 in 9 deaths worldwide.

Washington, DC, September 25, 2017 (PAHO / WHO) - The exhibit BreatheLife: Clean air, healthy future, which seeks to mobilize cities and individuals to protect health and the planet from the effects of air pollution, opened today at the 29th Pan American Sanitary Conference of the Pan American Health Organization (PAHO) in Washington, DC.

The exhibition is part of a joint campaign by the World Health Organization (WHO), the Climate and Clean Air Coalition and the United Nations Environment Program (UNEP) to achieve the WHO guidelines on air quality and reduce climate pollutants, responsible for 1 in 9 global deaths.

"Air pollution is responsible for about one-third of deaths from stroke, chronic respiratory diseases, and lung cancer, as well as a quarter of deaths from heart attack," said PAHO Director Carissa F. Etienne at the opening of the exhibition. Smog in many cities is also a cause of asthma and chronic respiratory diseases. Etienne called on cities of the region to join the initiative.

In the Americas, Mexico, Chile, and Colombia have already joined the campaign. The city of Washington, DC, which is hosting the regional meeting of health ministers, joined the initiative last week.

The interactive exhibition consists of a blue sky that hangs behind a 3D carpet with a graphic by street artist Kurt Wenner, which illustrates scenes of clean and contaminated cities.

WHO and the Climate & Clean Air Coalition (CCAC) have identified some  20 ways to clear the air, many of which can benefit health, and climate. The global campaign emphasizes both practical policy measures that cities can implement (such as better housing, transport, waste and energy systems) and those that people and communities can take to improve air quality, such as halting the burning of waste promoting green spaces and encouraging walking or cycling. Improving vehicle standards, prioritizing public and active transit, and adopting more efficient cooking, lighting and heating alternatives are other actions that can save lives and help save the planet.