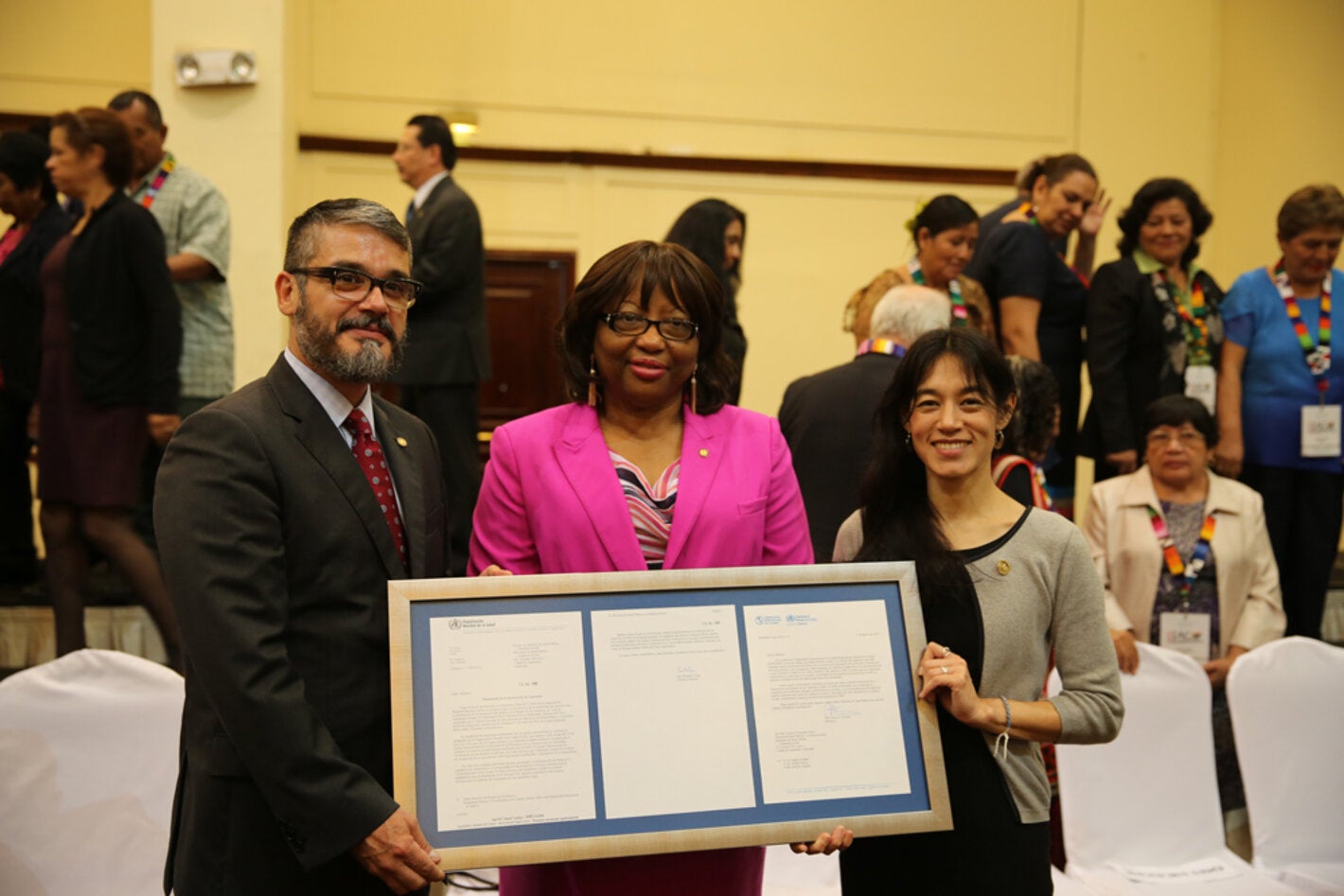 Only one focus of onchocerciasis (river blindness) persists in the Americas, on the border between Brazil and Venezuela. The disease is still present in 31 African countries and Yemen.

Guatemala City, 8 December 2016 (PAHO/WHO)- A hundred years after Guatemalan ophthalmologist Rodolfo Robles established the causal relationship between onchocerciasis and blindness, Guatemala has received official verification from the World Health Organization (WHO) that the country has eliminated this parasitic infection, a disease that put more than 230,000 people at risk of losing their vision in the 518 communities where transmission continued.

Carissa F. Etienne, Director of the Pan American Health Organization (PAHO) (WHO Regional Office for the Americas), presented the official document to the President of Guatemala, Jimmy Morales, during the 27th Inter-American Conference on Onchocerciasis (IACO), held every year by the countries and stakeholders working to free the hemisphere from this disease.

Etienne congratulated the Government of Guatemala for having met the criteria for onchocerciasis elimination, which includes the elimination of morbidity and the interruption of transmission, and for having honored the commitments made in two PAHO resolutions on this subject in 2008 and 2009.

Guatemala has now become the fourth country both in the Americas and in the world to reach this goal, following Colombia, Ecuador, and Mexico. Complete elimination from the Americas will require eliminating a focus of the disease on the border between Brazil and Venezuela. At the global level, river blindness continues to be a public health problem in 31 African countries and Yemen.

"Eliminating a disease is not an easy achievement for a country," Etienne affirmed. "It requires long-term dedication and political commitment, but you have demonstrated that it is possible."

Among the six countries with documented onchocerciasis transmission in the Americas, Guatemala had the greatest number of geographical foci of transmission of the disease (four) and the largest population at risk (more than 230,000 people), representing 41% of everyone at risk in the Region.

"We are pleased to receive this verification and are grateful for the contributions of the health professionals and stakeholders who have taken part in well-focused joint activities that today have resulted in the elimination of the disease," said President Morales. "The health of Guatemalans will be always a priority because progress is made through a healthy and educated people," he affirmed.

Onchocerciasis is a parasitic disease caused by very long, thin worms called filariae. It is transmitted through the bite of infected black flies (known in Guatemala as "la mosca canche") that breed in fast-flowing rivers and streams, which is why the disease is called "river blindness". People working in agriculture are especially at risk.

Elimination was achieved through coordination among health authorities at all levels, the efforts of workers in the vector-borne disease control program, the participation and involvement of health volunteers, and a high level of commitment and participation in the affected communities.

Another key aspect was the commitment, support, and coordination of all international partners in the Onchocerciasis Elimination Program in the Americas (OEPA), including the Carter Center and the Mectizán ® Donation Program.

Guatemala's main strategy to achieve elimination was large-scale distribution of a semiannual dosage of Mectizán ® (ivermectin), a drug administered according to a person's weight or height for 7 to 12 years. The country achieved coverage of at least 85% of the eligible population whenever the treatment was offered.

The Minister of Health and Social Welfare of Guatemala, Lucrecia Hernández Mack, called onchocerciasis elimination "a milestone for public health in the country and in the world." She said she hoped that this achievement will "inspire continuation with the elimination of other diseases and an understanding that coordination with other actors is necessary in order to improve the health of the population."

Dr. Rodolfo Robles, a Guatemalan physician and researcher, played an important role in the struggle against this parasitic infection. In 1915, after the disease had been described in Africa, he established the causal relationship between the disease and blindness and other visual alterations. In his honor, onchocerciasis is also known in Guatemala as "Robles disease."