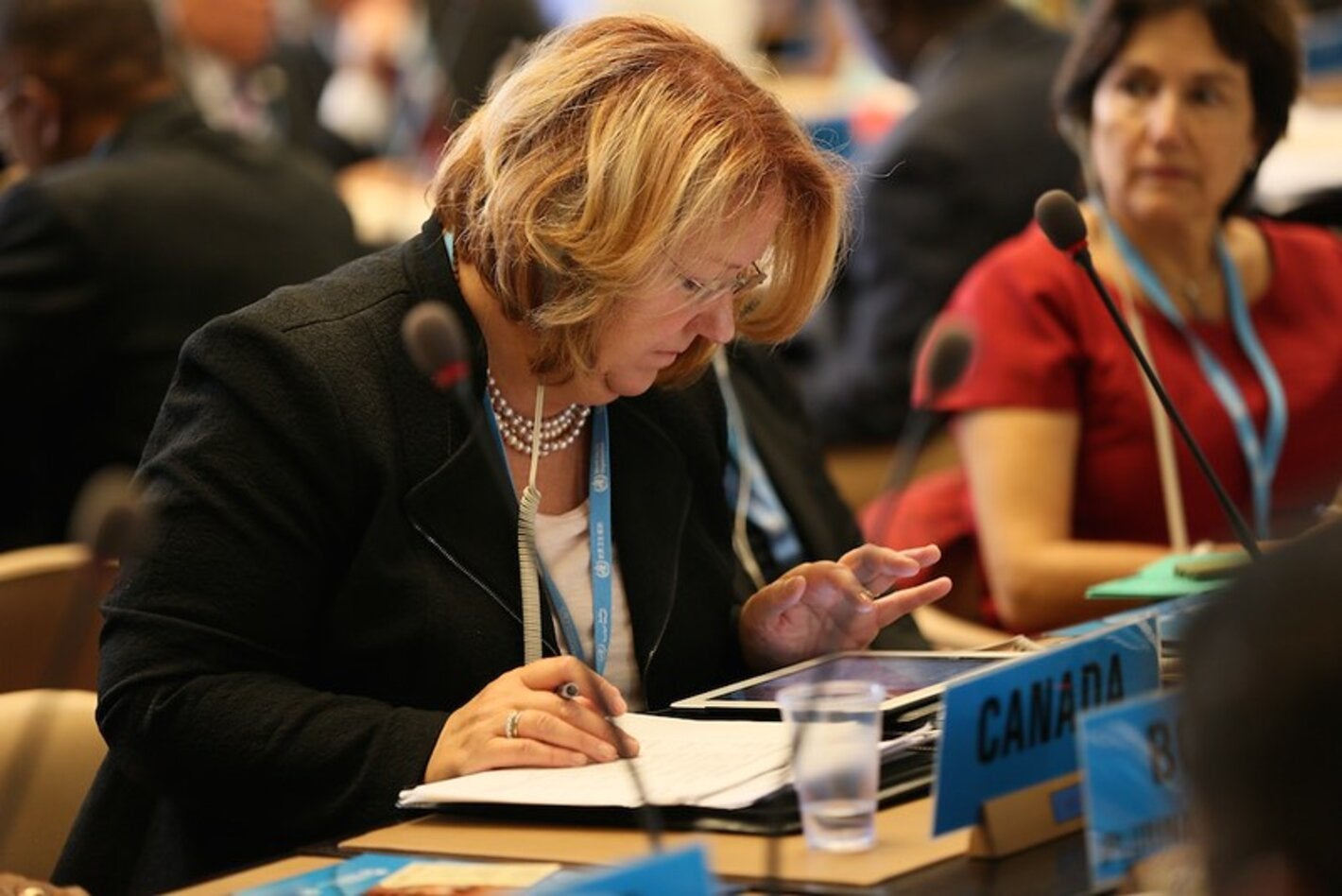 Geneva, May 19, 2015 (PAHO/WHO)- Ministers and delegates of the Americas addressed the plenary of the 68th World Health Assembly regarding the need to ensure that every country has a solid health system ready to face any adversity. They made reference to the lessons learned during the Ebola outbreak and highlighted the achievements.

Representatives of 21 countries of the Region spoke before the plenary to share their perspectives. The following is a summary of each country's presentation, in order of appearance.

"Colombia is an example of resiliency and innovative policies in the midst of difficulty," affirmed the Minister of Health and Social Protection of Colombia, Alejandro Gaviria, who reported on the actions his country has taken to advance universal health coverage over the last two decades in order to ensure that everyone has the same health benefits package. He pointed out that out-of-pocket healthcare costs in Colombia are among the lowest in the world.

Gaviria noted the challenges to the expansion of these reforms, such as the price of certain drugs, and the fact that creating resiliency also entails the implementation of innovative policies that can help overcome unnecessary access barriers. He also referred to Colombia's decision to suspend the use of the herbicide glyphosate because of its links to cancer. The minister stressed that "public health must be above other considerations."

The U.S. Secretary of Health and Human Services, Sylvia Mathews Burwell, referred to the discussion of World Health Organization (WHO) reform, asserting that WHO must be strengthened in order to do its work and better serve health goals.

In the discussion on resilient health systems, Mathews stated that the Assembly should seek a strong commitment to full implementation of the International Health Regulations (IHR) in all countries by 2019. She said the U.S. has joined others, including the European Union, the African Union, and WHO, to establish a global health security agenda to strengthen the ability of all countries to comply with the IHR. "The United States is committed to improving health systems," she affirmed.

The delegate from Canada pointed out that all countries face health challenges that cannot always be resolved by the health sector alone, especially when the goal is to build resilient health systems. He noted that it is crucial to be able to deploy health resources when and where they are needed, an assertion backed by experience, particularly during the Ebola outbreak. He underscored Canada's support for the countries affected by the outbreak in West Africa through the provision of laboratory facilities, services, funding, and Ebola vaccine testing.

The Canadian delegate also mentioned other insidious threats that must be confronted, such as antimicrobial resistance, and said his country is working to develop a national strategy in this regard.

Brazilian Health Minister Arthur Chioro said that resilient health systems must have response capacity, but that Brazil's system has been strengthened by combining health and education with social policies to reach more people.

Chioro emphasized that the Mais Medicos [More Physicians] program, carried out with support from the Pan American Health Organization (PAHO), aims to provide everyone with the human resources needed for access to health services. He said his country is working to guarantee a universal and equitable national public health system that defends universal access to healthcare as fundamental principle.

The minister raised other issues such as road safety and its effects on health, as well as the importance of promoting comprehensive care for drug and alcohol users. He emphasized the need to decrease the number of unnecessary caesarean sections and guarantee women's access to the health services they require.

The Minister of Public Health of Cuba, Roberto Morales Ojeda, asserted that health systems should be based on primary care in order to recover quickly after emergencies. He cited as an example the Cuban system, which "provides care to 100% of the population; it is free, accessible, and reaches everyone."

Morales said his country is maintaining the quality of services and making its system sustainable, and that the fact that its outcomes are comparable to those of developed countries is a testament to the strength of the health system. He noted that Cuba was the first country to request certification of the elimination of mother-to-child transmission of HIV and syphilis. It also provides medical assistance to 78 countries, in spite of the economic embargo. He emphasized that they also have given special assistance to countries affected by emergencies, from Ebola outbreaks to earthquakes and floods.

Mexico: Health systems that can deal with new diseases

Mexican Health Minister Mercedes Juan reported on the steps her country has taken to strengthen its health systems to be "capable of resisting and absorbing changes in the environment." She stated that "strong foundations" must be laid in order to provide timely, relevant, high-quality services.

Juan pointed out that Mexico has enhanced its information systems in order to track epidemiological conditions in real time, making it possible to identify risks. Work has also been done to ensure clean drinking water, safe food, and safe and accessible drugs. In order to provide health care to persons lacking social security benefits, a fund has been set up as a buffer against catastrophic healthcare expenditures and to lower out-of-pocket costs.

The minister observed that her country currently faces a new challenge with the introduction of the Chikungunya virus, which is transmitted by the bite of infected mosquitoes. Dealing with this virus requires actions at all levels of government, as well as community participation.

Gollan mentioned tools such as the PAHO Revolving Fund for Vaccines and the PAHO Strategic Fund, which resolve problems of access to vaccines and drugs. He also highlighted the need for regulatory and research funding mechanisms, as well as the development and production of new drugs that allow for reasonable prices consistent with the objective of universal access to healthcare.

"If these processes continue to be developed according to a market-based logic and at a very high rate of return, it will be impossible to achieve that objective," the minister said.

Finally, he expressed Argentina's support for WHO reform, and emphasized the global vaccine plan on the agenda at the World Assembly. He also voiced concern over noncommunicable diseases and underscored the actions that Argentina is taking to reduce salt intake and tobacco.

Referring to the capacity of health systems to recover from an emergency, the delegate from Venezuela said that "knowing that we are all at risk means making the commitment to cooperation among all people." He indicated that Venezuela has strengthened its ability to offer a timely response to manage public health events.

The delegate mentioned the actions spearheaded by Venezuela in preparation for the potential introduction of the Ebola virus, as well as its contributions in support of the West African countries affected by the 2014 outbreak.

The Minister of Health of Peru, Aníbal Velásquez, maintained that global climate change continues to worsen and that its effects "place significant burdens on the health system." He indicated that, with the support of PAHO and WHO, progress was made at the COP20 conference, held last year in Lima, toward the inclusion of human health in discussions on climate change.

Velásquez stated that his country is already suffering consequences, because although it has made efforts to prevent the introduction of the chikungunya virus into Peru, climate-related water and sanitation issues could create an environment conducive to it.

The minister noted that this and other threats, such as the potential introduction of Ebola or influenza, require modified strategies and the implementation of changes in health systems. He stated that solid institutions are needed to bolster the government's capacity to face threats and protect public health, and he expressed Peru's commitment to supporting the strengthening of WHO and PAHO, which play a key role in helping countries face potential threats.

Speaking before the plenary, the Nicaraguan delegation emphasized that investing in family health is a priority and that the country has been a leading advocate for a paradigm shift in health services toward a more active focus on disease prevention and the promotion of healthy lifestyles. In that context, there is a need for "greater solidarity to attain health equity."

The Nicaraguan delegation highlighted the country's achievements in reducing malnutrition and maternal and infant mortality, although it still faces challenges with respect to noncommunicable diseases.