A groundbreaking effort by Brazil to expand access to health care has reached an estimated 63 million people in historically underserved communities since it was launched two years ago with support from the Pan American Health Organization/World Health Organization (PAHO/WHO).

PAHO/WHO has supported the two-year program with technical cooperation.

Washington, D.C., 22 September 2015 (PAHO/WHO) — A groundbreaking effort by Brazil to expand access to health care has reached an estimated 63 million people in historically underserved communities since it was launched two years ago with support from the Pan American Health Organization/World Health Organization (PAHO/WHO).

The program, known as "Mais Médicos" ("More Doctors"), has deployed over 18,000 Brazilian and foreign healthcare professionals to more than 4,000 municipalities, most of them socioeconomically vulnerable areas in remote zones, on the outskirts of cities, or in Brazil's 34 special indigenous health districts. Nearly two-thirds of the participating health professionals are Cuban nationals who joined the program through a technical cooperation project between PAHO/WHO and the Ministries of Health of Brazil and Cuba. 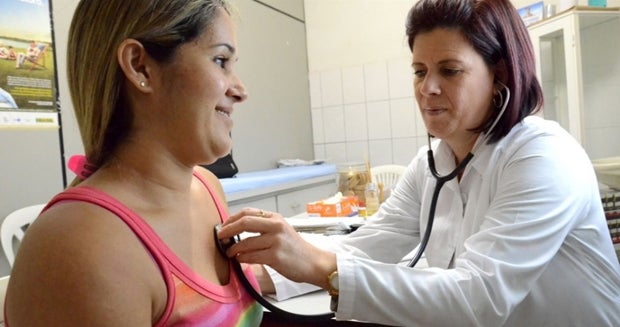 "This is a country that has put words into action," said Joaquín Molina, PAHO/WHO representative in Brazil. "Brazil has committed itself to providing universal access to health, and over the past two years has come very close to making it a reality."

Brazil's constitution explicitly endorses the right to health, and its Unified Health System provides healthcare services free of charge to everyone. However, the country's large population, vast territory and complex geography have made it difficult to meet the needs of all its inhabitants, especially in vulnerable and remote communities.

The ""Mais Médicos" program has addressed these challenges by increasing the availability of medical training in Brazil's national universities, improving incentives for health professionals to work in underserved areas, and recruiting medical professionals from outside the country when such incentives have failed to attract sufficient numbers of Brazilians.

When the program began in 2013, Brazil attempted to recruit primary care physicians to serve in communities throughout the country, including 701 municipalities that at the time had no medical doctor at all. Thousands of new posts were created and opened to both Brazilian and foreign doctors. At first, however, Brazilians were slow to accept posts in the underserved communities, and the 701 without doctors remained so.

Over the next two years, thousands of foreign doctors and healthcare workers, most of them from Cuba, joined the program. PAHO/WHO's country office provides logistical and administrative support for the training of the new doctors, monitoring and evaluation, and compilation and dissemination of lessons learned to countries throughout the Region of the Americas.

In a second phase of the program, launched earlier this year, Brazilian nationals filled nearly 4,200 newly created positions. As of mid-2015, some 5,300 Brazilians were working in "Mais Médicos" along with over 11,400 Cubans and more than 1,500 nationals of other countries. As a result of the program, today not a single Brazilian municipality is without a primary care doctor, according to Minister of Health of Brazil Arthur Chioro.

"Twenty-seven years after the creation of the Unified Health System, we have finally guaranteed the right to basic health care for all Brazilians," said Dr. Chioro.

Two independent bodies—the Federal University of Minas Gerais and the Court of Audit of the Federation—have carried out evaluations of "Mais Médicos", both reporting favorable results. One found that 94% of users reported satisfaction with the performance of participating doctors, and 86% reported that quality of care has improved under the program. The other found that wait times in clinics had declined 89% under the program, despite an increase of 33% in the average number of visits each month, and the number of doctor home visits had increased by 32%.

To further scale up its domestic health workforce, Brazil is now in the process of increasing medical school enrollment by 11,500 students and creating 12,400 new residency positions for specialists. The country has also invested some 5.6 billion reales (nearly US$ 1.8 billion) in health infrastructure.

"These are admirable efforts that set an example for other countries and other regions that aspire to provide universal access to health and universal health coverage," said PAHO/WHO Representative Joaquin Molina. "Advancing toward universal health requires commitment, investment and innovation, but Brazil is showing that it can be done."