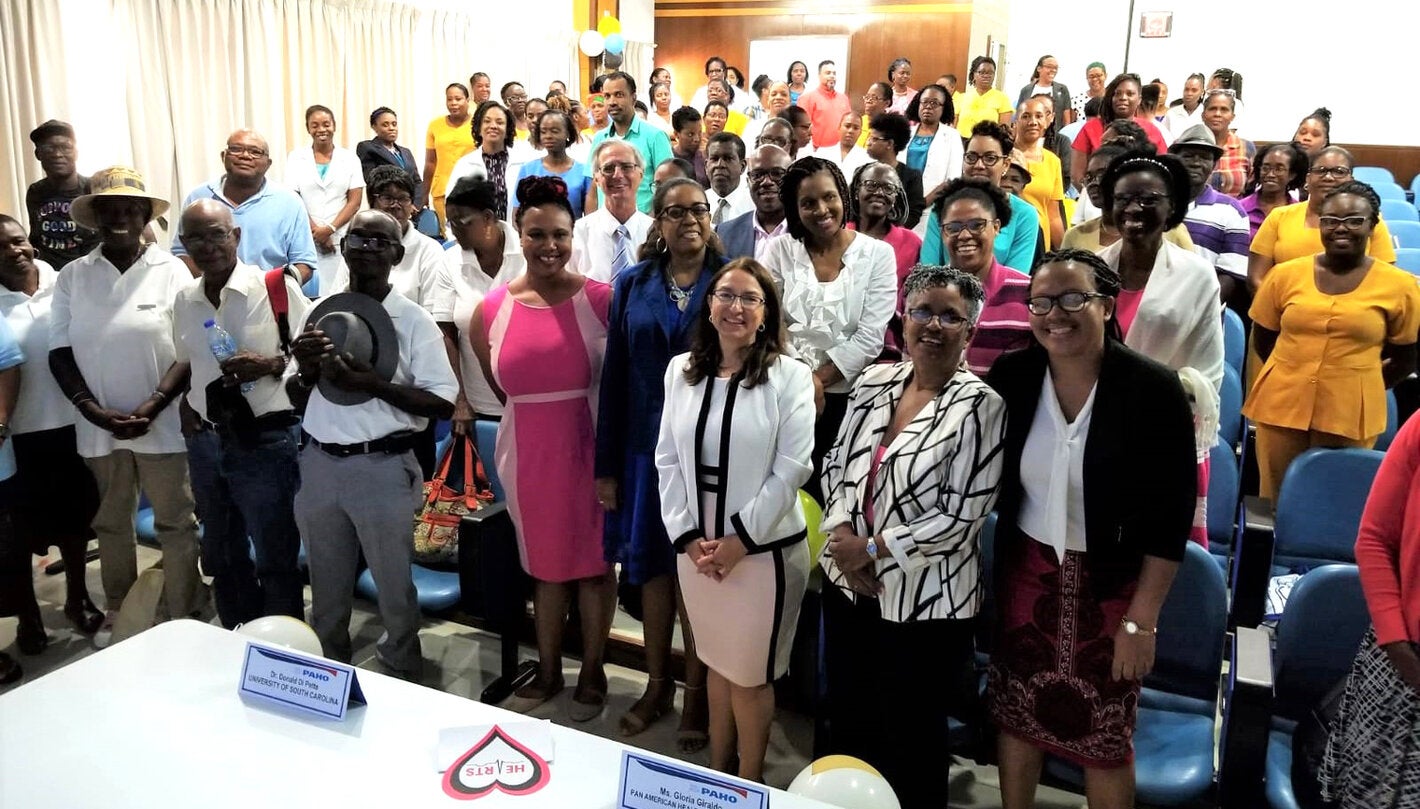 Saint Lucia, 24 October 2019 (PAHO) - Saint Lucia became the third country of the Caribbean to implement the HEARTS initiative to improve prevention and control of hypertension, one of the risk factors for cardiovascular diseases such as heart attacks and strokes, the principal causes of death in the Caribbean.

HEARTS, promoted by the Pan American Health Organization/World Health Organization (PAHO/WHO), together with the US Centers for Disease Control and Prevention (CDC), the initiative Resolve to Save Lives and other partners, is an opportunity to improve the cardiovascular health of the population of St. Lucia.

Cardiovascular diseases have been the main causes of disease and death in St. Lucia for a decade, according to the Ministry of Health and Welfare of St. Lucia. In 2017, these diseases contributed to 31% of the mortality in the country.

Before launching it at the national level, St. Lucia will implement HEARTS demonstrations in several primary care clinics across the island, including Babonneau, Bellevue, Ciceron, Grande Riviere, La Croix Maingot and Richfond, which were already evaluated. Health workers participated in a training workshop this week to implement the project in the six wellness centres. The initiative includes training the health team, a registry of patients and an active search for people with hypertension who do not know their condition.

"Implementing the package of measures that HEARTS includes, which are simple and of proven effectiveness, can prevent complications from cardiovascular diseases and premature deaths," said PAHO/WHO experts.

Hypertension is a problem that contributes to heart disease. However, it is estimated that 40 percent of people with hypertension in the region do not know their condition. Of those who know they have hypertension and receive treatment, around 20 percent have their blood pressure controlled.

Among the initiative’s measures for primary health care workers are the establishment of a protocol for the management of hypertension, adoption of a set of drugs and technologies of proven effectiveness to treat hypertension, reorganization of the tasks of the health team, registry and monitoring of progress; and advice to patients on healthy habits and lifestyles.

HEARTS, which dates from 2016, seeks to support governments in strengthening prevention and control of cardiovascular diseases to save lives and help countries meet the global goal to reduce by a third premature deaths from noncommunicable diseases by 2030.

Barbados and Trinidad and Tobago are the two other countries in the English-speaking Caribbean where HEARTS is being implemented. In the rest of the Americas, the project is also active in Argentina, Chile, Cuba, Colombia, Ecuador, Mexico, Panama, Peru, and Dominican Republic. Eleven more countries in the world are part of the initiative.

The results of the project in participating health centers in the region show an increase of about 30 percent in the number of people with hypertension who are undergoing treatment, and a similar increase among people who have their blood pressure controlled.

— Hearts in the Americas