Washington, DC, February 24, 2016 (PAHO / WHO) -- The Pan American Health Organization/World Health Organization (PAHO/WHO) has released its 2016 calendar on the benefits of breastfeeding, which features illustrations by the Argentine cartoonist Fernando Sendra. 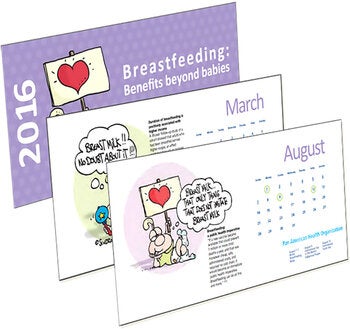 Published each of the last three years, the calendar aims to promote PAHO/WHO recommendations on breastfeeding, which call for exclusive breastfeeding babies for their first 6 months, followed with continued breastfeeding with complementary foods up to 2 years or more. Globally, only a third of babies are exclusively breastfed for 6 months as recommended.

Illustrations in the calendar feature the main character of Sendra's comic strip "Yo, Matías" as a diapered baby who offers up reasons why he favors breastfeeding. The calendar also provides more serious information on breast milk and highlights key days of the year that are related to health. It can be downloaded for free from PAHO's website (see link below).

"Breastfeeding benefits mothers and children regardless of birthplace or the level of development of a country. But in the Americas, breastfeeding rates are not improving, and in some countries, they're declining, said Chessa Lutter, PAHO senior advisor on nutrition and food. "We hope the scientific evidence presented in the calendar on the benefits of breast milk for children, mothers, the environment and the economy will help to promote breastfeeding as well as a healthier, more equitable society."

Fernando Sendra, a PAHO Champion of Health, has been drawing Matías comics as part of PAHO's campaigns to promote breastfeeding in the Americas since 2002.