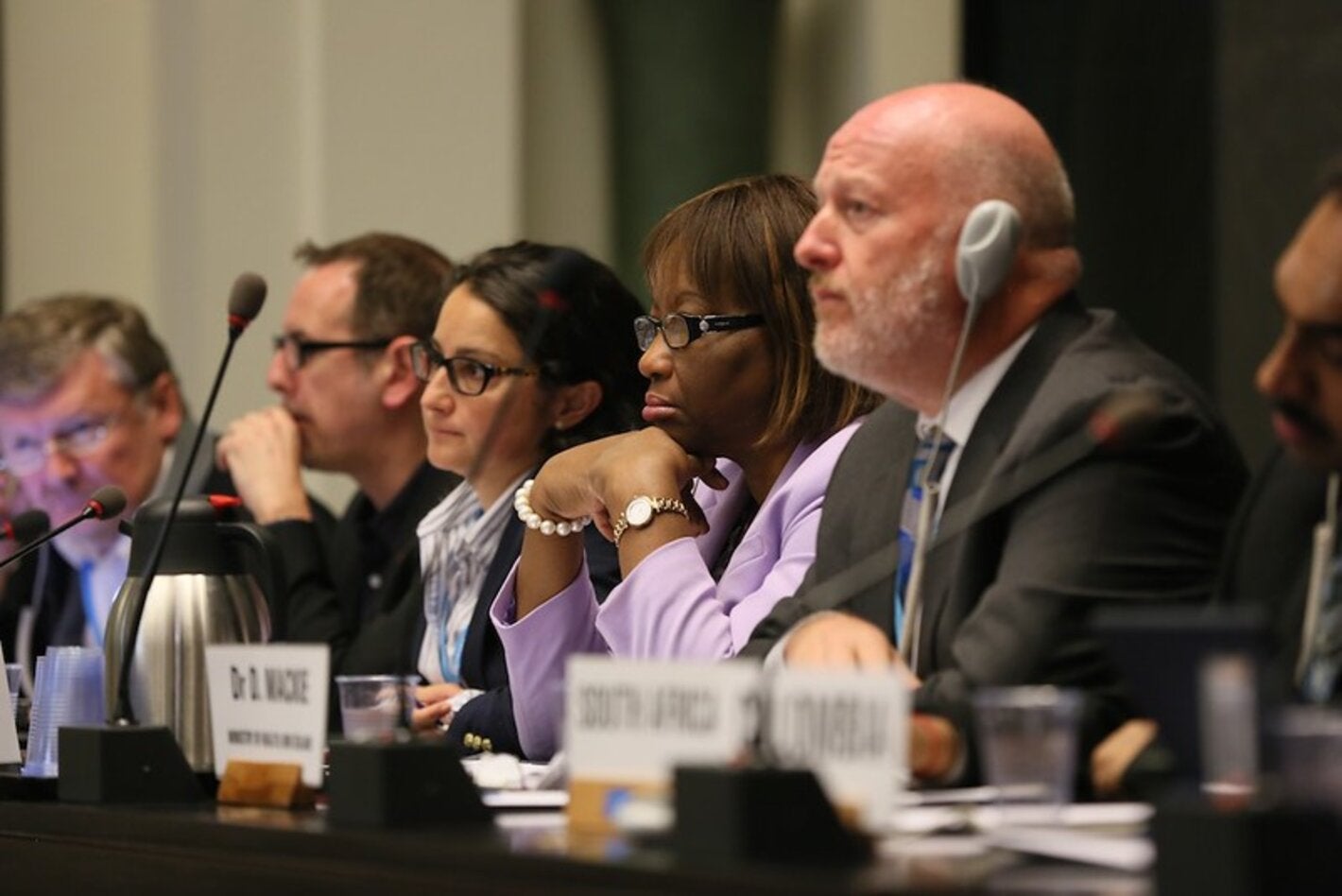 Geneva, 26 May 2015 (PAHO/WHO) -- The 68th World Health Assembly closed today after approving three new resolutions: one on air pollution, one on epilepsy and one laying out the next steps in finalizing a framework of engagement with non-State actors.

The Executive Committee of the Pan American Health Organization (PAHO) will analyze the resolutions adopted at the World Health Assembly when it meets in mid-June and will decide what their implications are for the Americas, what needs to be harmonized, and what should be promoted at the regional level and in the countries.

The resolution highlights the key role national health authorities need to play in raising awareness about the potential to save lives and reduce health costs, if air pollution is addressed effectively. It also stresses the need for strong cooperation between different sectors and integration of health concerns into all national, regional and local air pollution-related policies. It urges Member States to develop air quality monitoring systems and health registries to improve surveillance for all illnesses related to air pollution; promote clean cooking, heating and lighting technologies and fuels; and strengthen international transfer of expertise, technologies and scientific data in the field of air pollution.

The resolution asks the WHO Secretariat to strengthen its technical capacities to support Member States in taking action on air pollution. This includes further building capacity to: implement the "WHO air quality guidelines" and "WHO indoor air quality guidelines; conduct cost-benefit assessment of mitigation measures; and advance research into air pollution's health effects and effectiveness. At the Sixty-ninth World Health Assembly, WHO will propose a road map for an enhanced global response by the health sector that reduces the adverse health effects of air pollution.

Delegates endorsed a resolution urging Member States to strengthen their ongoing efforts in providing care for people with epilepsy. Although affordable treatment for epilepsy exists, up to 90% of people with the condition may not be properly diagnosed or treated in resource-poor settings. The resolution highlights the need for governments to formulate, strengthen and implement national policies and legislation to promote and protect the rights of people with epilepsy. It also stresses the need to reinforce health information and surveillance systems to get a clearer picture of the burden of disease and to measure progress in improving access to care.

Delegates emphasized the importance of training of non-specialist health-care providers as key to reducing the epilepsy treatment gap. In low- and middle-income settings, strategies to improve access and affordability of antiepileptic medicines should be a priority. Countries are encouraged to undertake public awareness activities to reduce misconceptions about epilepsy and encourage more people to seek treatment. The research capacity of low- and middle-income countries should be built through expanded academic collaboration and establishment of centres of excellence.

The resolution calls on the WHO Secretariat to continue to lead and coordinate support to Member States in addressing the global burden of epilepsy so that people with epilepsy can receive timely treatment and can benefit from educational and occupational opportunities, free from stigma and discrimination.

The Health Assembly welcomed the fact that delegates had reached consensus on many parts of the draft framework of engagement with non-State actors, noting that it wishes to finalize the framework by the next Health Assembly. Delegates requested the Director-General to convene an intergovernmental meeting as soon as possible and to submit the finalized draft for adoption at the Sixty-ninth World Health Assembly.

They asked the Secretariat to develop a register of non-State actors for next year's Health Assembly. Delegates acknowledged the importance of WHO engaging with non-State actors (nongovernmental organizations, private sector entities, philanthropic foundations and academic institutions) and of ensuring that risks of such engagement are managed robustly at global, regional and country level.

A central concern of this year's World Health Assembly was the Ebola outbreak in West Africa and other emergencies. Delegates welcomed WHO's commitment to make important changes in its emergency response work. WHO will establish a new emergency response capability based on all-hazards preparedness with an emphasis on adaptability, flexibility, accountability, humanitarian principles, predictability, opportunity and country ownership. WHO also plans to establish a contingency fund of US$100 million to finance emergency field operations for up to three months. The contingency fund will initially operate as a two-year pilot program and will be evaluated after that time.

Other actions by the World Health Assembly included:

Delegations from the Americas played a central role in discussions on all these issues by leading working groups or working on resolutions behind the scenes.

The World Health Assembly is the top decision-making body of the World Health Organization (WHO). Its main functions are to determine WHO's policies, elect the Organization's Director-General, supervise financial policies, and review and approve the proposed WHO budget.