Ectoparasites are pathogens that usually infect only the superficial layers of the skin1. Although the term ectoparasites can broadly include temporarily blood-sucking arthropods such as mosquitoes, this term is generally used more narrowly to refer to pathogens such as ticks, fleas, lice, parasitic flies and mites that attach or burrow into the skin and remain there for relatively long periods of time2.

Among the ectoparasitoses there is a family of diseases of importance in public health denominated epidermal parasitic skin diseases. The parasitic diseases in this group bear the characteristic that in parasite-host interactions are confined to the upper layers of the skin. They are prevalent in resource-poor settings and are associated with important morbidity3.

Reliable data on the epidemiology, immunology, and therapy of epidermal parasitic skin diseases and on the biology of the pathogens remain scarce4. Whereas pediculosis and scabies are ubiquitous, cutaneous larva migrans and tungiasis (sand-flea disease) occur mainly in hot climates. The prevalence of ectoparasitoses in the general population is usually low but can be very high in vulnerable population groups5.

Epidermal parasitic skin diseases occur sporadic, endemic, or epidemic. The prevalence of ectoparasitoses in the general population is low, but can become high in vulnerable groups. For example, tungiasis usually affects less than 1% of the population in an endemic area, but in economically disadvantaged communities prevalence in children can be up to 80 %. In some indigenous populations in the Amazon rain forest, nearly all individuals have head lice3,5. Stigma, lack of access to health care and risk behavior are the reasons why epidermal parasitic skin diseases frequently progress untreated and why in resource-poor populations severe morbidity is common. The ongoing uncontrolled urbanization in many developing countries makes it likely that this group of diseases will remain the overriding parasitic diseases for people living in extreme poverty3. Ectoparasitoses of interest in public health were included as part of the diseases for which the regional epidemiological situation needs to be assessed.

Pediculus humanus capitis
Of the three lice species affecting humans, the head louse is the most frequent. Pediculosis of the head affects millions of school-age children all over the world. In developing countries, prevalence of pediculosis in vulnerable parts of the population can be over 50% (1). Transmission is by close head-to-head contact and rarely through fomites such as hats, clothes, or pillowcases. Persistent infection is often associated with secondary infection of the scalp and is an important cause of impetigo in developing countries. Because of pruritus, subsequent sleep disturbances and difficulties in concentration, children with pediculosis capitis may perform poorly in school (2).

Pediculus humanus corporis
Body lice, which attach to clothes, are propagated when clothes are not washed or changed regularly, and usually affect homeless people, displaced persons, or prisoners in poor conditions. This body louse is feared as a vector for Rickettsia prowazekii (epidemic typhus), Borellia recurrentis (relapsing fever), and Bartonella quintana (trench fever).


Pthirus pubis
Infests pubic hair and occasionally other hairy areas, such as eye lashes. Pubic lice are usually transmitted during intimate body contact, such as during sexual intercourse. Treatment must therefore include the patient's partner. Rash and pruritus are the most frequent symptoms (2).

Scabies, caused by the mite Sarcoptes scabiei var. hominis, leads to itching eruptions of the skin and is predominantly transmitted by person-to-person contact. The importance of transmission via fomites (e.g., clothes, towels, bed linen) depends on the setting. Scabies is particularly prevalent in resource-poor conditions and among children, and is associated with insufficient access to health-care. The predominant symptom of scabies is an intense pruritus, which disturbs the sleep and can be debilitating. Disruption of the skin's protective barrier function promotes secondary bacterial infections, which can lead to potentially life-threatening, complications such as post-streptococcal glomerulonephritis (1,2). Scabies impairs the life quality of children and adults alike.

The parasite burden of individuals with scabies is usually low. An average burden of 10-12 mites has been determined for the first 3 months of the infection. However, hundreds of mites can be found in neglected children in underprivileged communities, and millions in patients with crusted scabies (3).

Tungiasis is a parasitic skin disease caused by the penetration of female sand fleas (Tunga penetrans; in some areas also T. trimamillata) into the skin. With less than 1mm T. penetrans is the smallest flea species known. The parasite burrows rapidly into the skin at the toes, the sole, the lateral rim of the foot or the heel. Ectopic penetration occurs in less than 1 %. Once embedded in the epidermis, the female flea increases its body volume by a factor of 2000 within two weeks. This is paralleled by an intense local inflammation resulting in difficulty walking. Bacterial superinfection of the lesions is almost constant, leading to the development of abscesses, suppuration or lymphangitis. Tungiasis is a zoonosis affecting humans and animals alike (1).

Around the world tungiasis has various local names including jiggers, chigoe, pique or nigua, indicating that the disease has been prevalent in many populations for a long time. Tungiasis occurs in endemic proportions among marginalized, resource-poor urban and rural communities in sub-Saharan Africa, South America and many several islands in the Caribbean (1). Prevalence may be up to 60% in children and 30% in the general populations. However, there is no data in any country of the accurate geographic distribution and age-specific prevalence. In most endemic areas transmission is seasonal, with the highest incidence during the dry season. When transmission occurs indoors, incident cases appear the whole year round (2).

Due to pain and itching, children have difficulties to concentrate on their lessons and have difficulty in sleeping and walking. Tungiasis has recently been demonstrated to significantly impair the quality of life of children. Infection is often associated with stigma, with victims being ridiculed, and they consequently isolate themselves. Since tungiasis impairs mobility and concentration, it impacts children's ability to learn and to get jobs. Similarly, tungiasis affects adults' ability to conduct their work, whether it be a paid job or on their own farm (2).

Hookworm-related cutaneous larva migrans (Hr-CLM) is a parasitic skin disease caused by the penetration of feline or canine hookworm larvae into the human epidermis. The most frequent species are Ancylostoma braziliense, Ancylostoma caninum and Uncinaria stenocephala. In humans, the larva is unable to cross the basal membrane of the epidermis and migrates in the compartment of the epidermis until it dies spontaneously after a few weeks to several months. The migration of animal hookworm larvae causes a typical elevated erythematous linear or serpiginous track known as "creeping eruption ". Hr-CLM is associated with intense pruritus. The resulting scratching leads to denudation of the skin, which facilitates bacterial superinfection of the lesion. Additional skin injury may be caused by inappropriate surgical manipulation of the lesion and treatment with toxic substances (1,2).

The migration of hookworm larva in the skin causes an intense inflammation leading to persistent itching. Itching is so intense that patients cannot sleep normally. Lesions tend to become superinfected with pathogenic bacteria as a result of scratching. Staphylococcus aureus and streptococci are particularly common causes of super-infection of lesions. If lesions remain infected with group A streptococci for a prolonged period of time, post-streptococcal glomerulonephritis may ensue, eventually leading to renal insufficiency. Hr-CLM severely impedes the quality of life in adults as well as in children (3).

Whereas animal hookworm species parasitize dogs and cats worldwide, Hr-CLM is mainly seen in tropical and subtropical areas in South America, the Caribbean, Africa and South-East Asia. Sporadic cases have been reported in Europe. In semi-arid northeastern Brazil, prevalence ranged from 0.2% to 4.4% in the general population and from 0% to 14.9% in children <5 years. No population based data exists for other endemic areas. Known risk factors are male sex, young age, living in a house without a solid floor and barefoot walking. An association with low income has been suspected (1).

Ectoparisitic Diseases in the Region of the Americas:
Developing a Roadmap to Determine the Regional Epidemiological Situation and Identify Actions to Reduce the Impact

Situation on Tungiasis in indigenous communities of Brazil. 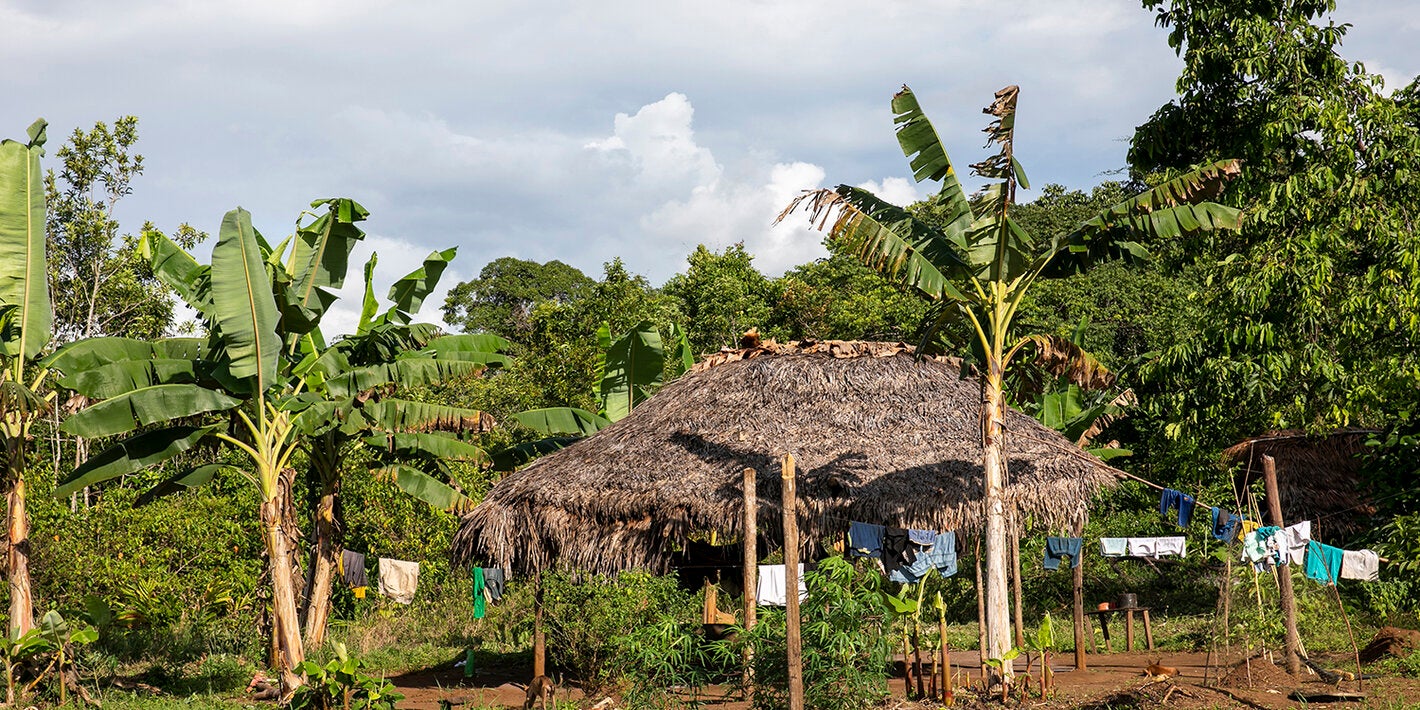 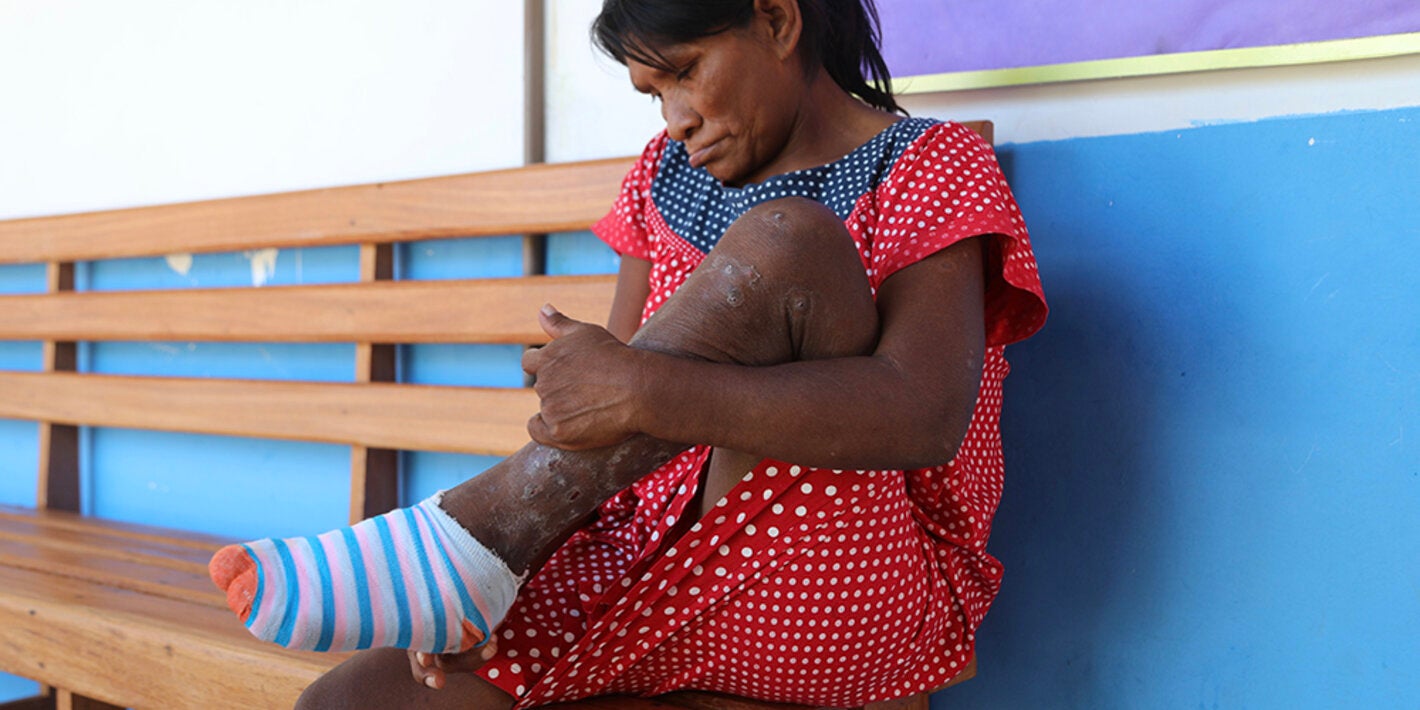 26 Aug 2020
Tungiasis and the guardians of the Amazon 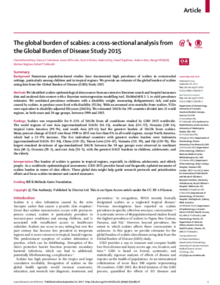 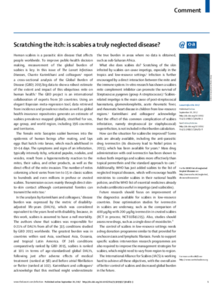 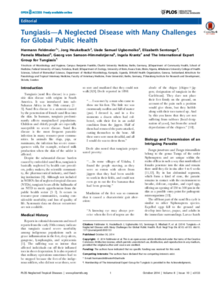 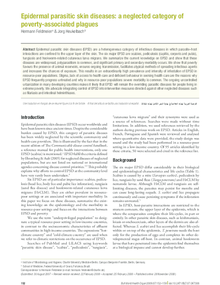 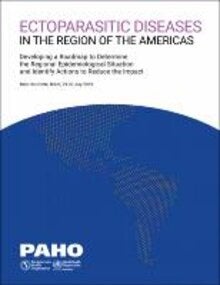 9 Jul 2020
Ectoparisitic Diseases in the Region of the Americas: Developing a Roadmap to Determine the Regional Epidemiological Situation and Identify Actions to Reduce the Impact