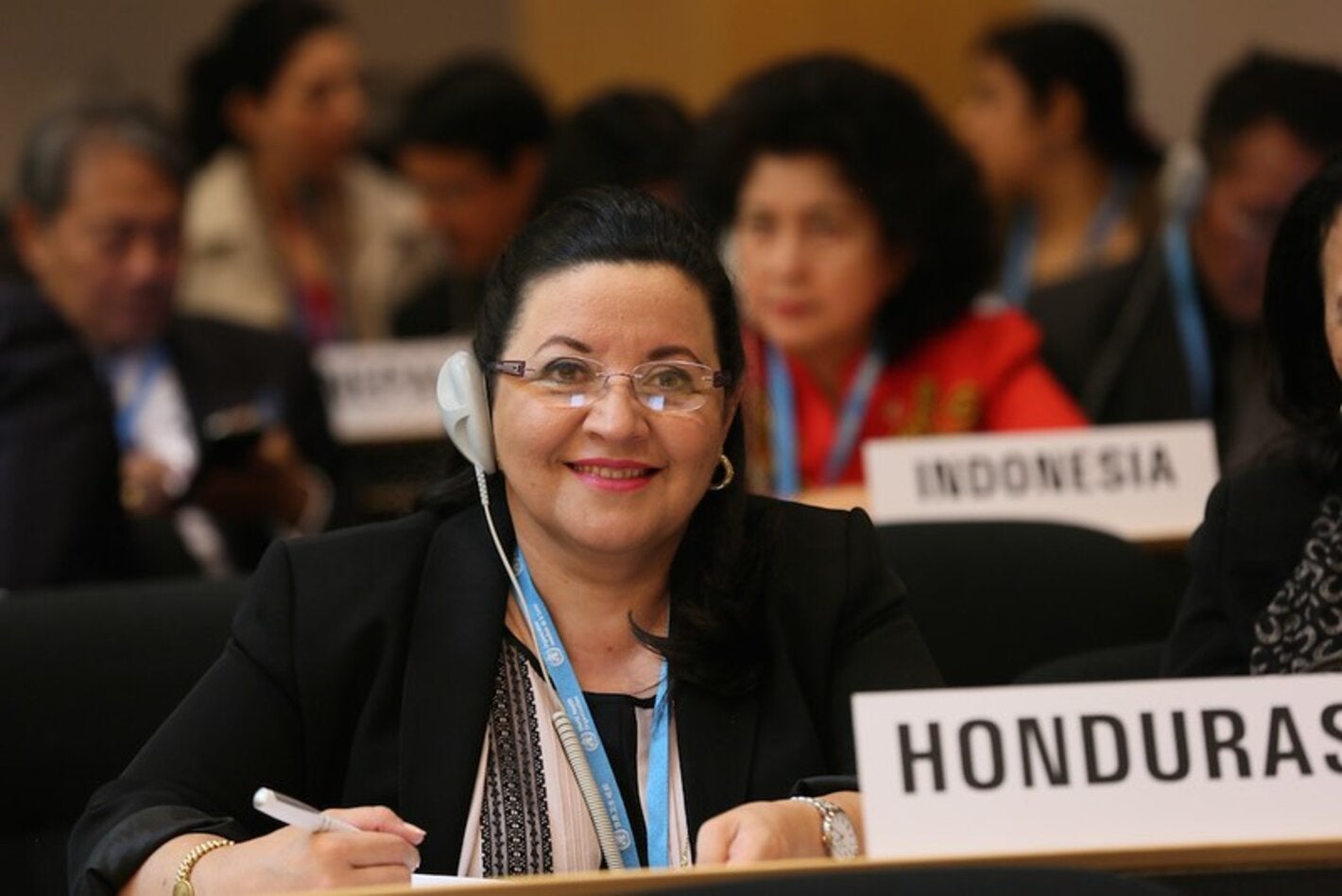 Geneva, 20 May 2015 (PAHO/WHO) - Health authorities of the Americas discussed the creation of resilient health systems. They also noted the challenges facing the Region, including the introduction of the chikungunya virus, as well as achievements such as the elimination of rubella in the hemisphere. The delegates addressed the plenary of the 68th World Health Assembly from May 18-20.

The following is a summary of each country delegate's remarks, in order of appearance.

Chilean Health Minister Carmen Castillo stated that there is an urgent need for high-quality drugs and accessible prices within the framework of continually strengthening health systems. He said that the resiliency of these systems is not only the responsibility of the public sector and that Chile has therefore enacted reforms and regulations to strengthen them. He recalled that Chile is affected periodically by natural disasters, and that the health system has grown stronger as a result of these experiences and is better able to face those unforeseen contingencies with strong and participatory governance.

Castillo pointed out that a health system with the capacity to respond rapidly must have robust information systems and open communication with the community in order to assimilate the public's perception of certain health risks. Health promotion measures must also be included, and account must be taken of the fact that crises of any type affect the population unequally.

The Haitian delegate addressed the need to strengthen health systems in order for them to remain functional in the face of emergencies, noting that they must have coherent and integrated management from the technical and financial standpoint. He said that his country is implementing reforms to provide better access to health services in remote areas, which are already showing improvements in maternal and child health. He added that new infrastructure is under construction, although there are still areas that lack health centers.

The delegate also pointed out that the management of the cholera epidemic in Haiti highlighted the need for a coordinated response, and noted that the country has an action plan to combat this disease. He added that it is also necessary to work on the resiliency of the community so that it can face and overcome the challenges that arise in this context.

The delegate from Panama stressed that her country is working hard toward the goal of universal health coverage and universal access, through measures such as the expansion of basic services. The delegate added that Panama aims to strengthen implementation of the International Health Regulations (IHR), and she discussed the impact of vector-borne diseases, such as dengue, as well as non-communicable diseases.

Jamaican Health Minister Fenton Ferguson referred to the challenges facing various health systems, including the ability to retain specialized human resources to work in the country. In this regard, the goal is to strengthen training and other measures within the framework of health system reform in order to make progress toward universal health coverage and universal access.

Ferguson pointed out that Jamaica and other low- and middle-income countries are struggling to obtain affordable vaccines, and urged the other countries to continue to work toward this goal. The minister also referred to the strengths and challenges in the health system identified in the evaluation conducted in preparation for the potential introduction of Ebola into the country. He noted that globalization, climate change, and the arrival of previously unknown diseases to the hemisphere are problematic, citing the impact of the chikungunya virus on the region.

Ecuador: Right to health at the core of strengthening health systems

David Acurio, Deputy Minister of Governance and Health Surveillance, stated that it is impossible to speak of universal health coverage and universal access without addressing the right to health. He emphasized that health must be considered a public good in order to ensure resilient systems and have the capacity to face new challenges.

In this regard, Acurio pointed out that the region now faces the challenge of a new virus, chikungunya. Confronting this disease requires not only an urgent response but also a focused approach to neglected diseases through primary care services. "To the extent that all countries guarantee health services, we will reduce these diseases by providing quality services to everyone," he affirmed, adding that that can only be achieved if health is considered a right.

Honduran Health Minister Yolani Batres emphasized the fight against communicable diseases such as dengue and chikungunya. She indicated that Honduras has established intersectoral coordination mechanisms, among other policies, in order to devise comprehensive plans to deal with this issue.

"It makes us proud to be a member country of the first Region to achieve the eradication of rubella and congenital rubella, and we are grateful to the Pan American Health Organization for its ongoing support in this regard," said Batres.

The Health Minister noted that Honduras has placed special emphasis on improving the management of drugs and supplies to ensure low-cost access to them. She also reported on the health system reforms that place Honduras "on a clear path to universal access and universal health coverage."

Barbados: The impact of noncommunicable diseases on health systems

The Minister of Health of Barbados, John Boyce, called upon WHO and the Member States to acknowledge the burden that noncommunicable diseases place on health systems, and to consider them a priority when evaluating the resiliency of these systems. He asserted that health systems should not be thought of solely as a response to natural disasters or the emergence of infectious diseases, when noncommunicable diseases account for 80% of hospitalizations and 50% of health costs.

The minister asked WHO to introduce measures to facilitate cooperation with regional agencies such as PAHO and others, to help establish resilient health systems for emergencies as well. He emphasized that these systems require effective intersectoral coordination mechanisms to maintain the physical, social, and economic infrastructures of the systems.

The application of the Framework Convention on Tobacco Control, the first public health treaty in history, "is threatened by the actions of multinational tobacco corporations that use trade and investment protection agreements to attack national public health policies," said Uruguayan Health Minister Jorge Basso.

Basso recalled that the Philip Morris Company filed a request for arbitration against Uruguay with the International Centre for Settlement of Investment Disputes (ICSID) over tobacco control measures. "I would like to thank WHO and PAHO for filing amicus curiae briefs that provided scientific evidence, strengthening the public health aspect," said the minister.

The minister referred to the concern that countries have over the burden of non-communicable diseases for which tobacco use is a risk factor. He also reported on Uruguay's health system reform experience.

Saint Kitts and Nevis: Support for the strengthening of health systems on small islands

The sustained provision of resources and technical assistance for small island nations is a key element in the construction of solid and resilient health systems, said Wendy Phipps, the Minister of Health of Saint Kitts and Nevis.

"We seek partnerships in health and development based on respect for human rights, and mutual benefits as we cooperate on all issues related to human and environmental health," she said. Phipps acknowledged organizations such as PAHO, among others, for their support in all areas. She stated that a resilient system needs adequate, predictable, and continuous funding in order to maintain competent health workers, as well as drug supplies, equipment and technology, and good health care facilities.

Paraguay: Vector-borne diseases and their burden on health systems

Speaking before the plenary, Paraguayan Health Minister Antonio Barrios referred to vector-borne diseases such as dengue, malaria, and chikungunya, and their impact on society and health systems. "We have to consider the high disease and mortality burden and the costs that vector-borne diseases represent for the country," he said, referring to the resiliency of health systems in terms of responding to the population and attaining universal health coverage.

Barrios called for reflection about how community activities can be used to reduce the incidence of vector-borne diseases through proper management of the environment. He pointed out that Paraguay has been developing effective strategies using different interventions to confront these threats and has managed to make significant progress in the control of malaria and Chagas disease. It has also worked to contain outbreaks of dengue and, more recently, chikungunya. He also emphasized the need for the creation of an international fund to support these strategies at the regional level.

Trinidad and Tobago: Creating resiliency in the community must also be a health priority

The delegate from Trinidad and Tobago said that resiliency in the community must also be a priority for the health sector. He stated that his country has worked to improve disaster preparedness not only at the government level but also at the grassroots level, allocating resources to programs that educate and empower citizens to adopt behaviors that preserve the well-being of their families.

The delegate added that this entails a number of activities ranging from the formation of community disaster response teams to programs at schools. It also has a component linked to health care services and the training of health workers. He further stated that his country is working to implement the IHR in all its capacities.

- Speeches of other ministers of the Americas