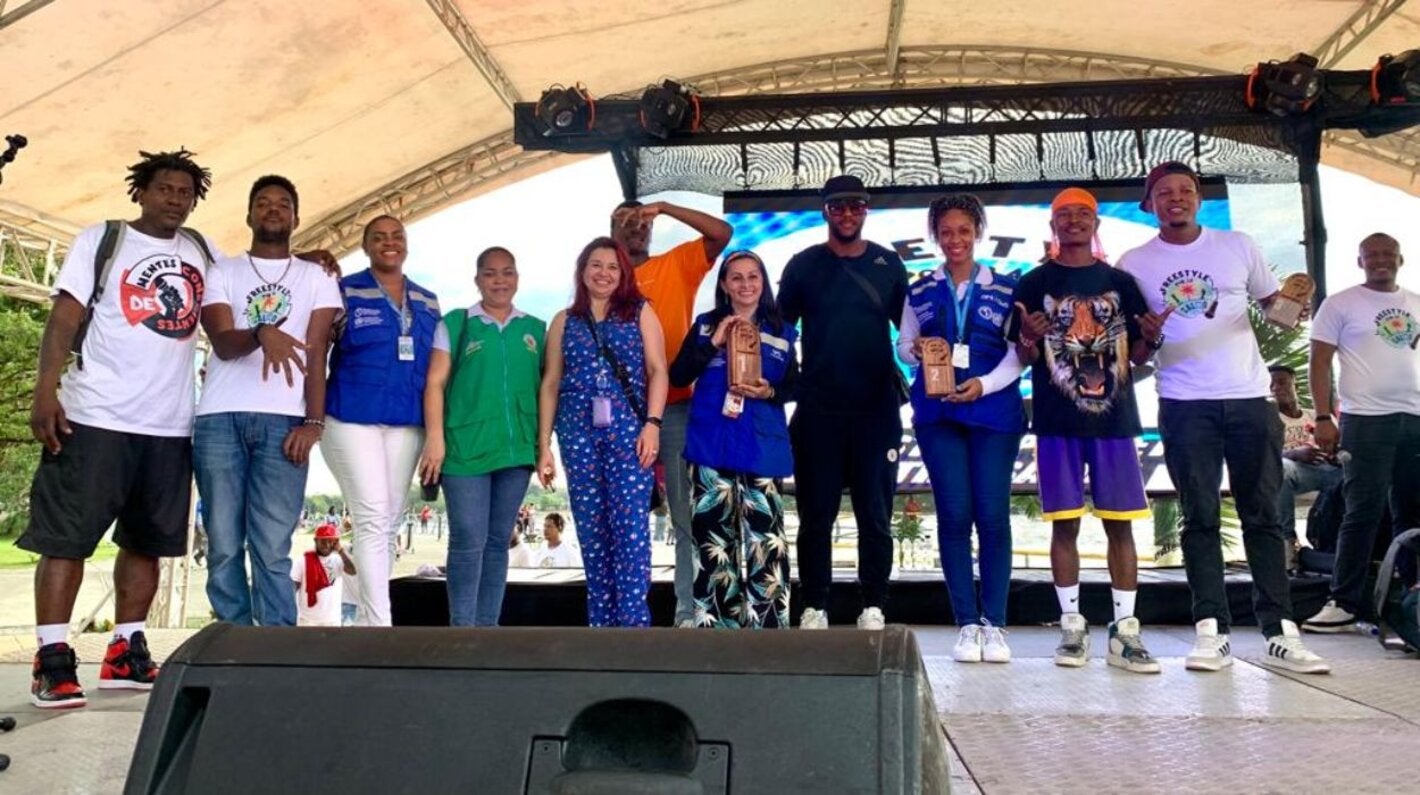 Quibdó, November 19, 2022 (PAHO) - During a Hip-Hop “freestyle” competition, young artists took music to the streets  to promote disease prevention and health advocacy, with a particular emphasis on COVID-19 vaccination in Chocó, a state in western Colombia.

The contest, which took place in the city of Quibdó, was organized by the Pan American Health Organization (PAHO/WHO) with the cooperation of the Government of Canada and together with Chocó’s Health Secretariats, and the local Municipality.

Young descendants from the region’s Afro communities with multicultural links to the Embera, Wounnan, and Tule indigenous communities, improvised songs with messages addressed to the Chocó inhabitants in an event on the traditional boardwalk of Quibdó.

“This is an innovative health action, proposed by the residents themselves, which encourages health promotion and prevention on issues such as vaccination, breastfeeding, and malaria, through art and music," said Gina Tambini, PAHO's Representative in Colombia.

In the first months of 2023, the contest winners will perform musical sessions in the municipalities of Litoral del San Juan, Cértegui, Tadó, Medio San Juan, Istmina, and Condoto, on the banks of the San Juan River, in Bagadó, along the Andágueda River, in Medio Atrato, Vigía del Fuerte and Bojayá, near the Atrato River, and in the municipalities of Nuquí, Bahía Solano and Juradó, on the Pacific Coast.

The rainforests of the Chocó, one of the areas with the highest concentration of biodiversity on Earth, are home to Afro-descendant communities and 513 Indigenous communities settled near three major rivers, Atrato, Baudó, and San Juan.

Tambini noted that as part of the commemoration of World Health Day, observed on April 7 and the anniversary of the creation of the World Health Organization in 1948, this year there has been a call to put the health of people and the planet at the center of activities and foster a movement to create societies focused on wellbeing. "We invite everyone in Colombia to create and bring to life new stories about the actions being taken to protect our planet and health," she said.

"The invitation to all is to envision a world where clean air, water, and food are accessible to all, economies are centered on planetary and human health and well-being, and healthy cities, towns and communities are focused on people so that they can create conditions for a better life. Everything is interconnected; the problems, the solutions, and us," added  Tambini.

The "freestyle”  contest, organized along with the local cultural organization Dementes Conscientes, also featured traditional dances, artistic interventions, and reflections to understand health care through traditions of Chocó, such as ancestral medicine and the midwifery practice.