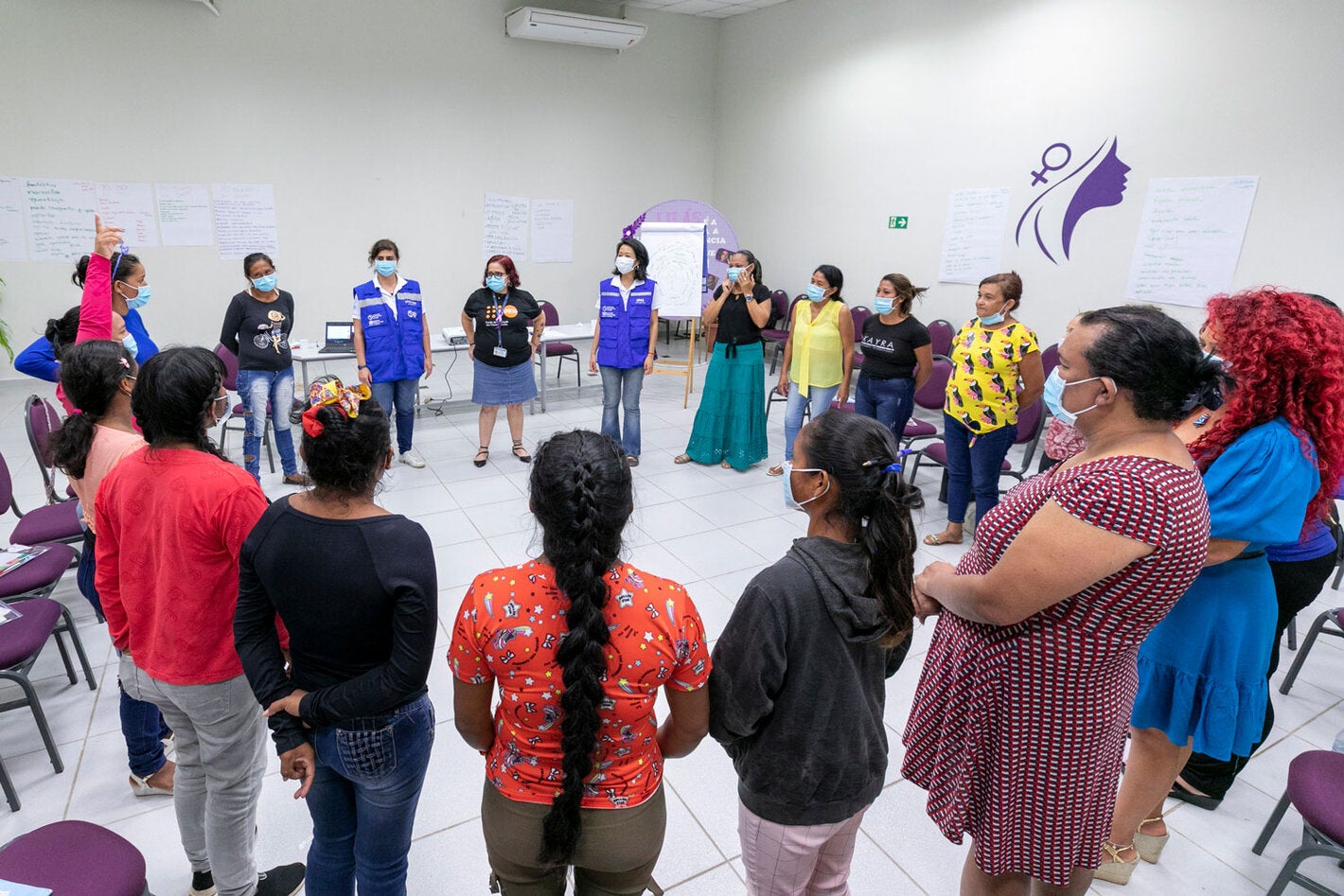 This Network counts on state, municipal, and federal public services, such as the Brazilian Women's House where the workshop was held and that integrates several institutions active in the protection of women in situations of violence, such as the Special Court, Specialized Nucleus of the Prosecutor's Office, Specialized Nucleus of the Public Defender's Office, Specialized Police Station for Women's Services, temporary shelter, and psychosocial support and economic autonomy services.

The initiative brought together 20 community leaders, including Venezuelan migrant and refugee women, indigenous women from the Warao and Eñepa ethnic groups, and Brazilian women. Through active methodologies, such as dialogue circle and group dynamics, the participants were able to share experiences, knowledge, and tools for the implementation of actions to prevent violence against women in the community. The workshop took place between August 15th and 18th of this year.

Yorgelis Bastardo, an indigenous Warao and UNFPA cultural facilitator, said that the activity nourished her knowledge and that she will now pass it on to other women in her community.

"The workshop was very important for me because we nourished ourselves with knowledge.  The concepts, the dynamics, and the presentations helped me a lot to receive the knowledge and prepare myself to pass it on to other women", highlighted Yorgelis Bastardo. 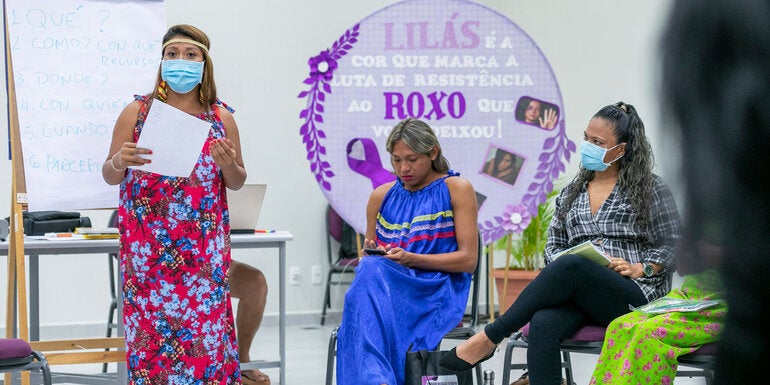 During the training, the causes and types of violence, risk factors and prevention strategies, inequalities and gender roles, women's rights, organization of the network of services and reception and care, referral flows, Brazilian legislation for assistance and protection, self-care, and other topics were addressed.

The action has the financial support of the Bureau of Population, Refugees, and Migration of the U.S. Department of State.

Actions in the community

During the workshop, the participants were motivated to promote actions to prevent violence against women in their communities. In the weeks following the training, dialogue circle were held, prevention and hygiene kits were handed out, and leaflets were distributed with the information of services for dealing with cases of violence.

The activities, carried out in the communities and in the Operation Welcome (Operação Acolhida), also included actions on violence prevention and combined prevention of HIV and sexually transmitted infections (STI) with sex workers in Boa Vista, as part of a project to strengthen local capacities in this area carried out by PAHO, the Brazilian Ministry of Health, and the State Health Secretariat of Roraima.

Operation Welcome is the Brazilian government's humanitarian response to the influx of the Venezuelan population in the country and is supported by several agencies of the United Nations (UN) and civil society.

The strengthening of health actions, including the empowerment of community leaders, is a fundamental dimension of the prevention of violence against women in humanitarian contexts. 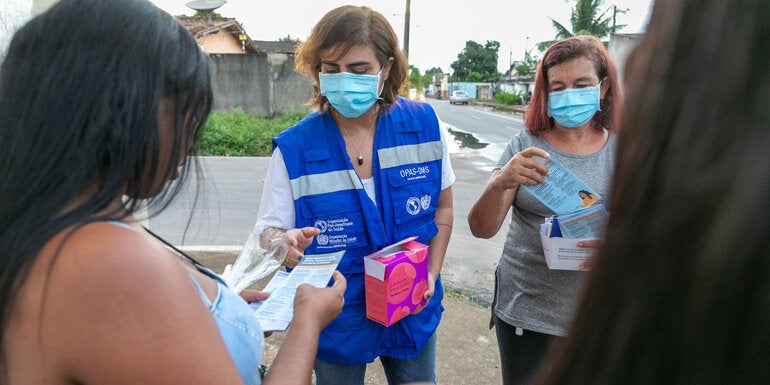 "We, as immigrants, suffer many forms of discrimination. Many Venezuelan women suffer with violence, verbal abuse, in their jobs," says Venezuelan Nilsa Hernandez, one of the workshop participants, who also works as a combined prevention agent for sexually transmitted infections for PAHO. 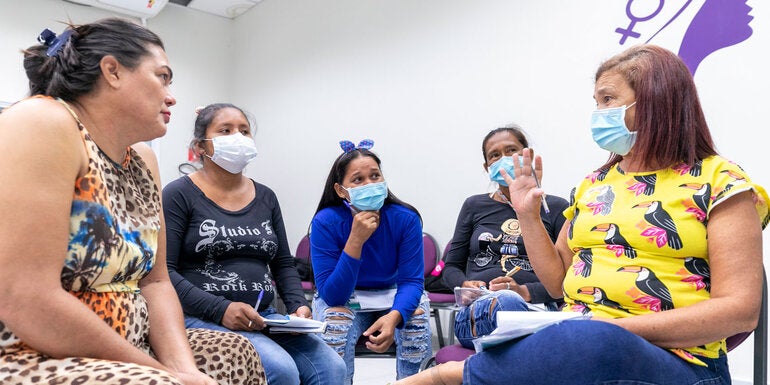 She stressed the importance of access to information about rights, essential services, protection services, health, and social assistance. "I believe this workshop was one of the best I have ever attended for educating us and teaching us how to defend ourselves and the tools we have available. We went in one way and came out another, with more strength to keep fighting, including knowing which institutions to turn to in a situation of violence," she concluded.

Prevention of violence against women

Data from the Brazilian Public Safety Forum on the incidence of violence against girls and women in Brazil indicate that, in 2021, one in four women in the country over 16 years of age (about 17 million people) said they had suffered some type of physical, psychological, or sexual violence in the last 12 months. In the most vulnerable populations, such as migrant and refugee women, the risks of suffering violence are even greater, as are the barriers of access to protection and shelter services. Initiatives like the workshop in Boa Vista are important factors in reducing these impacts and multiplying information accessible to these women and their communities.

Violence – in all its forms – can impact a woman's health and well-being for the rest of her life, even long after the violence has ended. It is associated with increased risk of injury, depression, anxiety disorders, unplanned pregnancy, sexually transmitted infections including HIV, and many other health problems. It impacts society as a whole and generates enormous costs, impacting national budgets and development. 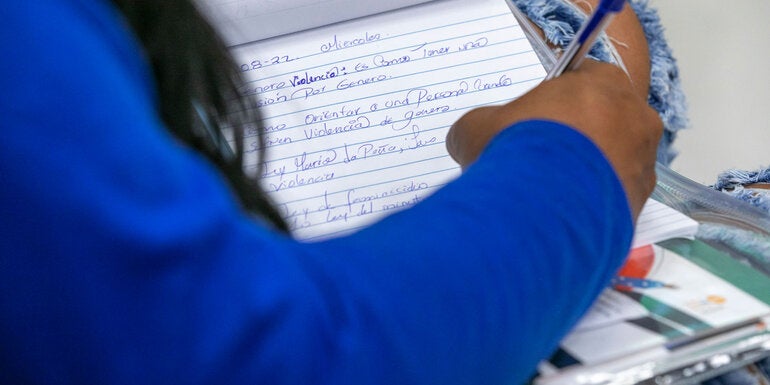