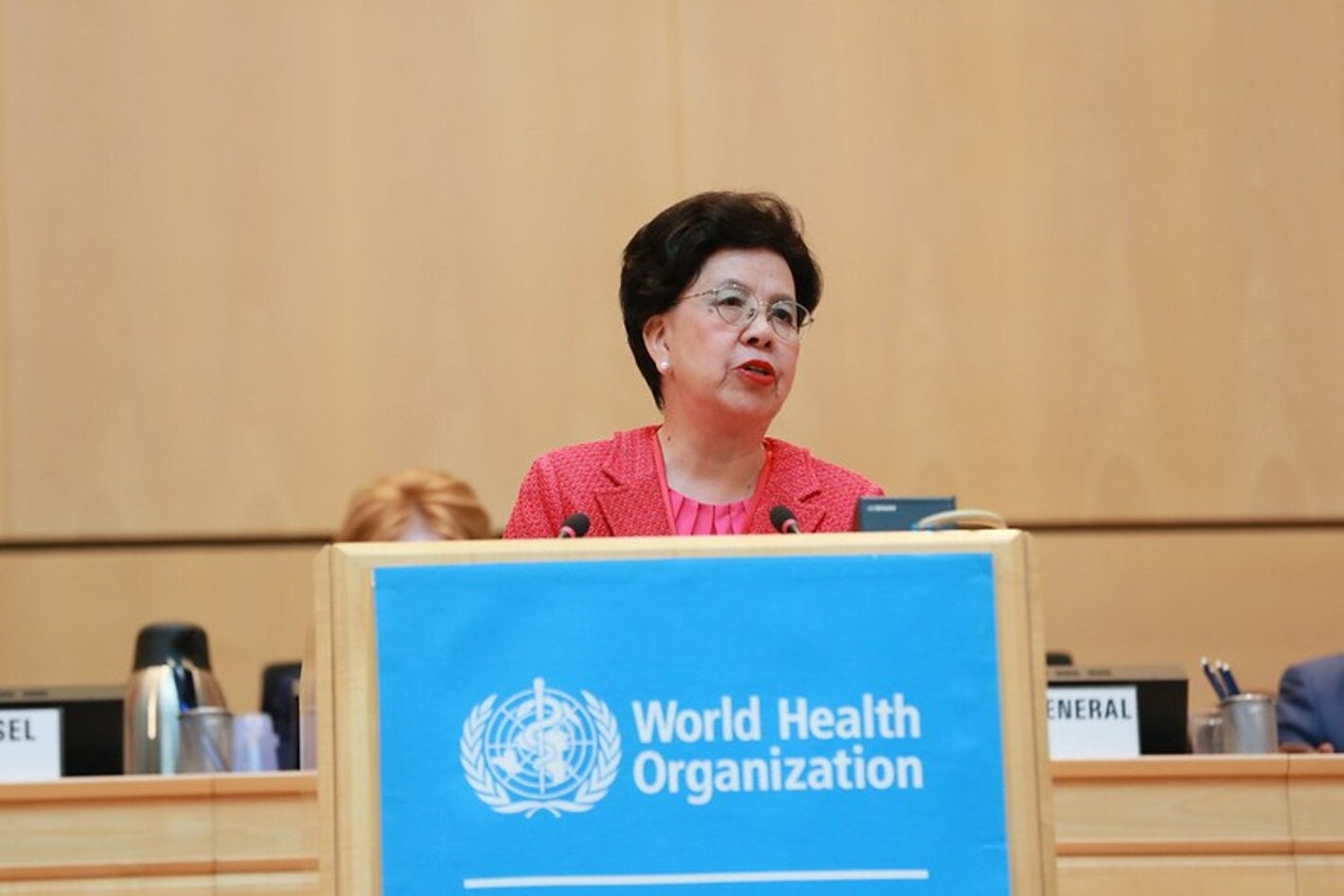 Geneva, May 22, 2017 (PAHO/WHO) - The 70th World Health Assembly (WHA70) opened today in Geneva, Switzerland. It will include numerous activities on the issues to be addressed during the session, which ends on May 31. The delegations of the Region of the Americas played an active role in planning these activities.

In her opening address at the Assembly, and in her last remarks as Director-General of the World Health Organization (WHO), Margaret Chan offered delegates advice to consider as they "continue to shape the future of this Organization."

Chan called on the World Assembly, which includes representatives of 194 countries, to make the goal of "reducing inequities" a guiding ethical principle, stating that "WHO stands for fairness." She said countries should also work to improve data collection and create the most responsible health strategies possible.

Protecting scientific evidence should form "the bedrock of policy," Chan said, citing resistance to vaccination as one of the reasons that the "tremendous potential for the vaccines has not yet been fully realized."

The Director-General stressed the importance of continued innovation, and cited the research partnership between WHO and others to produce an effective and highly affordable meningitis A vaccine, which has transformed the lives of millions of people in Africa. "Meeting the ambitious targets in the Sustainable Development Goals depends on innovation," she said.

Chan then asked governments and partners to safeguard WHO's integrity in all stakeholder engagements. "The framework for engagement with non-state agents is a prime instrument for doing so," she said, as is "listening to civil society." Civil society organizations "are the ones best placed to hold governments and businesses, like the tobacco, food, and alcohol industries, accountable. It is they that can give the people who suffer most a face and a voice," she added.

In closing, Chan asked the countries' representatives to "Remember the people. Behind every number is a person who defines our common humanity and deserves our compassion, especially when suffering or premature deaths can be prevented."

New Director-General of WHO to be elected

Tomorrow, Tuesday May 23, the WHO Member States will elect a new Director-General, who will hold office for five years, until July 1, 2022.

The three nominees for the post--Tedros Adhanom Ghebreyesus of Ethiopia, David Nabarro of the United Kingdom of Great Britain and Northern Ireland, and Sania Nishtar of Pakistan--will each address the Assembly for 15 minutes this afternoon at 2 p.m. Geneva time (8 a.m. in Washington, DC). Tedros will speak first, followed by Nabarro, and then Nishtar. The three speeches will be transmitted live.

The election will be by secret ballot, and the result will be announced once the process has been completed. The Director-General elect will take the oath of office in a public ceremony that will also be transmitted live.

- More on the election of the new Director-General

In the opening session, the Region of the Americas called for work to achieve "transparent, balanced, and effective governance at all levels," and to provide "technical guidelines and efficient allocation of resources," as a continuation of the work begun by outgoing Director-General Margaret Chan.

The Minister of Health of Brazil, Ricardo Barros, presented the Region's position and added that, with the departure of Chan as Director-General, the person replacing her will face the challenge of "building on the solid foundation created by a consummate administration." The new Director must aim to carry out comprehensive and balanced implementation of the mandates agreed on by the member countries concerning relationships with non-state actors, as a step toward forging partnerships that are "better aligned with WHO's mission and free from conflicts of interest," he added.

Earlier, the World Health Assembly elected Verónica Skvortsova, Minister of Health of the Russian Federation, as its new President.

Suriname was named to the vice-presidency for the Region of the Americas at the 70th World Health Assembly, and accordingly, Suriname's Minister of Health, Patrick Pengel, will fill that post. Cape Verde, Somalia, the Democratic People's Republic of Korea, and the Cook Islands were elected for the remaining four vice-presidencies.

Molwyn Joseph, Minister of Health of Antigua and Barbuda, will chair Commission B, which deals with budgetary and management issues, and which will begin meeting on Thursday 25 May.

Other countries of the Americas were designated to occupy positions during this World Health Assembly as follows: Panama and Paraguay were named to the Credentials Committee, along with Suriname, Antigua and Barbuda, Cuba, the Dominican Republic, and the United States. Brazil will join the WHO Executive Committee, while Canada will occupy the vice-presidency of that body.

Some 3,500 delegates from the 194 WHO Member States, including a large number of the world's ministers of health, are attending this Assembly, which ends on May 31.

In this session, the delegates will be discussing ways of advancing the 2030 agenda, with a focus on building better health systems. Delegates of Brazil, the United States, Canada, Ecuador, Venezuela, and Cuba have already taken the floor; ministers from other countries of the Region will continue the process tomorrow.

- More information on the new President of the World Health Assembly

Issues to be addressed at the Assembly

In the coming days, delegates will approve the Organization's program budget for 2018-2019, and will discuss a broad range of health topics. They will adopt resolutions on WHO's response to health emergencies, International Health Regulations, and pandemic influenza preparedness, among others. They will also discuss subjects such as polio, antimicrobial resistance, access to medicines and vaccines, refugee and migrant health, improvement of vector control, adolescent health, and the management of chemicals. The Assembly will also review a number of subjects related to noncommunicable diseases, including dementia and cancer, as well as preparations for the United Nations High-level Meeting on Noncommunicable Diseases to be held in September 2018.

The Director of the Pan American Health Organization, Carissa F. Etienne, reviewed the subjects to be addressed during the World Assembly with the delegations of the countries of the Americas, considering them from the Region's perspective.

"It will be an extremely busy week for all," the PAHO Director noted. She urged the countries to consider each subject from the perspective of the interests of the Region.

Etienne was accompanied by Delia Rivas, Minister of Health of Honduras, the country that occupies the Chair of PAHO's Directing Council, and by Brazil's Minister of Health, Ricardo Barros, who chairs the group of countries representing the Region of the Americas.

- More on the issues to be addressed at the Assembly

The countries of the Americas are holding a series of joint daily events on wide-ranging topics. Today, these included:

Preparing to achieve sustainable development by 2030

At one parallel event during the Assembly, the countries agreed that opportunities to advance rapidly on the Sustainable Development Agenda 2030 should be maximized, in particular with regard to the goal of ensuring healthy lives and promoting well-being at all stages of the life cycle (Sustainable Development Goal 3).

Organized by the delegations of Bangladesh, Iran, Thailand, and Venezuela, the session focused on three key interrelated challenges for realizing the SDGs: poverty reduction, social justice, and environmental protection. The delegates also agreed that the ambitious SDG goals cannot be achieved without cost-effective, evidence-based strategies that ensure the strong inclusion of civil society, the private sector, academia, the news media, and other groups necessary for developing people-centered policies.

- More information on achieving the sustainable development by 2030

Publication of the report and recommendations of the working group on the health and human rights of women, children, and adolescents

The Director-General of WHO and the United Nations High Commissioner for Human Rights, Zeid Ra'ad Al Hussein, presented the global report on the health and human rights of women, children, and adolescents.

"It is of vital importance to act now," said Chan. "We are at a crossroads for investing in health and addressing inequalities and discrimination on the basis of international human rights law."

The health ministers of Chile, Colombia, Uruguay, and several other countries applauded the Global Strategy for Women's, Children's, and Adolescents' Health (2016-2030) as a critical step to ensuring global and national political support for human rights and the right to health.

- More information on the Publication of the report and recommendations of the working group on the health and human rights of women, children, and adolescents

Commitments of the countries of the Americas

In other news, Brazil today became the first country to make its SMART commitment as part of the United Nations Decade of Action on Nutrition 2016-2025. The Minister of Health of Brazil, Ricardo Barros, made the announcement jointly with authorities of WHO and with the PAHO Director.

Etienne congratulated Brazil and said that she hopes more countries will undertake such actions in the near future.

- More information on the commitments of the countries of the Americas