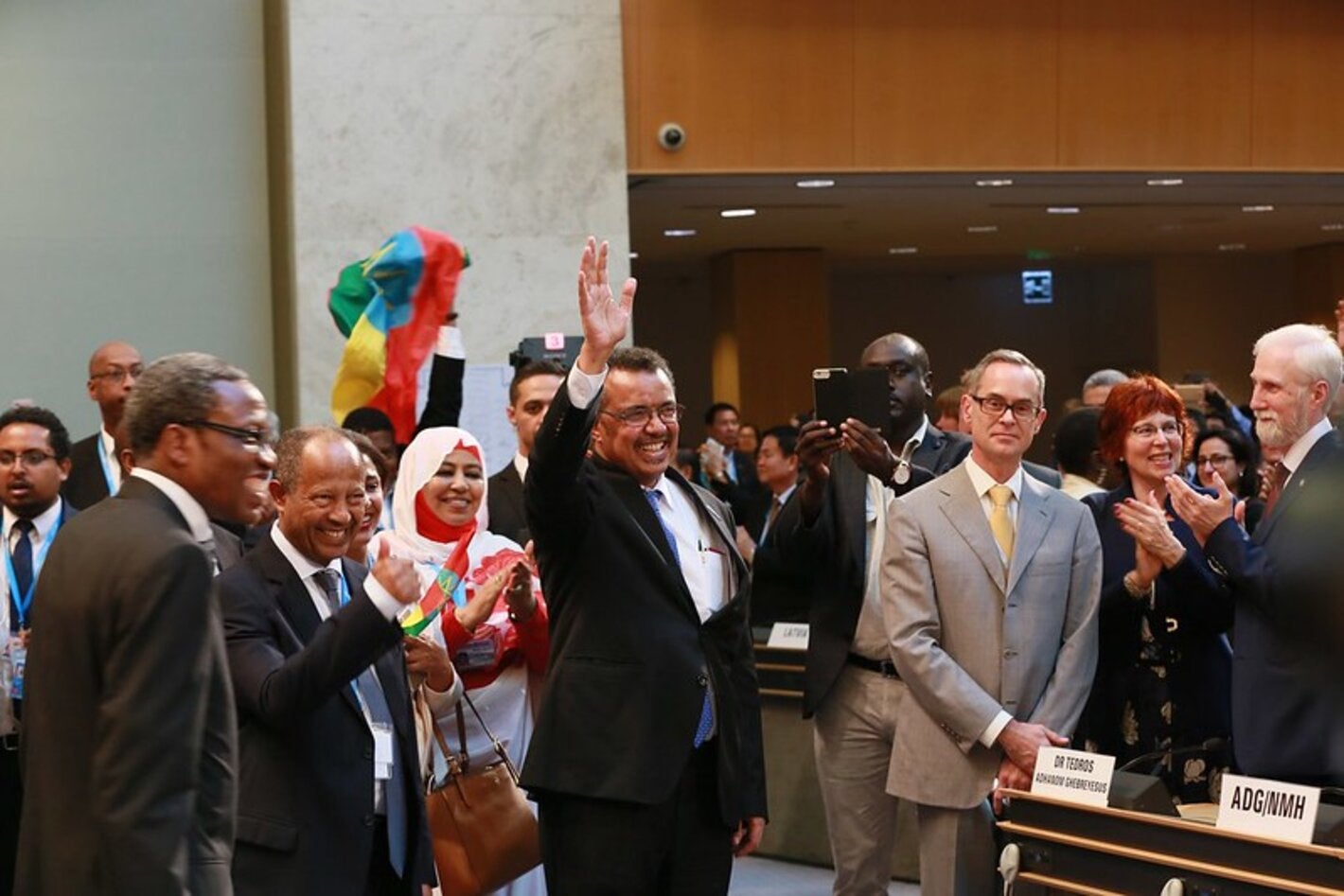 Geneva, 23 May 2017 (PAHO/WHO) - The Member States of the World Health Organization (WHO) today elected Dr. Tedros Adhanom Ghebreyesus as the new Director-General of WHO.

Dr. Tedros Adhanom Ghebreyesus was nominated for the post by the government of Ethiopia. His five-year mandate will begin on 1 July 2017. After the election, the Director-General elect was received by the 70th World Assembly, where he signed the contract for his period in office, ending in 2022, and swore the oath of office before the plenary Assembly.

Addressing the plenary for the first time, Dr. Tedros thanked the other two candidates, David Nabarro and Sania Nishtar, and appealed to them to work together. "The world needs the three of us," he said.

The Director-General elect emphasized that "all roads lead to universal coverage in health" and that only half the people in the world have access to that. He stressed that the Sustainable Development Goals (SDGs) provide an opportunity for WHO to work on ensuring that more people have access to universal health.

Dr. Tedros also indicated that he had listened to the recommendations that WHO create effective partnerships, that it be the undeniable leader in world health, and that it act more effectively, efficiently, and responsibly. He said that he will promote changes, and stressed that he will need the "voices, commitment, and support" of the Member States. "Let us work together for a healthier world," he concluded.

The Americas welcomed the Director-General elect

Representatives of the six regions that make up WHO welcomed the new Director-General. Representing the Americas, Ecuador's Vice Minister of Governance and Health Surveillance, Fernando Cornejo, congratulated Tedros Adhanom Ghebreyesus.

Cornejo underlined the commitment of the Americas to working with him for "a more dynamic, flexible, resourceful, and well-managed organization with the capacity to respond in a timely manner to the challenges we face in public health." He reiterated the Region's call to "strengthen the leadership and coordination role of WHO as a health agency of the United Nations system" and to "have solid mechanisms of communication and coordination" .

Cornejo indicated that access to drugs needs further work, along with continued efforts to reform WHO with a view to "transparency, efficiency, effectiveness and accountability, equity, and resilience, including middle-income countries."

Among other points, in this connection, he underlined the need to "promote transparency and accountability in the planning and design of the Organization's programs, as well as in the process of resource allocation of assessed and voluntary contributions, taking into account the specific characteristics, needs, and interests of all regions as far as possible."

"Count on the Region of the Americas, which has historically contributed to the adoption of innovative and effective policies for the benefit of the population, especially the most destitute," Cornejo concluded.

- Read the complete address here: Welcome address to the new Director-General of WHO by the Americas

Representatives of every world region in turn offered words of farewell to WHO Director-General Margaret Chan, who will leave the position in the next two months.

On behalf of the Americas, the Minister of Health of Suriname, Patrick Pengel, lauded Chan's leadership over the last ten years, pointing to the fact that she had guided WHO to focus on society's most vulnerable and marginalized, that she had headed the cause of women and girls, and that she was one of the principal supporters of universal health coverage.

"We salute you for strengthening global alliances for public health to better address global, regional, and country challenges," Pengel said.

"We deeply appreciate your honesty, fortitude, and foresight expressing the unique role of the Organization in global health leadership. The last ten years of your leadership have been very instrumental to reform the organization towards a new perspective of efficiency and effectiveness. We do hope the seed of change that is nurtured in this period creates the foundation for a better and vibrant WHO of the 21st Century," he concluded.

- Read the complete address here: Statement by H.E. Patrick Pengel, Minister of Health, Suriname, on Behalf of the Region of the Americas - Farewell to Dr. Margaret Chan, Director-General, WHO

About the Director-General elect

Prior to his election as WHO's next Director-General, Dr. Tedros Adhanom Ghebreyesus served as Minister of Foreign Affairs, Ethiopia, from 2012-2016 and as Minister of Health, Ethiopia, from 2005-2012. He has also served as chair of the Board of the Global Fund to Fight AIDS, Tuberculosis and Malaria; as chair of the Roll Back Malaria (RBM) Partnership Board; and as co-chair of the Board of the Partnership for Maternal, Newborn and Child Health.

As Minister of Health, Ethiopia, Dr. Tedros Adhanom Ghebreyesus led a comprehensive reform effort of the country's health system, including the expansion of the country's health infrastructure, creating 3,500 health centers and 16,000 health posts; expanded the health workforce by 38,000 health extension workers; and initiated financing mechanisms to expand health insurance coverage. As Minister of Foreign Affairs, he led the effort to negotiate the Addis Ababa Action Agenda, in which 193 countries committed to the financing necessary to achieve the Sustainable Development Goals.

As Chair of the Global Fund and of RBM, Dr. Tedros Adhanom Ghebreyesus secured record funding for the two organizations and created the Global Malaria Action Plan, which expanded RBM's reach beyond Africa to Asia and Latin America. Dr. Tedros Adhanom Ghebreyesus will succeed Dr. Margaret Chan, who has been WHO's Director-General since 1 January 2007.

The Sustainable Health Agenda in the Americas 2030

On a day when attention was focused on the election process, the delegates of the Americas also kept up a full agenda of parallel events and regional discussions on future work in the Region.

In the morning, the representatives of the Americas discussed the Sustainable Health Agenda for the Americas 2018-2030, which will be the tool for planning policies and actions to achieve higher levels of health and well-being in the Region. This agenda, which reflects the work of a group of 16 countries of the Americas, and which will be submitted for consideration and approval to the Executive Committee of the Pan American Health Organization, sets forth 11 health objectives and some 50 goals related to health that the Organization's Member Countries, in seeking to achieve universal health, will attempt to reach by 2030.

"Drafting this visionary document was very challenging," said Minister of Health of Ecuador Verónica Espinosa, who chairs the working group. "A very careful process was used to collect the contributions of the Member States in order to establish the objectives. It now requires more revisions by all" in order to reach a final agreement.

In an appeal to the delegates, PAHO Director Carissa F. Etienne said, "It is essential that all contribute to this health agenda... It is your agenda," she continued; you should take ownership of it, and you will have PAHO's total support as, together, we all seek to reach and surpass the Sustainable Development Goals for 2030 in our Region."

- More information on the Sustainable Health Agenda in the Americas 2030

In one of the parallel events to the World Assembly that were held today, a variety of subjects relating to the security of public health were examined. Mexico was among the organizers of this event, which focused on national planning, multisectoral financing, and collaboration to improve security in public health and, by extension, on health systems, including civil society and the private sector.