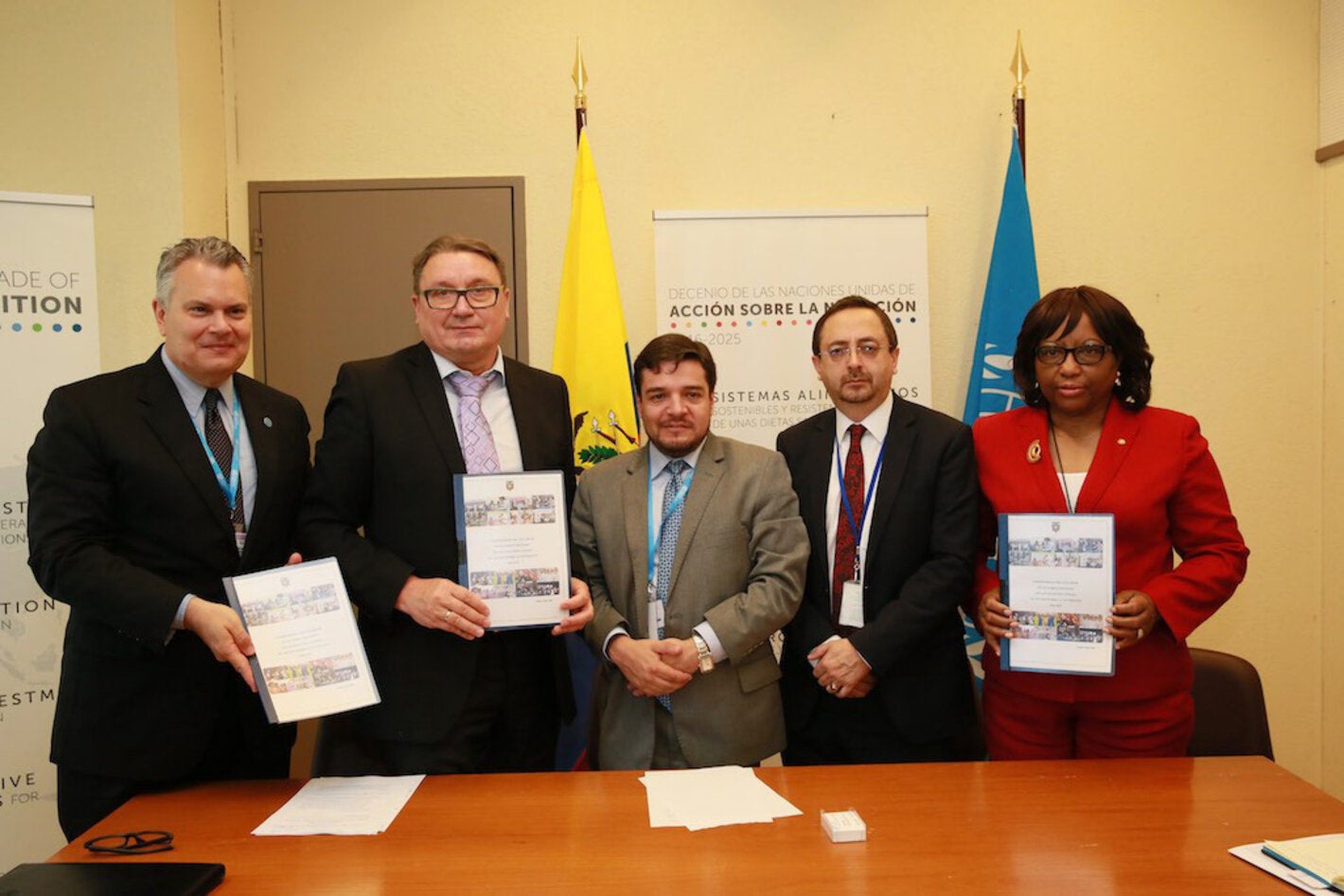 Geneva, 24 May 2017 (PAHO/WHO) - In a meeting at the World Health Assembly (WHA) today, the Ministry of Health of Ecuador announced its country's adoption of new and sweeping health commitments, in response to the call of the United Nations Decade of Action on Nutrition (2016-2025).

Ecuador's Vice-Minister of Health Dr. Fernando Cornejo announced the commitments in a meeting with PAHO Director Carisse Etienne and Dr. Oleg Chestnov, WHO's Assistant Director-General for Noncommunicable Diseases. Ecuador is adopting five ambitious "SMART" commitments (specific, measurable, achievable, relevant and time-bound), supported by 15 different policy measures, with the long-term aim of improving  and safeguarding the health and well-being of all Ecuadorians. Today's announcement makes Ecuador only the world's second country (after Brazil) to make specific commitments to the UN Decade of Action on Nutrition.

"Our commitments are already being implemented by the Ministry of Public Health of Ecuador and other public and private entities," Conejo said. "They put the population's right to health ahead of the economic and commercial interests of the large food industries. They also guarantee food sovereignty, defend the practice of exclusive breastfeeding at the first six months of life, improve and strengthen integral health care, and generate environments that advantage health."

"Ecuador is a country that believes in social inclusion, human rights and people's access not only to health services, but to the social determinants of health," said Etienne. "Ecuador is also very committed to ensuring that its people have good nutrition. In fact it was one of the first countries to pass legislation on food labeling in a very innovative manner. "

Ecuador's commitments, as announced today, are:

Cornejo mentioned a few of the efforts already being undertaken by Ecuador to improve the health of its communities and citizens - including the labeling of processed foods, taxing of sweetened beverages, and prohibiting the sale of products with high sugar, salt and fat content.

In April 2016, the UN General Assembly proclaimed 2016-2025 the Decade of Action on Nutrition. Led by WHO and the Food and Agriculture Organization of the United Nations (FAO), the Nutrition Decade is a framework for making commitments, tracking progress, and ensuring mutual accountability in line with these global nutrition targets: