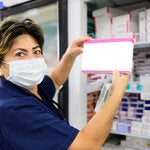 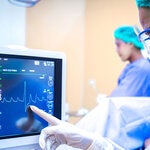 Countries in the Americas commit to continuing to collaborate in strengthening regulatory systems to ensure safe, effective and quality medicines 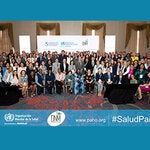 A government, through the regulatory authority for medicines, which can be constituted as a regulatory agency or a regulatory body for medicines, establishes and maintains the rules, laws, and policies required to ensure that medicines (including pharmaceutical products, vaccines, and other biologicals) are safe and effective, and fulfill the quality specifications offered by the producer. 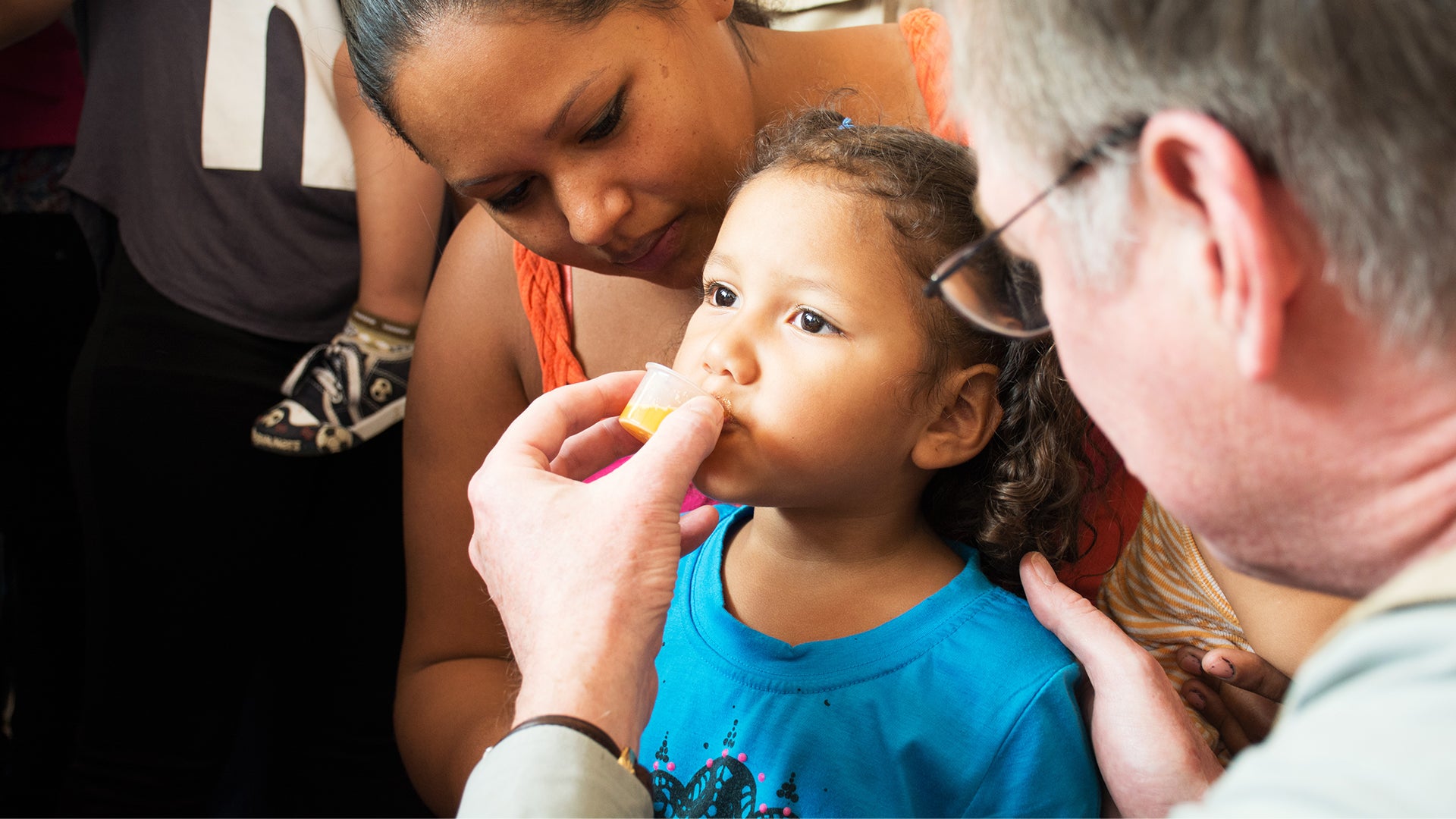 The main functions of the regulatory authority for medicines are:

PAHO has convened two conferences on drug regulatory harmonization in the Americas. These conferences have served as an open forum for representatives of the drug regulatory authorities, the pharmaceutical industry, consumer groups, academia, regional professional associations, and other interested groups from all regions of the Americas, which has facilitated communication and the exchange of information on this topic of common interest. As a result of these conferences, harmonization activities were recognized as important areas to be focused on to ensure that national authorities in the Region have access to state of the art information.

About the Quality and Regulation of Medicines and Health Technologies Project

The Official Medicines Control Laboratories (OMCL), in their status as entities assigned to the regulatory authorities, have been included in the PARF network since June 2005. At that time the Working Group on Good Laboratory Practice (WG/GLP) was created by the recommendation of the Fourth Conference. The LOCMs work in a network system under the coordination of the Working Group on Good Laboratory Practice. They agree to:

III. Study Guide on the Current Conditions of the Official Laboratories for Control of Medicines (LOCM) in Latin American and the Caribbean

IV. Self-Evaluation Guide on Good Practice for Official Laboratories for Control of Medicines

* Indicates documents available only in Spanish.

As a questionnaire, this guide makes it possible to perform a diagnostic study of the laboratories that should be incorporated into the Network and is also useful in countries that wish to construct an official medicines control laboratories (OMCL) for the first time.

The guide is available in three languages (Spanish, Portuguese, and English), and its use has permitted the incorporation of the 23 laboratories that currently make up the Network: download the document (pdf, 1.78 MB).

The guide is available in three languages (Spanish, Portuguese, and English):  pdfdownload the document (pdf, 2.06 MB)

The document is available in three languages (Spanish, Portuguese, and English):  pdfdownload the document (pdf, 2.23 MB)

Implementation of the Network:

Workshop for the Implementation of Control Charts in Vaccine Quality Control

Workshop for the Implementation of Control Charts in Vaccine Quality Control

The Workshop for the Implementation of SPC Explorer RT Software for the Management of Control Charts in Vaccines Quality Control Laboratories was held in Río de Janeiro, Brazil, 16 - 19 June, 2008. The general objective of the workshop was to implement the software SPC Explorer RT and to summarize the performance analysis of potency tests of standards.

The specific objectives were as follows:

More specifically, they were taught the analysis of vaccine quality control charts by using the statistical process control software, SPC Explorer RT. Moreover, the countries were then able to make potency testing graphs on location. Finally, every country took one license of the software to their laboratory and has the opportunity to familiarize itself with the broad applications of the software.

Historical Development of the RRLNCCV

This space has been designed with the main objective of keeping the information on the activities carried out by the Regional Network of National Vaccine Quality Control Laboratories (RRLNCCV). The agendas, minutes, photos, and presentations from the meetings and/or workshops held during the development of this Network can be found below.

System for Evaluation of the National Regulatory Authorities for Medicines

The process of evaluation and assessment of NRAs is based on verification of the indicators included in the data collection tool. This instrument is based on the recommendations of the World Health Organization for strengthening regulatory bodies.

The assessment of NRAs is based on the fulfillment of critical indicators (46% of the indicators in the data collection tool). Four levels of development have been established. Level 4 is the level that enables PAHO to designate the regulatory body as a reference authority for medicines and biologicals.

Designation of the regional reference NRA is the responsibility of the regulatory authorities that reach level 4 of the assessment table.

Level 4: National regulatory authority that is competent and efficient in the performance of the health regulation functions recommended by PAHO/WHO to guarantee the efficacy, safety, and quality of medicines. REGIONAL REFERENCE AUTHORITY.

Objectives and scope of a regional reference NRA

a) Participate in the quality assurance, safety, and efficacy processes for the products purchased by the Pan American Health Organization on behalf of the countries.

b) Collaborate as referents in the implementation and follow-up of recommendations approved by the PARF network.

d) Exchange public information through its Web sites and in the framework of the current national legislation on the products approved by the regional reference regulatory authorities. This will enable authorities with more limited capacities to have elements available for decision-making about their own products, considering that the products registered and sold in the countries with regional reference regulatory authorities will fulfill the quality standards recommended by WHO.

e) Establish mechanisms in agreement with the Pan American Health Organization that can favor the mutual recognition processes for the functions of the pharmaceutical regulatory bodies.

Convocation of experts in NRA

The experts will be resources of the system for evaluation of national reference regulatory authorities and the system for the prequalification of medicines. It is developed to:

Procedure for selection of experts

Results of the assessment

Level 4 National regulatory authority that is competent and efficient in the performance of the health regulation functions recommended by PAHO/WHO in order to guarantee the safety, efficacy, and quality of medicines. Regional reference authority.

Level 3 National regulatory authority that is competent and efficient, which shall improve the performance of certain health regulation functions recommended by PAHO/WHO in order to guarantee the safety, efficacy, and quality of medicines.

Level 2 Structures or organizations with the mandate of the national regulatory authority that fulfill certain health regulation functions recommended by PAHO/WHO in order to guarantee the safety, efficacy, and quality of medicines.

National Regulatory Systems for Medicines in The Americas. Evaluation and Pre-evaluation - CD50.R9 (January, 2018)

Presentation:Strengthening the National Regulatory Authorities (José Peña) (only in Spanish)

Results of the evaluation system

The Regional Network of National Laboratories for Quality Control of Vaccines was an initiative generated by the Regional System for Vaccines (SIREVA) in the Special Program for Vaccines and Immunization (SVI) of the Pan American Health Organization (PAHO). It is a strategy for the development, production, and control of vaccines in the countries of Latin America and the Caribbean in order to promote access to quality vaccines in the Region.

In 1993, in Washington D.C., one of the objectives established by SIREVA was to provide the Region with a framework of action for implementation of a system that assures the quality of vaccines. Consequently, the creation of a regional network for vaccine control was considered. This network would be made up of national control authorities and national control laboratories connected through a computer network. Its objectives would be as follows:

In 1994, the First Meeting on Organization and Operationalization of the Regional Network of National Laboratories for Quality Control of Vaccines (RRLNCCV) was held in Chile with the participation of representatives from Argentina, Brazil, Chile, Colombia, Cuba, Ecuador, Mexico, and Venezuela. At this meeting different agreements related to the objectives indicated by SIREVA were established. A network technical committee (NTC) made up of 5 countries was created with SIREVA acting as secretariat of the committee.

The technical committee of the RRLNCCV met for the first time in Mexico in 1995. It was made up of Brazil, Cuba, Chile, Mexico, and Venezuela, with SIREVA as secretariat. At this meeting the responsibilities of the NTC were established and the following were approved:

1. General statutes of the RRLNCCV;

2. Guide for standardization of vaccines and reagents of regional reference; and

From the time it was established up until 2008, Argentina, Brazil, Chile, Colombia, Cuba, Ecuador, Mexico, and Venezuela were active members of the Regional Network of National Laboratories for Quality Control of Vaccines (RRLNCCV). They performed many activities related to evaluation of the progress and difficulties of each collaborative study; establishment and distribution of regional standards; survey of information on the NRAs in the Region and their functions, as well as other activities.

Currently, the representatives of the Bolivarian Republic of Venezuela serve as coordinators of RRLNCCV activities.

The RRLNCCVs have changed some of their objectives, adapting them to the new realities. Some of the most recent results achieved by the work of this network have been:

Specific information from the agendas, pictures, minutes, and presentations made during the historical development can be found here.

As part of the activities to strengthen the national drug regulatory authorities (NRA), the Pan American Health Organization (PAHO), in conjunction with the World Health Organization (WHO), held this meeting in Buenos Aires, Argentina, from 1 to 3 December 2009. The main objective was to review regulatory aspects of the introduction of pandemic influenza A (H1N1) vaccines in the participating countries, in terms of: licensing, laboratory tests, and the monitoring of adverse events (in coordination with the Expanded Program on Immunization or the responsible officials of the respective Ministries of Health).

The meeting was attended by representatives of the NRA of Argentina, Brazil, Canada, Chile, Colombia, Cuba, the United States, Peru, Paraguay, and Uruguay.

All the information on this event can be found below:

II Workshop on Medicines Regulation in the Caribbean Countries

II Workshop on Medicines Regulation in the Caribbean, Barbados, September 8-9, 2009

-To establish priorities and to design strategies for strengthening and harmonizing the regulation of medicines in the Caribbean in the context of the essential public health functions,
-To share the outcomes of surveys related to the pharmaceutical situation and the assessment of national regulatory authorities in the Caribbean;
-To design and discuss mechanisms of communication and collaboration among regulatory authorities.
-To identify the possible common legal framework, guidelines and technical documents for strengthening essential regulatory functions;
-To discuss possibilities of strengthening the Human Resource capacity for regulation of medicines.

Regional Meeting on the Regulation of Biotechnological Products

The Pan American Health Organization, PAHO, through the Medicines and Health Technologies project, of the Area of Health Systems based on Primary Health Care (HSS/MT), hosted a meeting entitled "Regional meeting on regulation of biotechnological products - First meeting of the biological/biotechnological products PANDRH working group" in Punta Cana, Dominican Republic on 15 - 17 June 2010. A group of professionals representing Argentina, Barbados, Brazil, Canada, Chile, Colombia, Costa Rica, Cuba, Dominican Republic, Germany, Guatemala, Peru. Spain, Trinidad & Tobago, and the United States of America have participated, as well as representatives from the World Health Organization (WHO), and the PAHO.

All information generated by the BIO Working Group will be posted on the PANDRH website. It will include the working group mission, objectives, members, and recommendations, as well as other related documents.

(The following information is available only in Spanish)

Video: Twenty Years of PANDRH: A brief history of the regulatory network 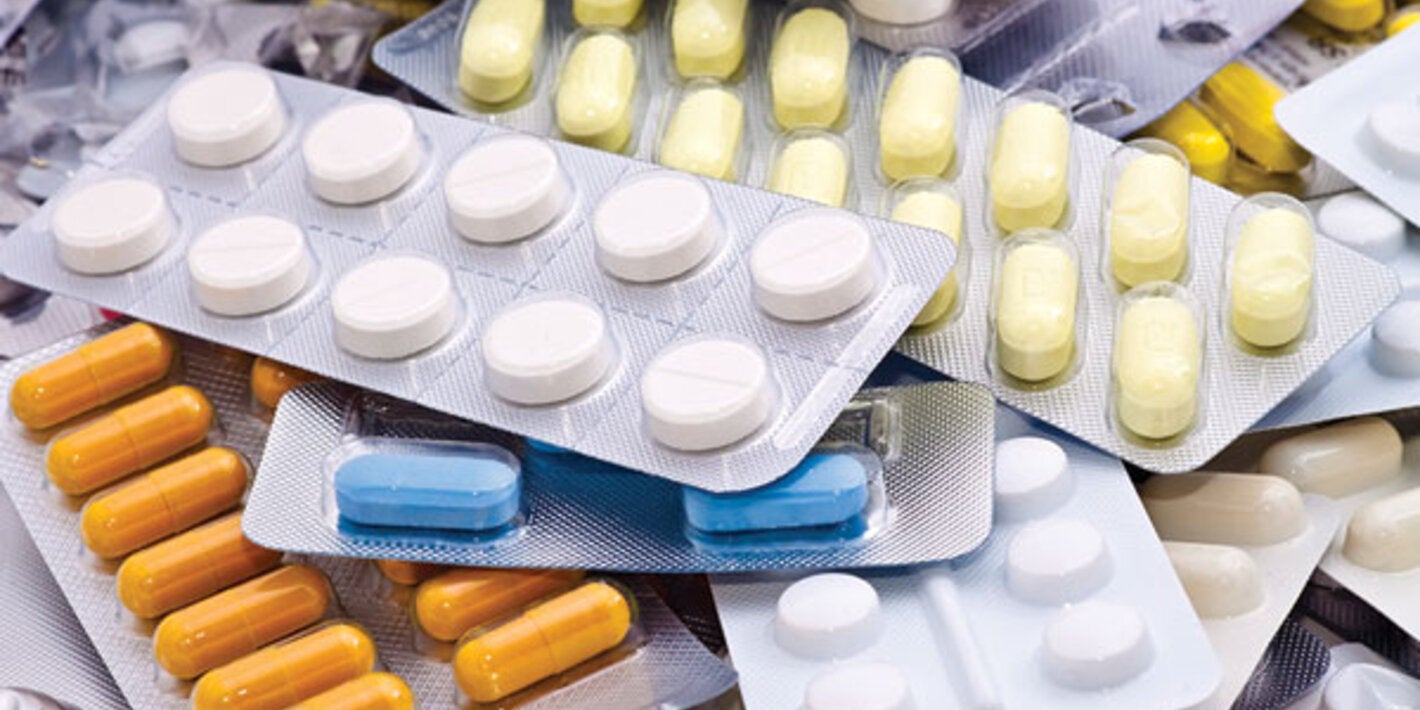 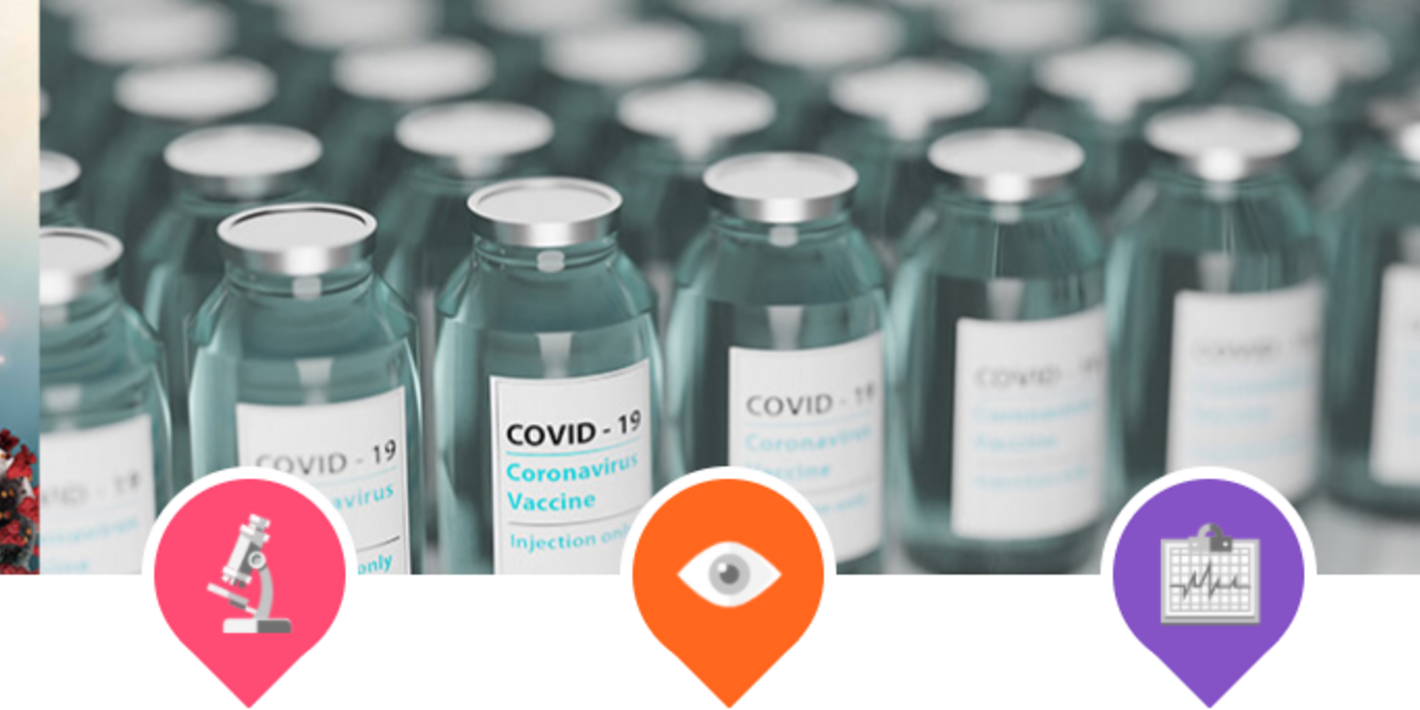 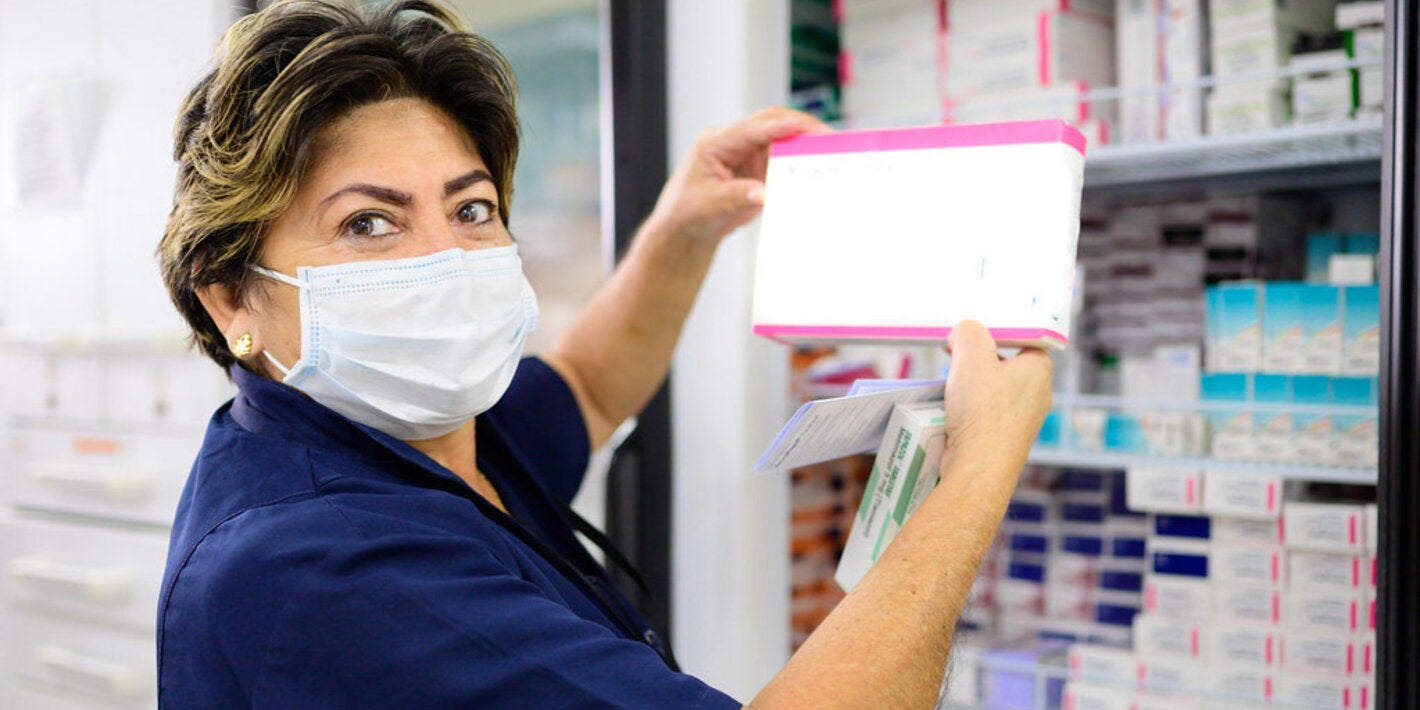 4 Feb 2022
WHO guidelines on good manufacturing practices for blood establishments, Annex 4, TRS No 961 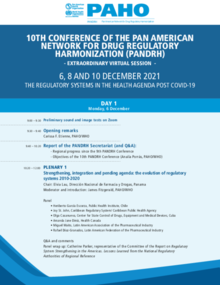 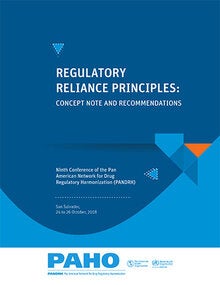 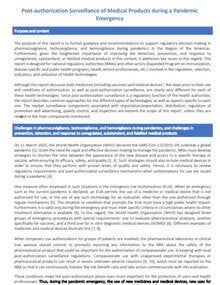 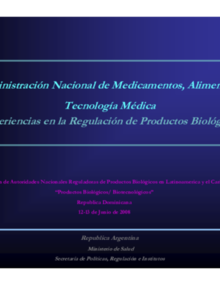 7 Oct 2016
CD55.R12 - Access and Rational Use of Strategic and High-cost Medicines and Other Health Technologies 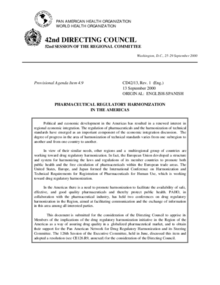 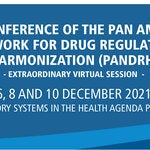 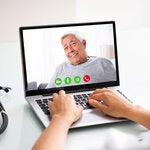 Strengthening consumer protection in the provision of health services (including e-health) in the wake of the COVID-19 pandemic.
12 Mar 2021
END_OF_DOCUMENT_TOKEN_TO_BE_REPLACED