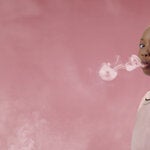 The Tobacco Control team works to help reduce the burden of disease, death, and economic consequences caused by tobacco use and exposure to second-hand smoke in the Americas Region. Tobacco is the single most preventable cause of death in the world today. As tobacco use continues to rise in many parts of the world, it becomes increasingly more important that governments work jointly with civil society to implement the mandates of the WHO Framework Convention on Tobacco Control to protect their citizens from tobacco and educate them about the dangers associated with its use.

The WHO Framework Convention on Tobacco Control (WHO FCTC) is the first international public health treaty negotiated under WHO auspices.

The WHO FCTC contains guidelines and requirements for the implementation of the most cost-effective tobacco control measures available necessary for reducing the smoking epidemic.

Key provisions that parties to the WHO FCTC will be required to implement include:

These measures can be considered the starting point for comprehensive implementation of the Convention.

The treaty also addresses a number of other issues, including the disclosure and regulation of ingredients in tobacco products, sale of tobacco products by or to minors, treatment for tobacco addiction, research and exchange of information among countries and promoting public awareness.

Download the full text of the treaty.
Official Site: http://www.who.int/fctc/en/

PAHO aims to accelerate the implementation of the FCTC in the Region, especially the articles that WHO considers “best buys” for NCD prevention and control. Strategic lines of action include:

In the Region of the Americas:

There are 142 million tobacco users

There are around 127 million smokers 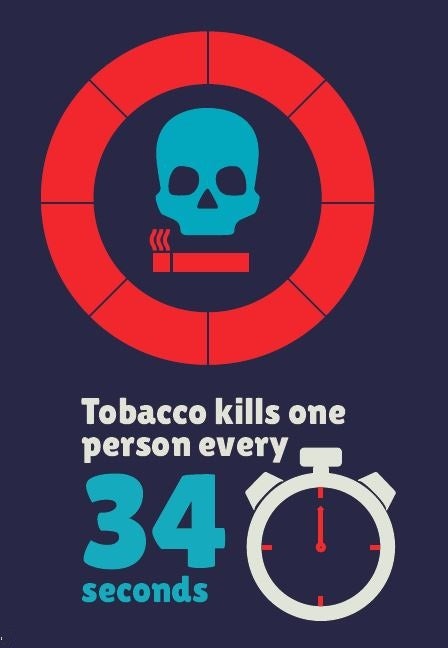 WHO: Tobacco prevention and control
Resources
Training Material on Regulation of Tobacco Products

The purpose of this training material is to provide technical support to governments of the Member States and public health organizations in developing regulation of tobacco product contents, design and emissions to reduce product attractiveness in accordance with Articles 9 and 10 of the WHO Framework Convention on Tobacco Control (WHO FCTC) and the Partial Guidelines for the implementation of Articles 9 and 10.

The material consist of a Facilitator's Guide, 7 PowerPoint presentations (with notes to guide the presentation), exercises to be used during the workshop and a final evaluation form. Additionally, two factsheets have been developed as complementary materials. There is also a module summarizing the information of the workshop that can be used to support individual training.

For individual training, access to the module on Tobacco Product Regulation to Reduce Attractiveness

The Parties of the WHO Framework Convention have committed themselves to protecting the health of their populations in a battle against the global tobacco epidemic.  In order to assist the countries fulfill their commitments under the Framework Convention, en 2008, the WHO established MPOWER,  a plan consisting of the six most important and effective tobacco control methods.

The six MPOWER strategies include:

These measures have demonstrated their effectiveness at reducing tobacco use.

In a report published at the end of 2009, the WHO reported that while some countries have advanced rapidly in the implementation of tobacco control measures, others are moving more slowly.  The report shows that in 2008 400 million people benefited from tobacco control policies.  Nonetheless, there remains much room for progress, as less than 10% of the world population is covered by any of the suggested tobacco control measures.

Surveillance is a systematic ongoing collection, collation, and analysis of data and the timely dissemination of information to those who need to know so that action can be taken.

Through surveillance, it is possible to monitor and evaluate regional tobacco-related issues.

The World Health Organization (WHO), the Centers for Disease Control and Prevention (CDC), and the Canadian Public Health Association (CPHA) began development of the Global Tobacco Surveillance System (GTSS) in 1999.   The purpose of the GTSS is to enhance the capacity of countries to design, implement, and evaluate their national comprehensive tobacco action plan and to monitor the key articles of the WHO Framework Convention on Tobacco Control (WHO-FCTC). The GTSS includes the collection of data through four surveys:

More on Surveillance and Tobacco Control

Environmental Nicotine Levels in the Americas

With the aim of supporting smoke-free environment policies and programs tor reducing the exposure to secondhand smoke in the Americas, the Pan American Health Organization (PAHO) and the Johns Hopkins University Institute for Global Tobacco Control developed a study to estimate exposure to secondhand smoke in Latin American countries and the Caribbean and designed a specific method for measuring secondhand tobacco smoke in public places.  The main results were published in the scientific paper  Secondhand Tobacco Smoke in Public Places in Latin America, 2002-2003.

Other results (in Spanish): 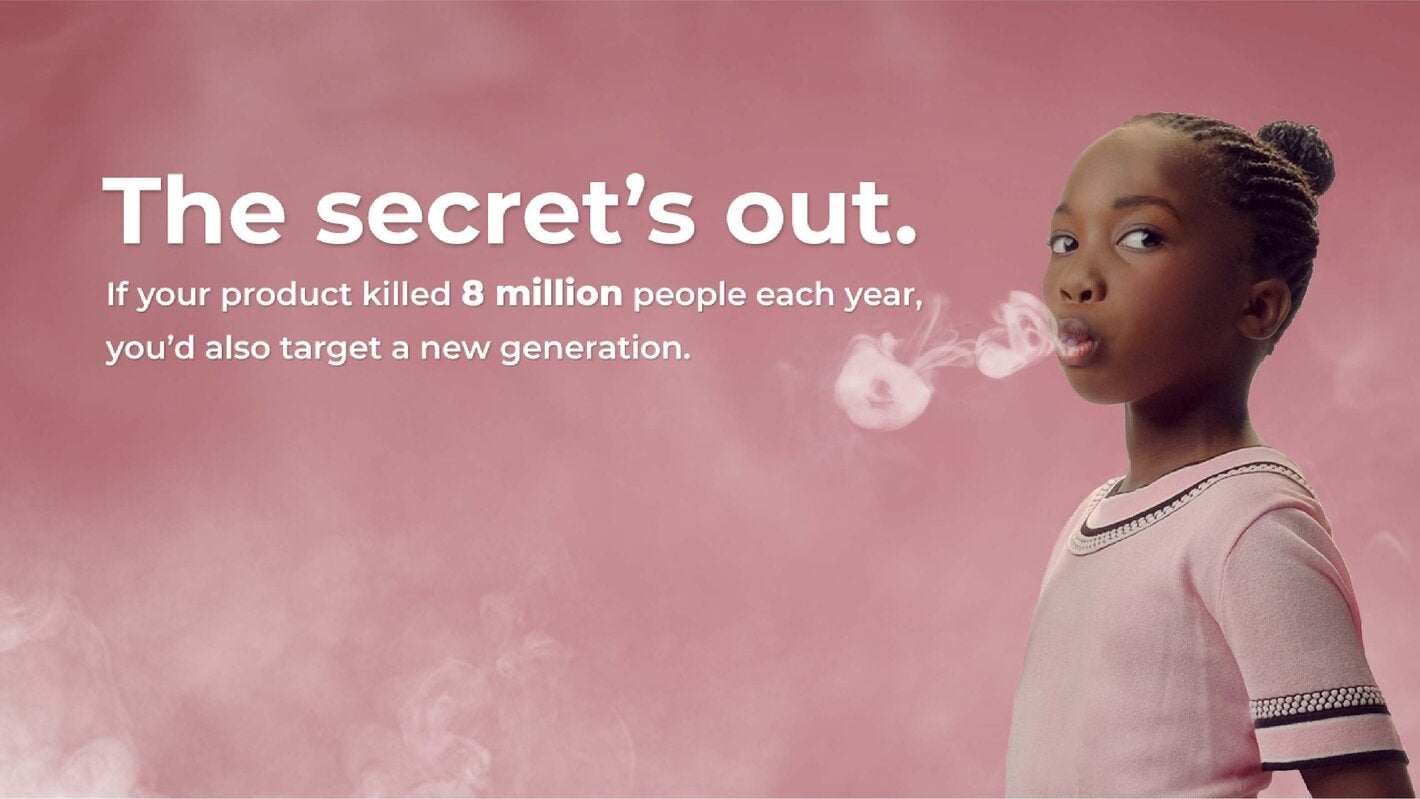 This World No Tobacco Day, WHO is launching a counter-marketing campaign in response to the tobacco and related industries’ systematic, aggressive and sustained tactics to hook a new generation of users.

The global campaign will debunk myths and expose devious tactics employed by these industries. It will provide young people with the knowledge required to easily detect industry manipulation and equip them with the tools to rebuff such tactics, thereby empowering young people to stand up against them.

Tobacco and Public Health: From Theory to Practice

This edition presents a re-structured version that takes in account the perspective of tobacco control in the wider context of prevention and control of the noncommunicable diseases (NCDs) as well as the current Regional Situation, after ten years of the entry into force of the WHO Framework Convention on Tobacco Control (FCTC).

The course is free and self-administered. It consists on 8 modules that can be taken independently. It is available in the PAHO´s Virtual Campus in Public Health.

The WHO e-Learning course is accessible to anyone free of charge. 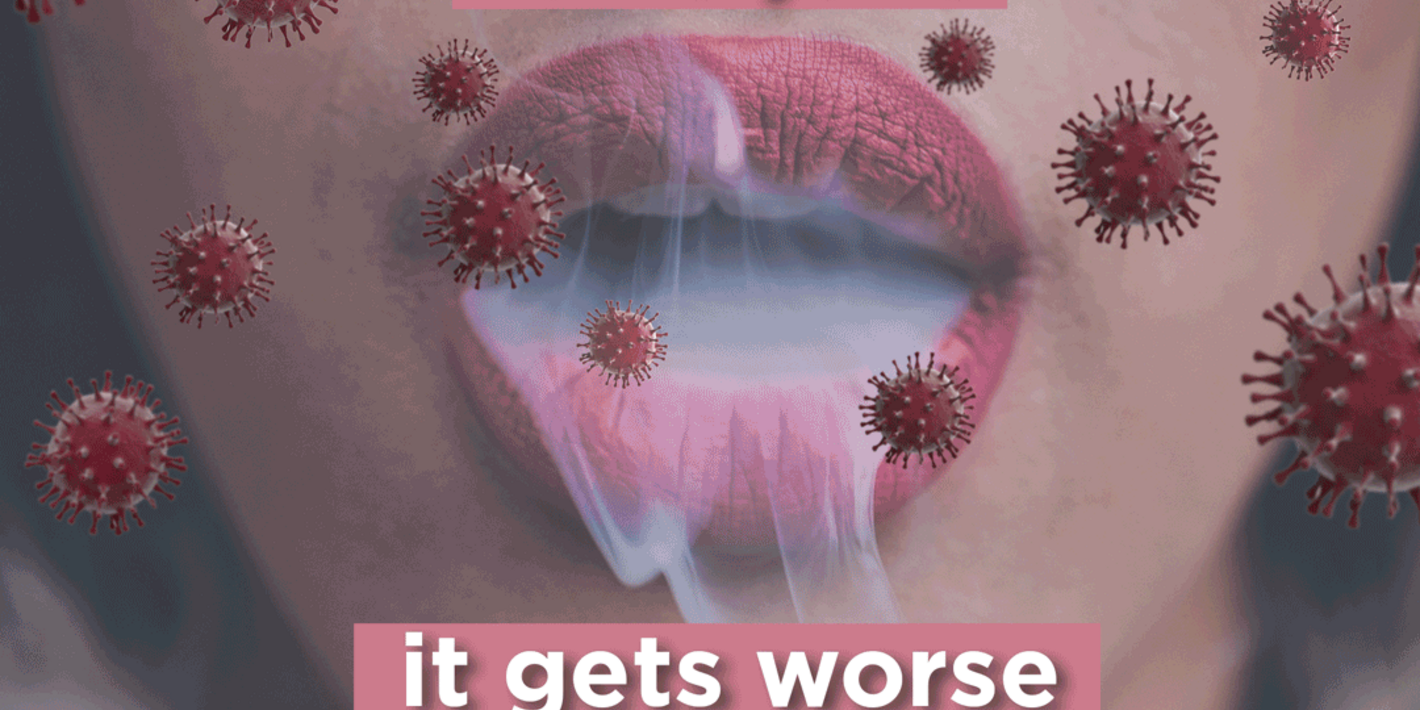 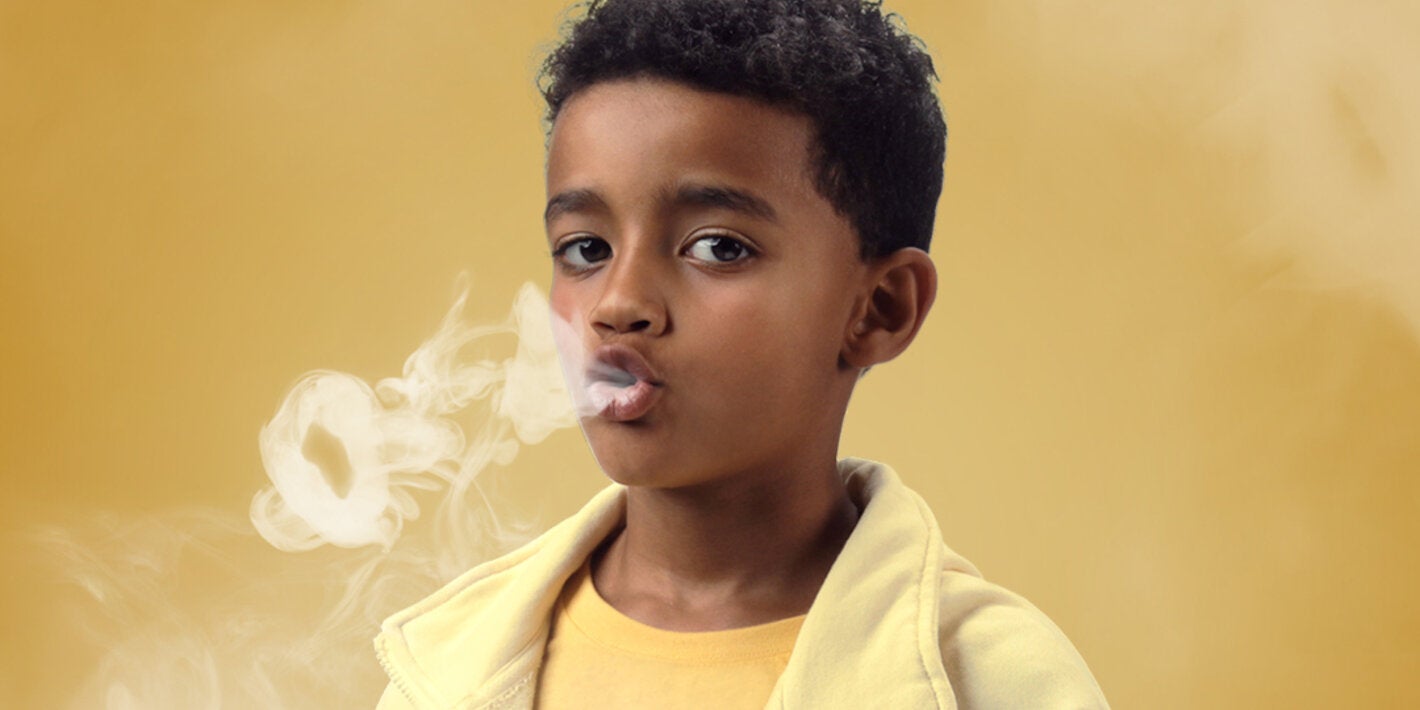 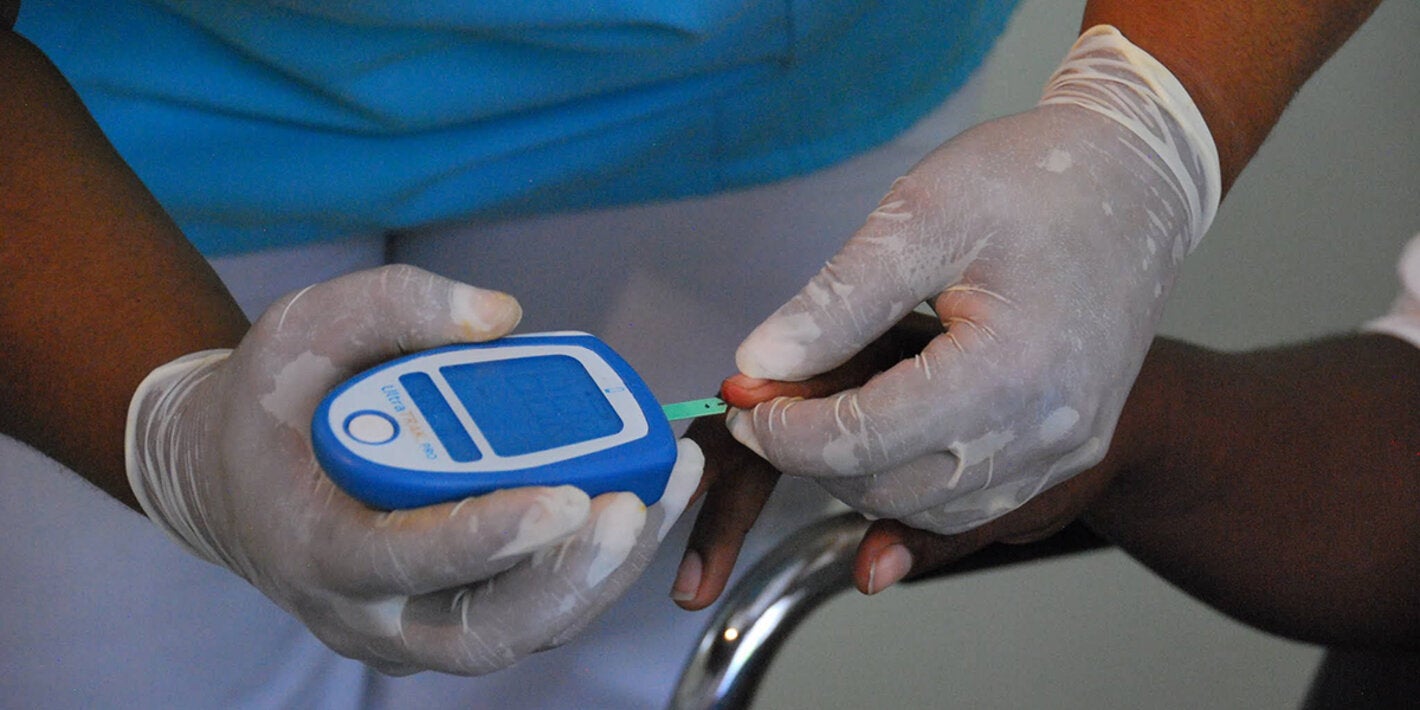 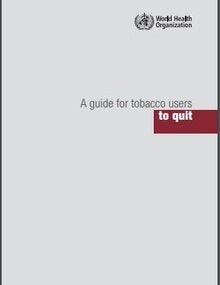 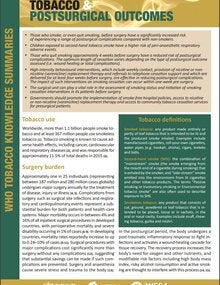 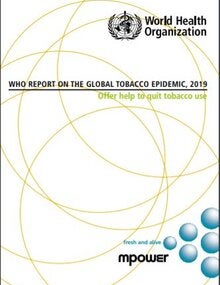 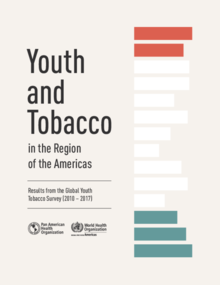 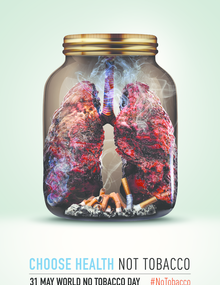 16 May 2019
Rollup: Don't let tobacco take your breath away. Choose health not tobacco 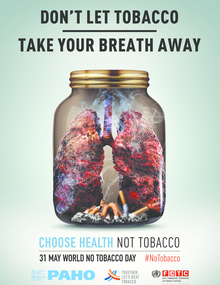 16 May 2019
Poster: Don't let tobacco take your breath away. Choose health not tobacco 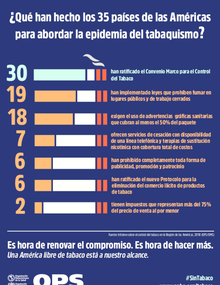 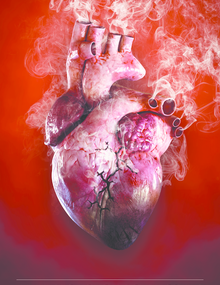 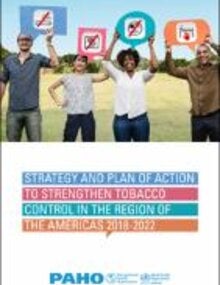