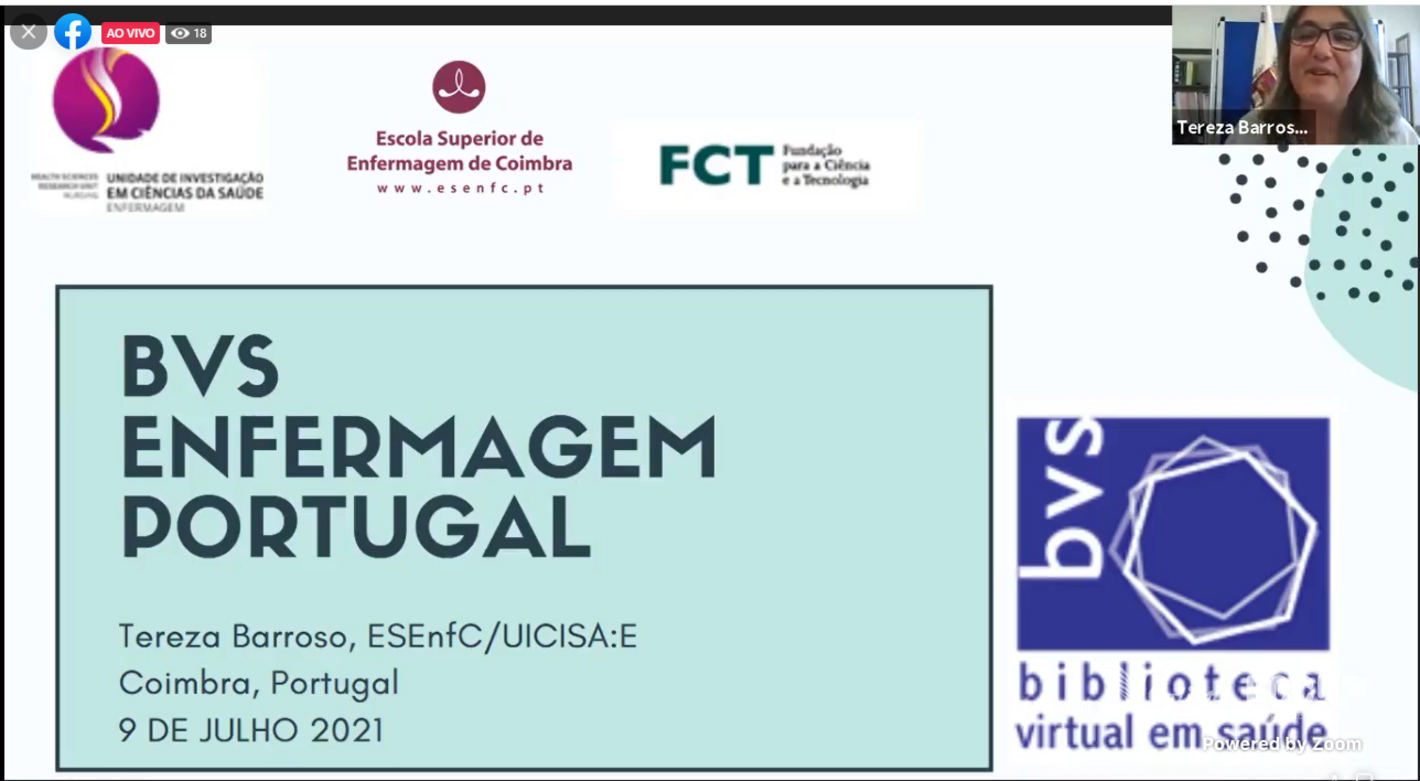 The launching of the Portugal Nursing Virtual Health Library (VHL), transmitted online from the Escola Superior de Enfermagem de Coimbra on July 9, was part of the International Meeting of Scientific Publishing, an initiative within the framework of the Strategic Axis of Development of the Research Unit in Health Sciences: Nursing (UCISA: E) for the Edition and Dissemination of Scientific Knowledge. Since its launch, Portugal has become the first country outside Latin America and the Caribbean to be part of the International VHL Nursing Network.

The opening of the event was presented by the coordinator of the Portugal Nursing VHL project Tereza Barroso, who said: “it is with great enthusiasm and joy that we see here the symbol of our Portugal flag on the website of the VHL Nursing. It’s been a long time since we started the contacts, conversations, meetings, some less formal, but it’s been a long road we’ve come to make this launch possible. We have developed an action plan to start this space with sustainability, since Portugal has many institutions and many publications.”

The Portugal Nursing VHL initiative will contribute to increasing the availability and visibility of scientific and technical publications in the area of nursing, in Portuguese. The action is based on the enthusiasm and leadership of the coordinator of the International VHL Nursing, Francisco Lana, Full Professor in the School of Nursing at the Universidade Federal de Minas Gerais, Tereza Barroso, Editor of the Revista de Enfermagem Referência and coordinator of the Portugal Nursing VHL project, and Manuel Rodrigues, coordinator of the Research Unit at the Escola Superior de Enfermagem de Coimbra.

The VHL now has its space with organized information sources and a network set up in this country. “We are very proud that Portugal is joining the International Nursing VHL Network, along with Argentina, Bolivia, Brazil, Colombia, Cuba, Mexico, and Uruguay. This is of great importance, because it is the first country outside the Americas region to integrate this project, and it is also a gateway to other Portuguese-speaking countries” said BIREME’s Director Diego González.

Also present at the opening session were João Apóstolo, Scientific Coordinator of UICISA:E, who highlighted his satisfaction at participating in this project and the importance of partnering with institutions for the systematization and access to information in nursing. In addition, Aida Cruz Mendes, president of ESEnfC, reiterated that the ESEnfC and the Research Unit are aligned with the national open science policy, and that they will do what is necessary to facilitate researchers and nursing professionals’ access to reliable sources of information and, with great pride, participate in the launch of the Portugal Nursing VHL. The Nursing VHL is a project that aims to contribute to the development of nursing in academic and supporting terms, promoting access to information products and services in the area, constituting a space for equitable access to knowledge in nursing for the dissemination of scientific and technical information, providing high availability and reliability of its sources of information.

The VHL is coordinated by the School of Nursing of the Universidade Federal de Minas Gerais and is composed of a network that integrates the main institutions producing scientific and technical information in nursing in Argentina, Bolivia, Brazil, Colombia, Cuba, Mexico, Uruguay, and now also Portugal.

With access rates exceeding 650,000 page views per year and an average of 150,000 users, the Nursing VHL is a reference in scientific information in the area, being the first search result on the Internet.

The event recording is available.