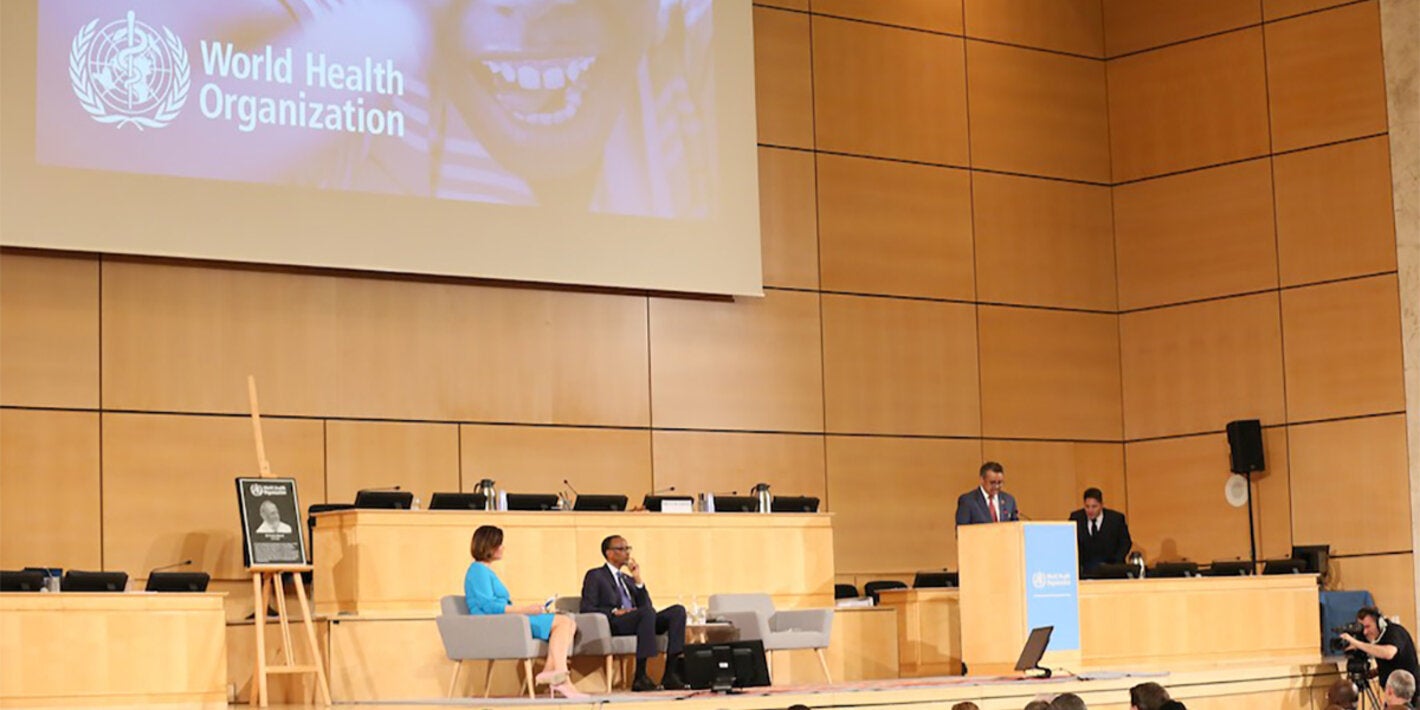 Geneva, 26 May 2017 (PAHO/WHO) - The decisions adopted today by the delegations at the World Health Assembly focused on implementation of the International Health Regulations, and on improving the prevention, diagnosis and treatment of sepsis. 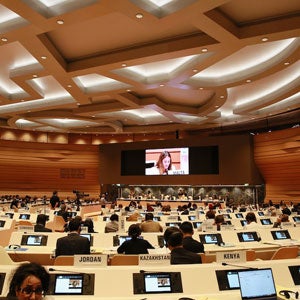 Delegates emphasized the urgent need to achieve full implementation of the International Health Regulations (IHR, 2005) - the international legal instrument designed to help the global community prevent and respond to public health risks that have the potential to cross borders and threaten people worldwide.

Delegates requested the Director-General to work with Member States to develop a five-year global strategic plan for IHR implementation and submit it to the World Health Assembly in 2018. The strategic plan is to be based on guiding principles that include consultation, the countries' taking ownership, leadership by WHO, broad partnerships, community involvement, regional integration, and results and accountability.

The strategic plan is to focus on using an intersectoral approach; integration with the health system; focus on fragile contexts; domestic financing for sustainability; balance between legally binding and voluntary elements; and an emphasis on monitoring.

Delegates also requested the Director-General to pursue and strengthen efforts to support Member States in full implementation of the Regulations, which includes building their core public health capacities.

Delegates also agreed on a resolution to improve the prevention, diagnosis and treatment of sepsis.

Sepsis occurs when a person has an infection and the body's reaction damages tissues and organs. Sepsis can emerge from infections caused by bacteria, viruses, fungi, and parasites. Bacterial infections are the most common triggers. Early recognition of sepsis is crucial for treating patients before the condition worsens and becomes fatal. Antimicrobial resistance makes it much more difficult to treat infections and prevent them from becoming sepsis. Antimicrobial resistance occurs when bacteria and other microbes change to resist the effects of antibiotics and other antimicrobial drugs. Most infections can be prevented by improving hygiene, increasing access to vaccines, and by other infection prevention measures.

The resolution urges governments to strengthen policies and processes related to sepsis, with particular attention to preventing infections and the further spread of antimicrobial resistance. It emphasizes the importance of reinforcing health worker training to recognize and effectively address the condition, calls for improved tracking and reporting of cases, and for promoting research to develop more tools for sepsis diagnosis and treatment.

Further, the resolution requests that WHO develop a report on sepsis and guidance for its prevention and management. In addition, the resolution directs the Organization to help countries develop the necessary infrastructure, laboratory capacity, strategies, and tools to reduce the burden of sepsis. It also asks WHO to work with partners to help developing countries gain access to quality, safe, efficacious, and affordable sepsis treatments and tools for infection prevention and control, including immunization.

Health and environment in the age of sustainable development 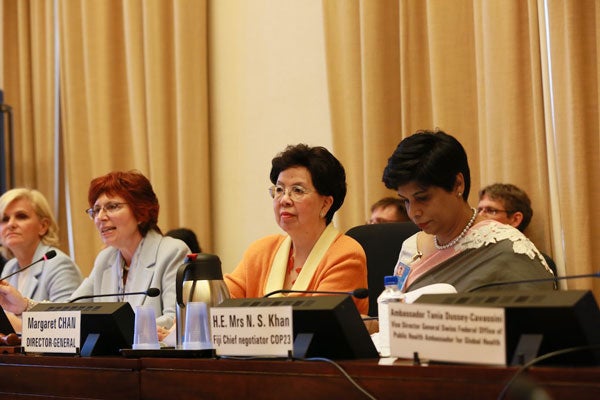 Health and the environment in the age of sustainable development was the subject of one of the technical sessions held by WHO as part of the World Assembly.

The Director-General of WHO, Margaret Chan, called for joining with other sectors to mitigate environmental effects on health. "We need to work with other partners to ensure that they have policies and do the right thing," she said. "The world is losing its capacity to maintain human health... What we can do as a global community is to strike the right balance," she explained.

Approximately 12.6 million deaths a year are due to preventable environmental health risks, which account for 23% of the global disease burden. This includes the large and growing burden of noncommunicable diseases caused, among other factors, by air pollution and unsustainable urbanization, as well as the burden associated with ongoing infectious disease risks related to water, sanitation, and vectors, in addition to the emerging risks created by climate change.

Recognition for the countries of the Americas

At a series of parallel events accompanying the 70th World Health Assembly, the countries of the Americas received specific recognition for various aspects of the work carried out by their medical teams.

Cuba's Minister of Public Health, Roberto Morales Ojeda, accepted the US$100,000 award and a recognition plaque on behalf of the Henry Reeve Brigade. The award recognizes the Brigade's work providing medical care in emergencies to over 3.5 million people in 21 countries affected by disasters and epidemics since its creation in September 2005.

"Much of the Brigade's work has been carried out with international cooperation from the Pan American Health Organization and World Health Organization, including work during the cholera outbreak in Haiti," said Minister of Health Morales. "This recognition is a great honor for Cuba, and for the Brigade, and it motivates us to continue our solidarity and assistance for all people facing emergencies or natural disasters," he said. Physician Félix Báez, a member of the Henry Reeve Brigade, accepted the award along with the Minister.

- More information on recognition for the countries of the Americas
- Video: Henry Reeve Brigade receives award 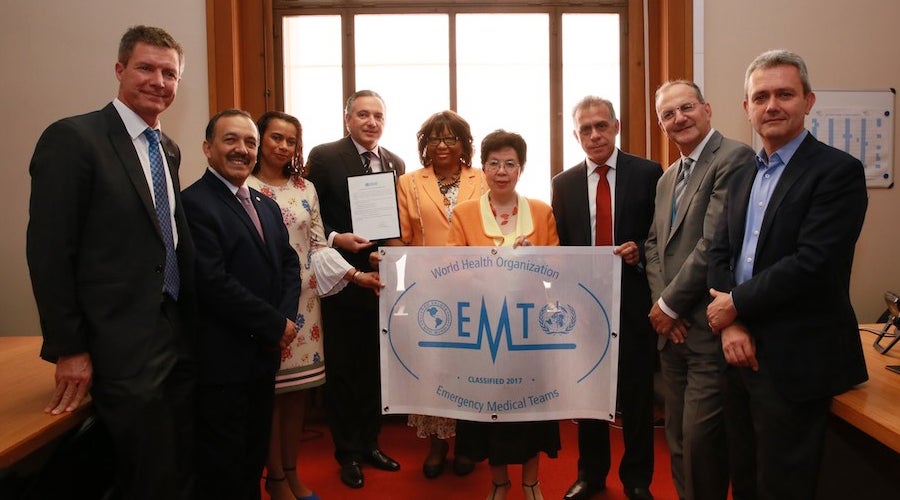 The medical emergency team of the Costa Rican Social Security Fund was the first such team in the Region of the Americas to be certified by the World Health Organization (WHO) as part of its Emergency Medical Team (EMT) initiative.

WHO Director-General Margaret Chan, along with the Director of the Pan American Health Organization (PAHO), Carissa F. Etienne, presented the certification today to Costa Rica's Minister of Health, Fernando Llorca, and to Daniel Quesada, Director of Emergencies of the Costa Rican Social Security Fund. The certification letter was presented as part of the activities of the 70th World Health Assembly.

Costa Rica's Minister of Health said that the certification was an honor for the country.Chan, in turn, said that the letter represented "very strong recognition of the country's capacity" for emergency response, one that she hoped would continue to be strengthened in Costa Rica, in the Region, and beyond. That, she said, is the purpose for which WHO was created: helping countries to respond to emergencies of any origin, whether disasters, epidemics, or other types of crisis.