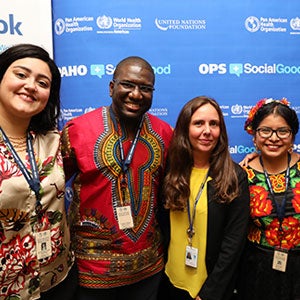 Ministers of health from the countries of the Americas committed to combat the barriers to health faced by indigenous, Afro-descendant and Roma peoples with the approval today of a new ethnicity and health policy.

Indigenous, Roma, Afro-descendant and members of other ethnic groups face greater challenges to their health, resulting in higher rates of mortality and morbidity than the general population

Washington, DC, September 26, 2017 (PAHO/WHO)- Ministers of health from the countries of the Americas committed to combat the barriers to health faced by indigenous, Afro-descendant and Roma peoples with the approval today of a new ethnicity and health policy.

Poor health outcomes among different ethnic groups are common in the Americas. Maternal and infant mortality is consistently higher among indigenous and Afro-descendant groups. In some countries, HIV infection rates are more than nine times higher among Afro-descendants than Caucasians, and malnutrition among indigenous children is higher than among the general population. These populations also tend to have higher rates of violence against women and suicide, says the new policy.

The health disparities faced by different ethnic groups are the result of various barriers to health services, including geographical, financial and cultural.

"Public health professionals and health care providers need to consider the link between ethnicity and health at every step of the way," said Andres de Francisco, Director of the Family, Gender and Life Course Department of the Pan American Health Organization (PAHO), Regional Office for the Americas of the World Health Organization (WHO). "The invisibility and discrimination often experienced by these populations heighten their conditions of vulnerability. Using an intercultural approach will help eliminate those barriers that prevent members of ethnic groups from attaining the highest level of health."

Additionally, most health information systems in the Americas are not adequately disaggregating data by ethnicity, making it impossible to have the full picture on the health situation of all ethnic groups.

During the development of the policy, PAHO worked closely with the Region's different ethnic leaders, including youth, to ensure the policy reflected their world visions and would best meet their needs.

"Being able to hear directly from the groups that have traditionally been excluded from health services was invaluable to developing this policy," said Sandra del Pino, PAHO Regional Advisor for Cultural Diversity. "It will be crucial to continue these conversations as countries move forward to implement it."

The Pan American Sanitary Conference brings together ministers of health and other high-level delegates from through the Americas to set hemispheric health priorities and to define collective action to address them.