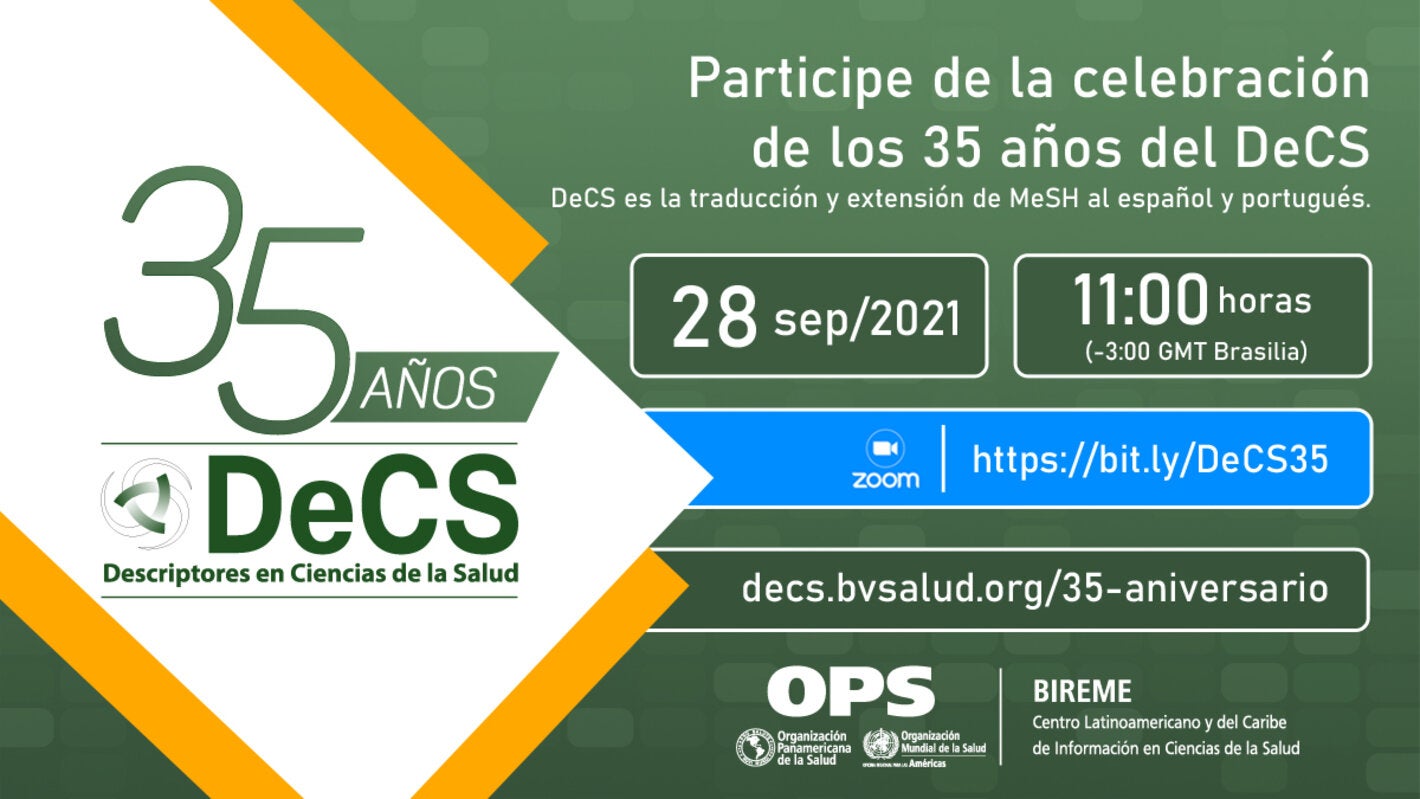 The 35 years of the Health Sciences Descriptors – DeCS were celebrated in an online event promoted by BIREME/PAHO/WHO. The celebration had the simultaneous participation of more than 300 people from several countries of the region and some of the actors who contributed with BIREME to write the successful history of DeCS, with the support of PAHO and alliances with institutions in Brazil, Chile, Spain, the United States, and France. DeCS is the main controlled vocabulary for indexing and retrieving published scientific and technical literature on health in the Latin American and Caribbean region. It is an extended translation of MeSH – Medical Subject Headings – of the National Library of Medicine of the United States (NLM), which is updated annually by a network formed by four health institutions coordinated by BIREME.

The event was mediated by the BIREME Director, Diego González, and the opening remarks were made by Jarbas Barbosa da Silva Jr., Deputy Director of the PAHO/WHO. At the opening ceremony, Jarbas greeted all BIREME collaborators and event participants, librarians, indexers, Cooperating Centers of the Virtual Health Library (BVS) and Latin American and Caribbean Literature in Health Sciences (LILACS), professionals of health and related areas, as well as the professionals and institutions that collaborate with DeCS. Jarbas affirmed, “it is a great honor to welcome you to this important event that will allow us to know much more about the history and current affairs of this wonderful tool that keeps the terminology in health organized hierarchically”.

Then, the 35-year trajectory of DeCS was presented over 35 minutes, through presentations by Arthur Treuherz, Supervisor of Terminology and Classification in Health, and Ana Cristina Espíndola Campos, Information Analyst, both from BIREME. Arthur spoke about the origin of DeCS, which dates back to the late 70’s, when BIREME started to collaborate with NLM in the translation and adaptation of the MeSH vocabulary into Spanish and Portuguese. Arthur also highlighted that “since 2016, MeSH in French has been added to DeCS, thanks to translations of this vocabulary by INSERM (Institut National de la Santé et de la Recherche Médicale) and the DeCS exclusive category descriptors through the Department of Medical Informatics at the Centre Hospitalier Universitaire, Université de Rouen.

Ana Cristina Espíndola Campos, in turn, highlighted the technical and current aspects of the vocabulary, starting with the DeCS expansion methodology developed by BIREME and applied to cover the transversal themes of PAHO. Ana highlighted the current revision of the DeCS Public Health category, which is in the public consultation stage, in addition to emphasizing the contribution of DeCS users in maintaining the quality and breadth of DeCS: “Through the communication channels, we were able to identify the users’ needs, resolve their doubts, and give them space to exercise their right to express themselves”. She concluded by thanking “users who suggest terms, point out spelling errors, conceptual errors and motivate us to do work directed at the regional reality”.

Amanda Wilson of NLM said that DeCS’s 35th anniversary “is a wonderful achievement. As you know, MeSH is very important to the NLM, it is part of the foundation of primary indexing, for its work with human indexing as well as automated indexing. MeSH is also an important tool for users because of its great benefits in vocabulary control. And from the DeCS history we just heard, it’s clear how DeCS helped amplify the benefits for its users.” 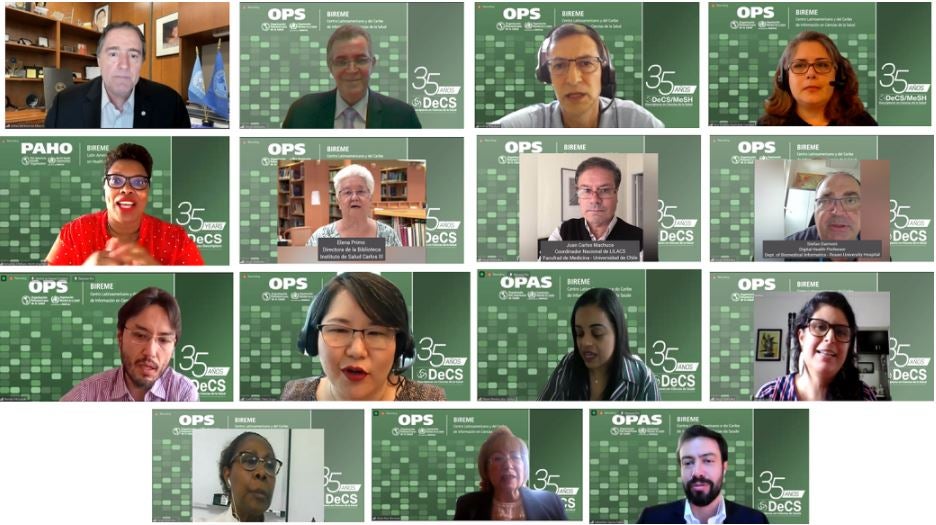 A video was then presented with greetings from Elena Primo, Director of the Library of the Instituto de Salud Carlos III, Spain; Juan Carlos Machuca, National Coordinator of LILACS, Facultad de Medicina de la Universidad de Chile, Chile; and Stefan Darmoni, Professor, Department of Biomedical Informatics, Centre Hospitalier Universitaire, Université de Rouen, France. Elena stated that the DeCS is an “invaluable instrument for its collaboration in the recovery of scientific literature in Spanish”. Juan greeted the entire “team of professionals who make it possible for this very indispensable tool to be available”. Darmoni stated that he shares the same “passion and enthusiasm for MeSH” and that “we are actively participating in the French translation of the DeCS descriptors”.

DeCS products and services were presented at the event by Renato Murasaki, Manager of Methodologies and Information Technologies at BIREME. Renato stated that it is “a great honor to have received this challenge, this privilege, the opportunity to have the area of ​​terminology in Health Sciences as the area that I manage. I want to praise and acknowledge the dedication, professionalism and passion of everyone who collaborated in this construction and who continue to maintain and expand the use and impact of this thesaurus that translates and expands MeSH”.

Next, Sueli Suga, Supervisor of Referential Information Sources at BIREME stated that “talking about DeCS, as coordinator of LILACS, and as a librarian, is a privilege, as it is one of the components of the LILACS methodology and is also recognized in the field of librarianship as one of the best specialized thesauruses in existence”. Present at the celebration, the Regional Consultant on Knowledge Management and Networks of PAHO/WHO, Eliane Pereira dos Santos, highlighted the multilingualism of DeCS as something “very important. Having methodologies, technologies, and tools in more than one language only strengthens this ability to not only bring information, but to organize the entire context, which for the region is fundamental and part of our strategy”. Composing the celebration round table, Shirlei Rodrigues, General Coordinator for Documentation and Information stated that “here in Brazil, DeCS is a reference for academia, for research in the area of ​​healthcare and for the creation of policies for the Unified Health System, evidence-based”. Luciana Danielli de Araujo, librarian at the Institute of Scientific and Technological Communication and Information in Health (ICICT/Fiocruz), highlighted “how innovative this work is in building a controlled vocabulary that represents knowledge and organizes the field of public health for Latin America and the Caribbean.” Luciana also stated that, “without DeCS, we cannot do concept mapping, terminology construction, much less the representation of a field”.

Alicia Ríos Terrones, Library Chief of Staff of the Information Management Office of the Ministry of Health of Peru spoke about the importance of DeCS in the development of different products that are being coordinated by the Ministry of Health of Peru and highlighted that “the DeCS thesaurus constitutes a valuable support tool, with a successful trajectory, good positioning, and high professionalism in its management and updating. It has notably contributed to the organization, recording of information, identification, and agile retrieval of topics of interest within the framework of knowledge and information management”.

Sebastián Garcia Saisó, Director of the Department of Evidence and Intelligence for Action in Health, EIH/PAHO/WHO, was in charge of closing: “I want to emphasize that these 35 years have led us to have a very robust presence not only at the regional level, at the level of the Americas, but also at the global level”. Sebastián stated that the COVID-19 pandemic “makes us need more and more access, we need to better incorporate everything that implies evidence and knowledge for decision making, in particular, those related to health and people’s lives. He concluded by thanking BIREME “for the work and ongoing commitment that led us to these first 35 years”, highlighting the work of Diego González, along with Renato Murasaki and his team over the past few years.

Antigua and Barbuda receive 19,200 of vaccines donated by Spain through COVAX
22 Nov 2021 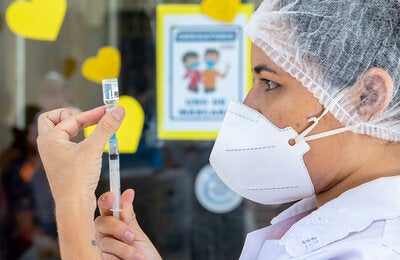 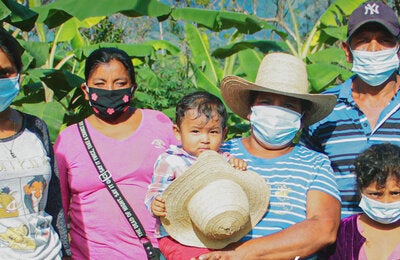 New UN report: Hunger in Latin America and the Caribbean rose by 13.8 million people in just one year
30 Nov 2021
END_OF_DOCUMENT_TOKEN_TO_BE_REPLACED