Q&A with PAHO Chief of Immunization for World Polio Day 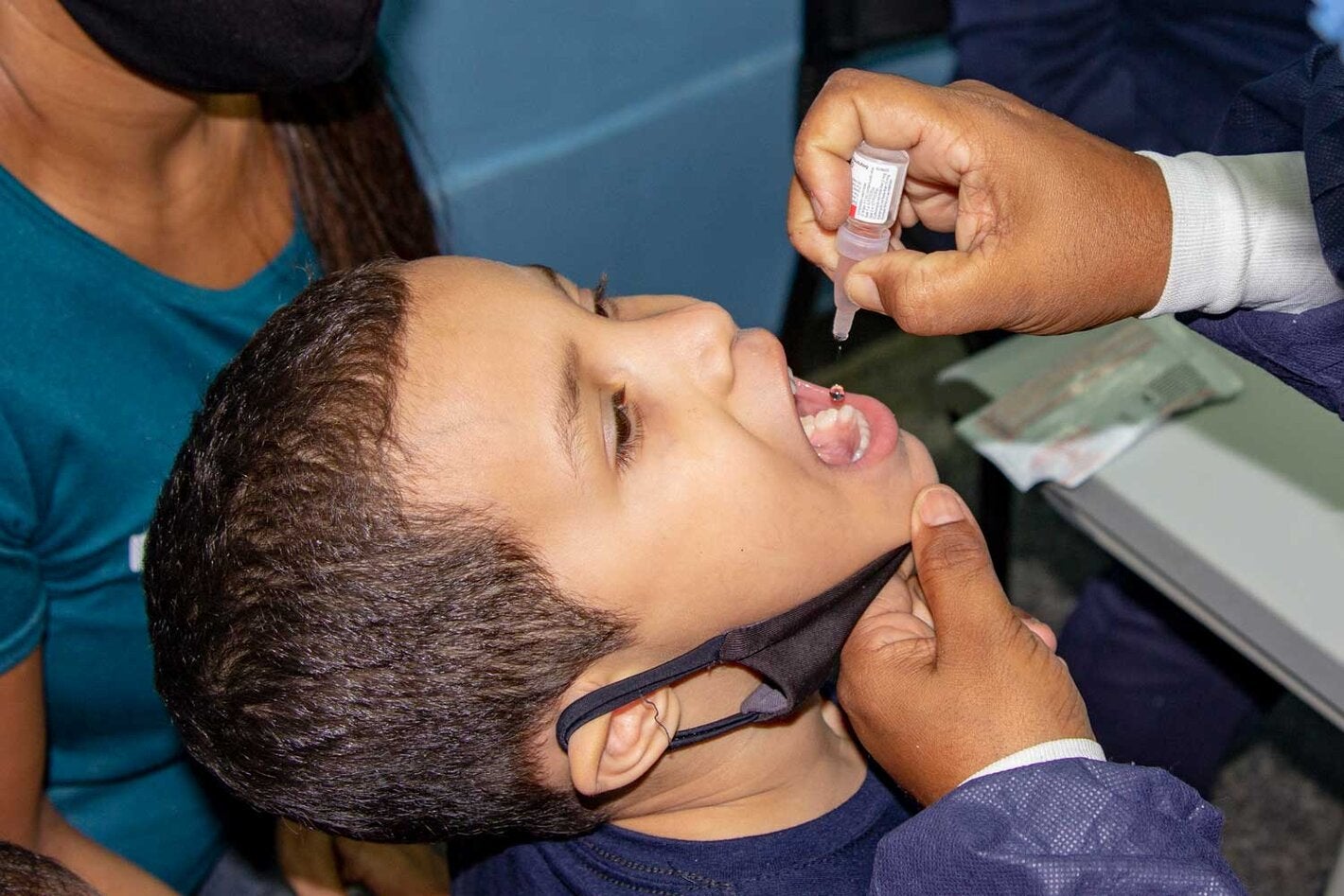 Washington, DC, 24 October 2022 (PAHO)- In 1994, the Region of the Americas was the first in the world to be certified polio-free by the World Health Organization (WHO), a milestone achieved after concerted effort by countries with the support of the Pan American Health Organization (PAHO).  But vaccination rates in children with all three doses of the polio vaccine stood at 79% in 2021, putting the region at risk of the reintroduction of the disease.

Recently an unvaccinated 20-year-old man in the United States, who presented with paralysis, was diagnosed with vaccine-derived poliovirus (VDPV), a strain related to the weakened poliovirus contained in the oral polio vaccine (OPV). On rare occasions, when replicating in the gastrointestinal tract, the strain may spread in communities that are not fully vaccinated against polio.

For World Polio Day, we spoke with Dr Daniel Salas, Chief of Immunization at PAHO, about the situation and what the recent reported case implies for the Americas.

1. The region of the Americas was declared polio-free in 1994 – why are we seeing new cases?

Although our region was certified polio-free in 1994, the more correct terminology is that we eliminated the transmission of wild poliovirus in the Americas. The disease persists in some countries, mainly in Afghanistan and Pakistan, where there is an active wild poliovirus type 1 transmission. This is the wild type, which is the virus in its natural form.

There was one new polio case in our region recently due to a mutation strain derived from the oral polio vaccine, which can regain its strength to gain the ability to circulate in the environment, most commonly in wastewater. This is what we call a “vaccine-derived polio virus” (VDPV) which is very unusual. This was the cause of the paralysis in the recent polio case in the Americas, which was reported earlier this year in the State of New York in the United States. The case illustrates why we need to strengthen the capacity of countries to detect every probable case in a timely manner.  It’s important to identify and stop the virus from spreading so that we don't have a polio outbreak. The only protection against polio is vaccination.

2. Should the rest of the Region of the Americas be worried?

Yes, the risk of polio reintroduction is real. We are concerned because millions of children are unvaccinated, and other millions are under-vaccinated, and that opens up an opportunity for the virus. This ‘pocket’ of unvaccinated children has been growing in the past few years, and especially during the pandemic, when the coverage of polio vaccination decreased even further. We now have a regional coverage of polio of 79% when we should have 95% or more to avoid outbreaks. This means that we have a lot of children that are susceptible and could be infected with polio. At the same time, the surveillance systems have declined in quality, and this jeopardizes the timely detection of cases. As we know, polio causes permanent muscular paralysis, it is irreversible, but with a complete vaccination schedule, we can prevent it.

3. As the polio strain found in wastewater was a poliovirus derived from a vaccine (VDPV) does this mean the vaccines are unsafe?

No, vaccines are very safe and effective, this was a very rare transmission. The case in New York State earlier this year involved an unvaccinated individual who caught polio from VDVP circulating in wastewater. This is very rare, and the individual was vulnerable because he was unvaccinated.

4. What is the difference between oral and injectable polio vaccines?

The oral vaccine includes a version of the virus that is very weak, that usually does not cause the disease on the people on whom it is applied on. It confers a protection to the gut, which means that, if that child is exposed, the virus is not going to progress or multiply in the gastrointestinal system. Only one case in 7.6 million of doses administrated with this kind of vaccine can progress to polio. But this is very unlikely and does not mean it is transmissible. From a public health perspective, the oral vaccine increases herd immunity.

The injected vaccine generates a good antibody response, but it does not produce gastrointestinal protection. So, if you have communities with pockets of unvaccinated children and the poliovirus infected a child who has been vaccinated with the injected vaccine, the child will be protected against paralysis, but the virus can still replicate in his or her gastrointestinal system and potentially spread through stools and wastewater, and in that way infect others. So, these are the advantages and disadvantages of the two vaccines available against polio.

5. What is PAHO doing following the recent re-emergence of polio?

We are working to strengthen the immunization programs in the Americas, and not just for polio, to increase coverage to reach our goal of 95%. We have set up a prioritization system, with some countries at very high-risk of having polio re-emergence or outbreaks. We are placing emphasis on strengthening capacities for surveillance and in increasing vaccination coverage. We are aware that some of the financing for immunization programs have decreased during the COVID-19 pandemic and are making a call to action to increase the public funding for vaccination because the health of our children is everyone’s responsibility.

6. Can a person who has polio be cured?

There is no cure for polio, once you have the paralysis there is no way to regenerate the nerves that enable you to walk or regain motor function. Polio is an irreversible disease, but we can prevent it by making sure we are all vaccinated.

7. What is the treatment for polio?

There are possibilities of offering physical therapy to regain some of the functions of the affected muscle, but it is not possible to have a complete reversion. In some cases, the paralysis is so aggressive that it can paralyse respiratory muscles and the person can die as they cannot breathe. So, it’s not just the possibility of being in a wheelchair that we are trying to prevent – some people die of polio due to respiratory difficulties.

8. What is the age limit to receive the vaccination?

In general, the priority is vaccinating children under 6, however, if there are children who have not received the complete vaccination schedule, the program can extend vaccination until 10 or 15 years of age. It also depends on the resources available in different countries.