Dominica launches HEARTS in the Americas 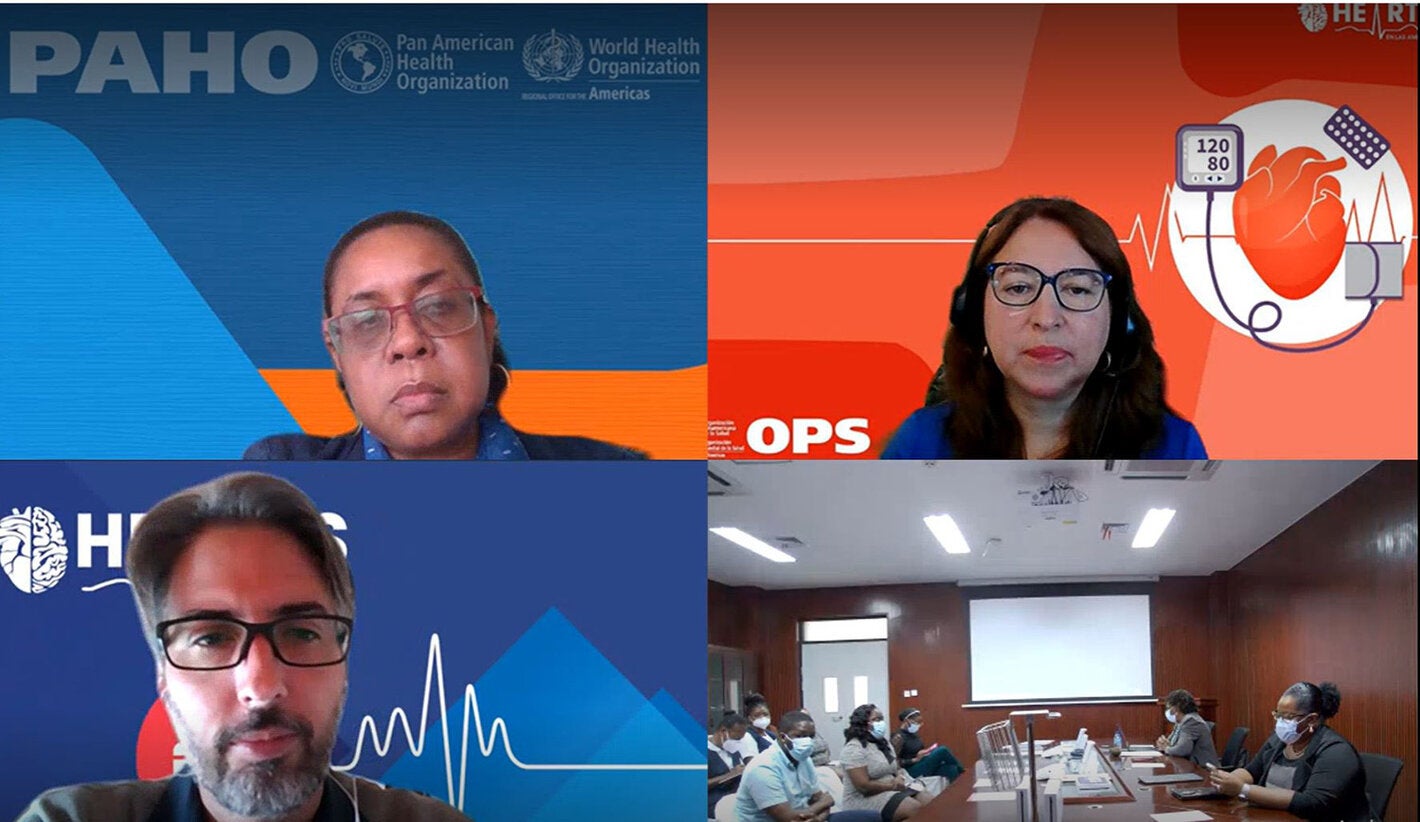 Roseau, Dominica, 13 May (PAHO/WHO) - During the next few months, Dominicans will progressively note a change in the care they receive at the seven main health centres on the island.

On Wednesday May 13th, 2022, the excited and enthusiastic technical and administrative team at the primary health care level, led by the Acting Minister of Health, Honorable Kent Edwards, the Permanent Secretary, Ms. Letitia Lestrade Wyke and the Acting Chief Medical Officer, Dr Laura Esprit, convened to launch the HEARTS in the Americas Initiative.  This launched was convened in collaboration with the Pan American Health Organization/World Health Organization (PAHO/WHO).  Support was provided through the European Commission/African, Caribbean and Pacific Countries (EU/ACP) Grant: Health Systems Strengthening for Universal Health.

The HEARTS in the Americas is an initiative of countries, led by the Ministries of Health with the participation of local stakeholders and the technical cooperation of PAHO/WHO.  Other countries implementing the programme have seen similar successes, including Barbados and Cuba. As part of the pilot project in Barbados, eighteen months after implementation, high blood pressure control rates improved by 14.5%. Cuba also noted increases in control rates from 36% to 59% in the population cohort surveyed, having implemented the programme in 2016.  One of the noted reasons for Cuba’s success was the update of its formulary of antihypertensive drugs to include those that are long acting and available in fixed combinations.

During the launch, the Technical Focal Point for the HEARTS Initiative in Dominica, Dr Lynora Fervier Drigo, presented the standardized treatment protocol to which physicians in primary health care will be closely adhering.  These consist primarily of long acting and fixed-dose combinations of antihypertensives, currently available in the public sector in Dominica. Dr Drigo indicated that these protocols will also be available to the private sector.

Cardiovascular disease (a disease that affects the heart and blood vessels) accounts for 37% of all deaths from Non-Communicable Diseases.  Uncontrolled hypertension is the highest risk factor for cardiovascular disease worldwide. The Acting Minister of Health, Honorable Kent Edwards, noted that in the last population survey in Dominica (STEPS 2008), it was revealed that approximately one in three (32%) persons in the population had raised blood pressure.  In order to meet the Sustainable Development Goals (SDGs), the number of persons in Dominica with raised blood pressure will need to be reduced to one in four persons (25%) by 2030.  He observed that Dominica is on its way to achieving the SDGs by implementing the HEARTS in the Americas Initiative.

The Minister also cautioned that the Initiative is not only about taking drugs and medications.  He reiterated that Dominicans have a role to play in promoting and adhering to a healthy lifestyle, an important module of the HEARTS Initiative. He emphasized the role of certain stressors supporting the elevation of blood pressures.  These include eating unhealthy foods, smoking and drinking too much alcohol. It is important that Dominicans reduce these stressors by becoming more resilient.  Exercise as much as possible.  This can include brisk walking for 30 minutes at least five days a week. Eat healthy by consuming adequate amounts of fruits and vegetables and less unhealthy foods including trans fats and unsaturated fats. Drink less alcohol and stop smoking.

The Ministry of Health team thanked PAHO and the other stakeholders for the support provided to be able to implement the HEARTS in the Americas Initiative in Dominica and look forward to the continued engagement to ensure that its implementation is successful.

During the meeting, Dominicans were urged to “know their numbers today”.  Every citizen was urged to get a Blood Pressure check and seek care if their numbers were elevated or higher than 140/90.