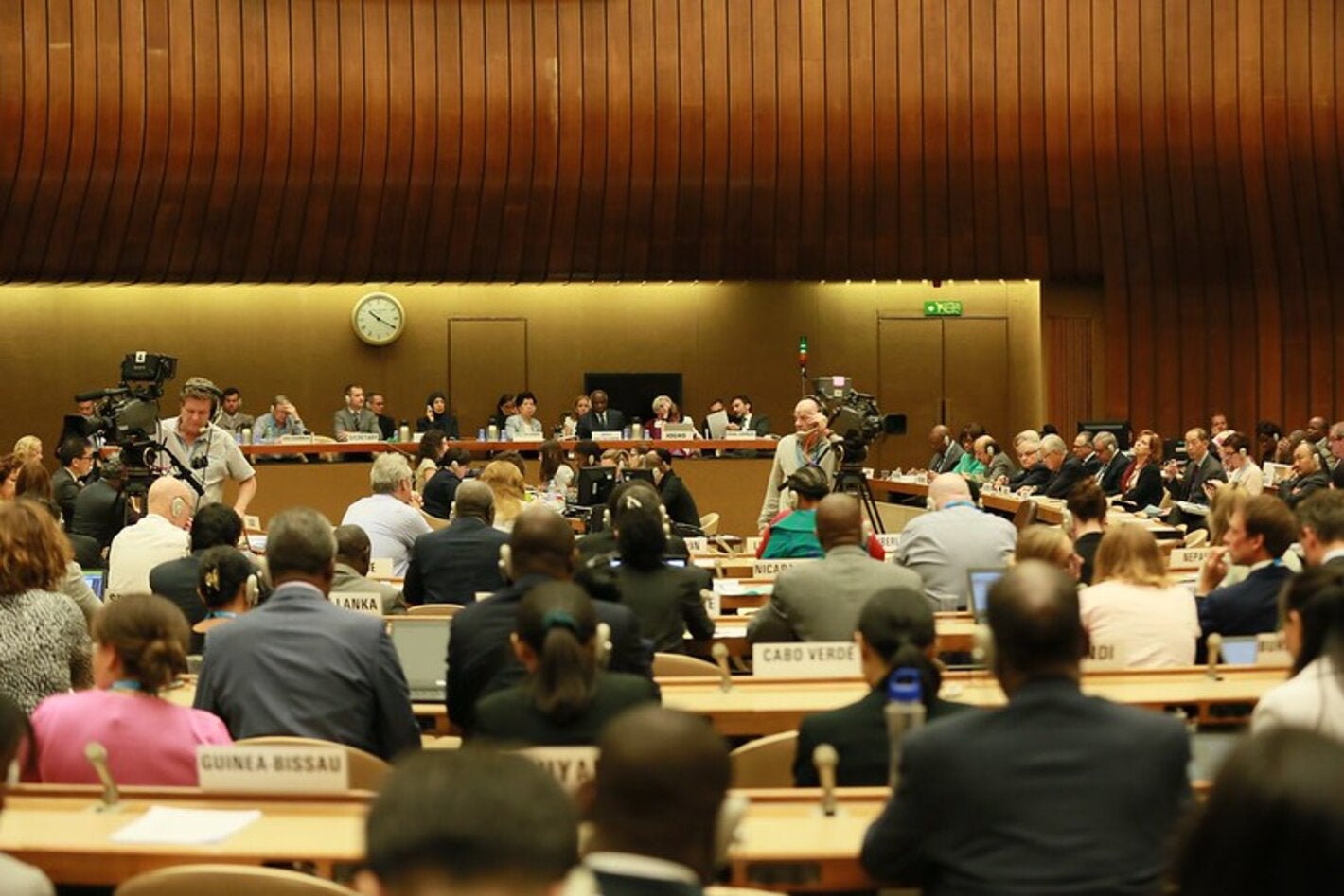 Geneva, 29 May 2017 (PAHO/WHO) - Dementia, immunization, the health of refugees and migrants, substandard and falsified drugs, and public health dimensions of the global drug problem were some of the topics delegates agreed upon the 70th World Health Assembly.

Committees A and B met Saturday 27 and Monday 29 May to adopt several resolutions. The World Health Assembly, which began on 22 May, will meet through 31 May.

Delegates at the World Health Assembly today endorsed a global action plan on the public health response to dementia 2017-2025 and committed to developing ambitious national strategies and implementation plans. The global plan aims to improve the lives of people with dementia, their families and the people who care for them, while decreasing the impact of dementia on communities and countries. Areas for action include: reducing the risk of dementia; diagnosis, treatment and care; research and innovative technologies; and development of supportive environments for caregivers.

They called on the WHO Secretariat to offer technical support, tools and guidance to Member States as they develop national and subnational plans and to draw up a global research agenda for dementia. Delegates recognized the importance of WHO's Global Dementia Observatory as a system for monitoring progress both within countries and at the global level.

Delegates emphasized the need to integrate health and social care approaches, and to align actions to tackle dementia with those for other aspects of mental health, as well as noncommunicable diseases and aging. They also highlighted the importance of ensuring respect for the human rights of people living with dementia, both when developing plans and when implementing them.

Worldwide, around 47 million people have dementia, with nearly 9.9 million new cases each year. Nearly 60% of people with dementia live in low- and middle-income countries.

Delegates agreed to strengthen immunization to achieve the goals of the Global Vaccine Action Plan (GVAP). In 2012, the Health Assembly endorsed GVAP, a commitment to ensure that no one misses out on vital immunization by 2020. However, progress towards the targets laid out in that plan is off track. Halfway through the decade covered by the plan, more than 19 million children were still missing out on basic immunizations.

Today's resolution urges Member States to strengthen the governance and leadership of national immunization programs. It also calls on them to improve monitoring and surveillance systems to ensure that up-to-date data guides policy and programmatic decisions to optimize performance and impact. It calls on countries to expand immunization services beyond infancy; mobilize domestic financing, and strengthen international cooperation to achieve GVAP goals.

It requests the WHO Secretariat to continue supporting countries to achieve regional and global vaccination goals. It recommends scaling up advocacy efforts to improve understanding of the value of vaccines and of the urgent need to meet the GVAP goals. The Secretariat will report back in 2020 and 2022 on achievements against the 2020 goals and targets.

Immunization averts an estimated 2 to 3 million deaths every year from diphtheria, tetanus, pertussis (whooping cough), and measles. An additional 1.5 million deaths could be avoided if global vaccination coverage were improved.

The Region of the Americas "is very concerned about the slow implementation" of the Global Vaccine Action Plan 2012-2020, according to a statement the delegations shared during the discussion. They recalled that in 2015 the Pan American Health Organization (PAHO) adopted a plan of action on immunization aligned with that of WHO. "The strategies of the PAHO Plan of Action led to historic public health achievements in the Americas," stressed the countries in their joint declaration. All were reminded that the region was declared free of rubella and congenital rubella in 2015, and was declared measles free in 2016, in addition to having eliminated smallpox in 1971 and poliomyelitis in 1994.

"In order to maintain these achievements, we call on other WHO Member States to show similar high levels of political commitment to the sustainable elimination of these diseases," the countries of the Americas affirmed.

"The importation of cases from other regions of the world and the weakening of epidemiological surveillance systems have become major challenges for maintaining elimination in the region. All countries should take a more active role in strengthening routine immunization as an integral component of their national health systems, and promote actions to identify and address inequities, in order to ensure that all communities are protected from vaccine-preventable diseases," stressed the declaration from the Americas. It concluded with a call to step up efforts to achieve the goals of the GVAP.

Delegates asked the Director-General to provide advice to countries in order to promote the health of refugees and migrants, and to gather evidence that will contribute to a draft global action to be considered at the 72nd World Health Assembly in 2019. They also encouraged Member States to use the framework of priorities and guiding principles to promote the health of refugees and migrants developed by WHO, in collaboration with IOM and UNHCR, to inform discussions among Member States and partners engaged in the development of the UN global compact on refugees and the UN global compact for safe, orderly and regular migration.

There are an estimated 1 billion migrants in the world - one in seven of the world's population. This rapid increase of population movement has important public health implications, and requires an adequate response from the health sector. International human rights standards and conventions exist to protect the rights of migrants and refugees, including their right to health. But many refugees and migrants often lack access to health services and financial protection for health.

Health problems faced by newly-arrived refuges and migrants can include accidental injuries, hypothermia, burns, cardiovascular events, pregnancy and delivery-related complications. Women and girls frequently face specific challenges, particularly in maternal, newborn and child health, sexual and reproductive health, and violence. Children are prone to acute infections such as respiratory infections and diarrhea because of poor living conditions and deprivation during migration and forced displacement. Lack of hygiene can lead to skin infections.

Refugees and migrants are also at risk of psychosocial disorders, drug abuse, nutrition disorders, alcoholism and exposure to violence. Those with noncommunicable diseases (NCDs) can also suffer interruption of care, due either to lack of access or to the decimation of health care systems and providers.

Declaration of the Americas on migration

The delegations of the Americas also voiced a regional opinion on this subject.

"Today's world is witnessing an unprecedented level of human mobility that exposes refugees and many migrants to health risks associated with perilous journeys and limited access to continuity and quality of health care. This also creates new challenges to local and national health systems and global public health," the delegations of the Americas noted. "Addressing the health dimensions of this issue can help to protect both mobile populations and host communities," they stressed.

In their declaration, the countries of the region recalled that last year PAHO adopted a resolution on the health of migrants, in which it urges States to develop interventions aimed at reducing health risks, strengthening migrant-sensitive programs and services, improving regulatory and legal frameworks to address their specific needs, and other points. PAHO is in charge of strengthening coordination and collaboration within the Inter-American and United Nations systems. More recently, in April of this year, the Ministers of Health of Mesoamerica undertook to make joint efforts to improve the available information on the health situation of migrants and forge partnerships for that purpose.

These are just a few "examples of the commitment many countries of our region have made towards Universal Access to Health and Universal Health Coverage."

The delegations of the Americas believe that "promoting the health of migrants in all its dimensions is crucial and should, as appropriate, be part of any attempt to improve the governance of international migration." They added that "WHO has an important role to play in promotion of the inclusion of the issue of the health of migrants in ongoing discussions taking place within the UN system, particularly in the development of the Global Compact for Safe, Orderly and Regular Migration."

The Assembly also agreed a definition of "unregistered or unlicensed medical products". These have not been assessed or approved by the relevant national or regional regulatory authority for the market in which they are marketed, distributed or used.

Delegates agreed on the need for intensified efforts to help Member States address the world drug problem. They asked the WHO Secretariat to strengthen its collaboration with the United Nations Office on Drugs and Crime and the International Narcotics Control Board to implement the health-related recommendations of in the outcome document of the 2016 Special Session of the United Nations General Assembly on the world drug problem (UNGASS).

It has been 26 years since the Health Assembly made a decision on this topic. The Secretariat is asked to report back on progress in 2018, 2020 and 2022.

According to WHO's latest estimates, psychoactive drug use is responsible for more than 450 000 deaths each year. The drug-attributable disease burden accounts for about 1.5% of the global burden of disease. Furthermore, injecting drug use accounts for an estimated 30% of new HIV infections outside sub-Saharan Africa and contributes significantly to hepatitis B and C epidemics in all regions.