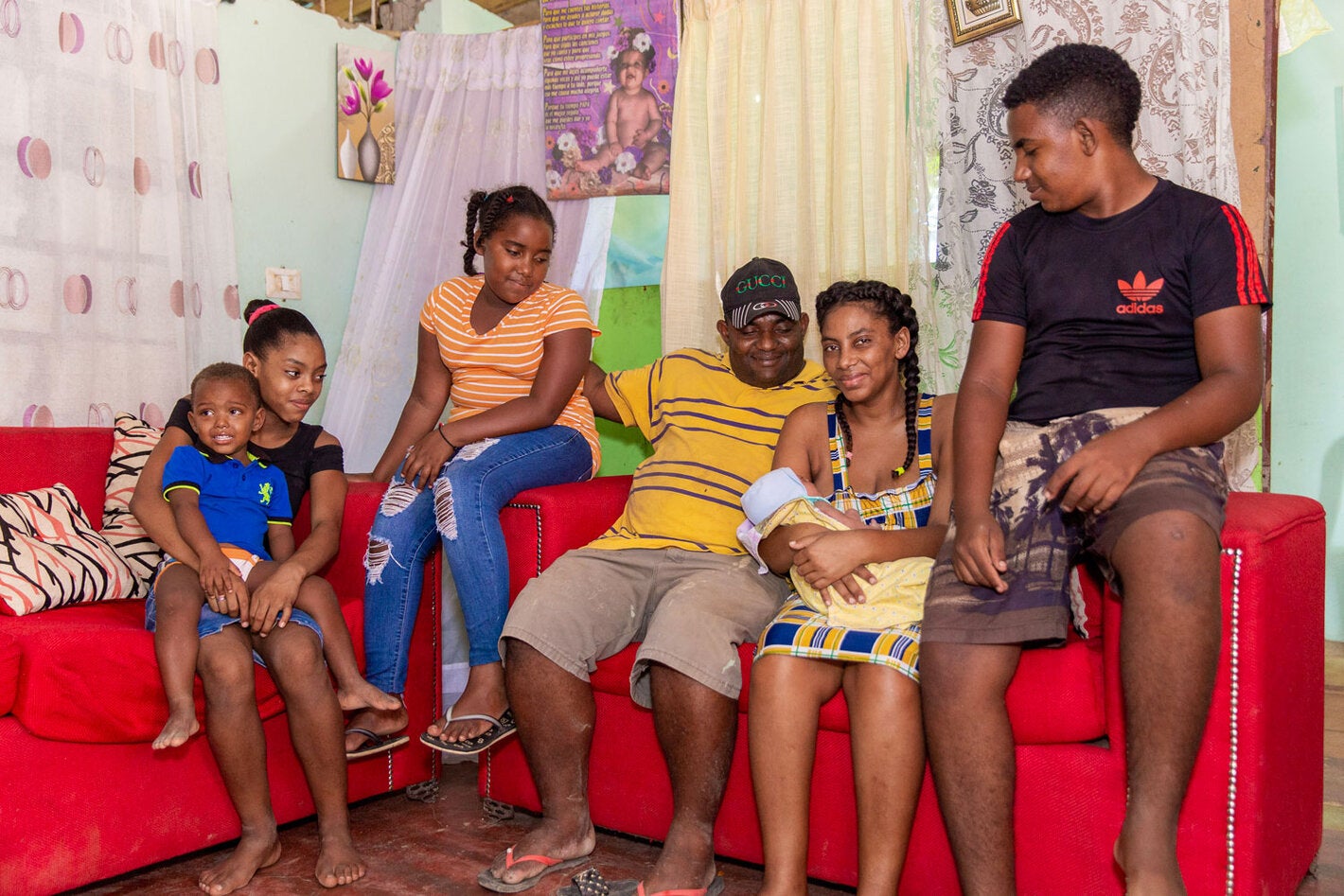 Washington D.C. 30 September 2010 (PAHO/WHO) − The photo exhibit Best practices can save women´s lives launched today to shine a light on good practices to reduce maternal mortality from the Pan American Health Organization’s (PAHO) 10 priority countries for this topic: Bolivia, Dominican Republic, Guatemala, Guyana, Haiti, Honduras, Nicaragua, Paraguay, Peru and Suriname. The exhibition, which highlights proven and evidence-based practices, is being shown at the PAHO Headquarters in Washington D.C. during the organization’s 57th Directing Council, which brings together ministers and high-level health authorities from across the Americas.

This exhibit highlights interventions that save the lives of pregnant women and their newborns, which were implemented in the 10 PAHO priority countries for reducing maternal mortality. These practices have been proven effective and are backed by evidence.

The images reflect both the voices of women who were able to survive thanks to the timely response of health services, as well as the role of communities, health workers, and families as they care for these women.

These interventions build a healthy today because they save mothers' lives right now. But they also promote healthy pregnancies, which result in a reduction of noncommunicable diseases and thus, in a healthy tomorrow. 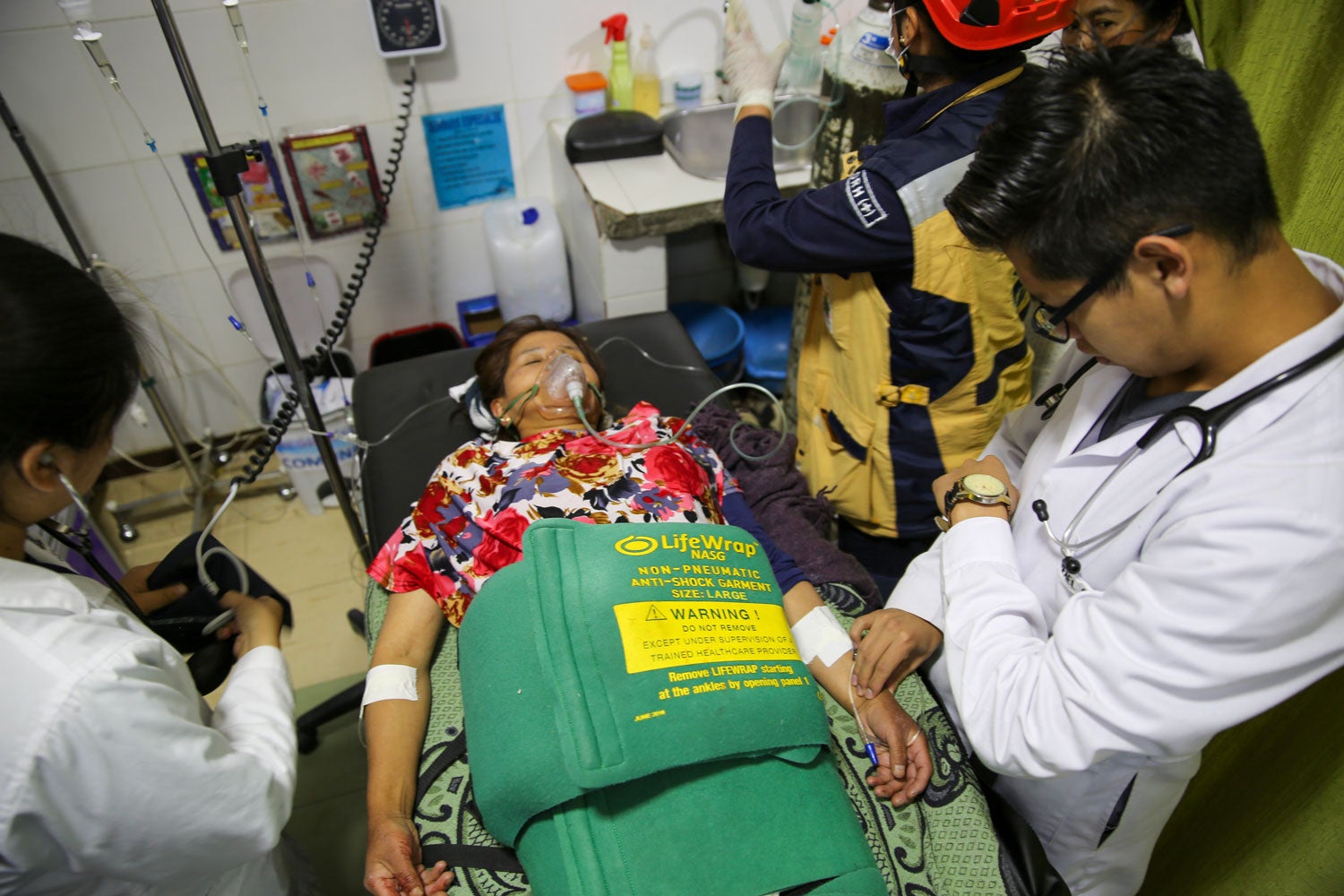 This exhibit highlights interventions that save the lives of pregnant women and their newborns, which were implemented in the 10 PAHO priority countries for reducing maternal mortality. These practices have been proven effective and are backed by evidence.

The images reflect both the voices of women who were able to survive thanks to the timely response of health services, as well as the role of communities, health workers, and families as they care for these women.

These interventions build a healthy today because they save mothers' lives right now. But they also promote healthy pregnancies, which result in a reduction of noncommunicable diseases and thus, in a healthy tomorrow. 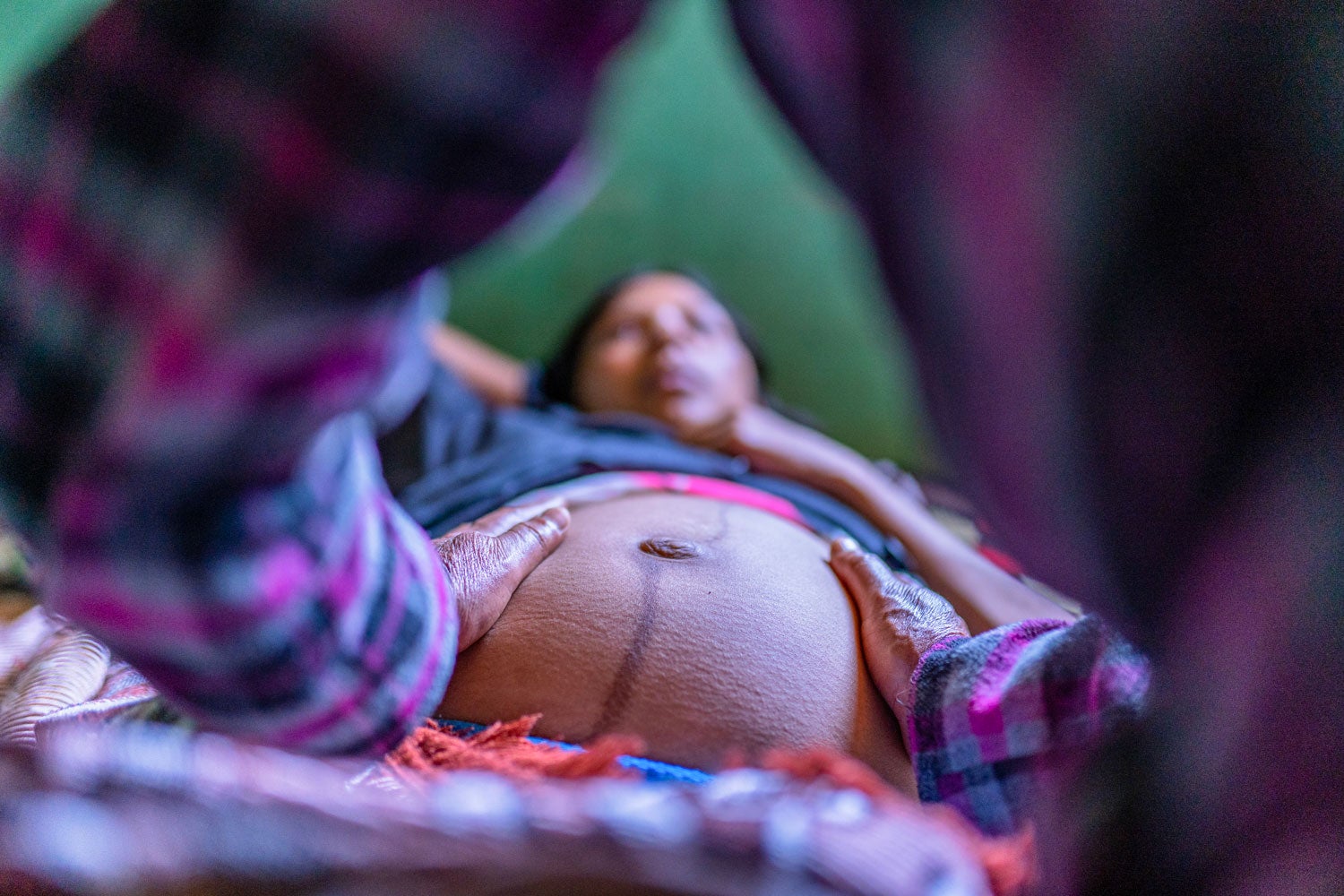 When Hortensia Lopez was eight years old, her grandma asked her to show her the palm of her hands. Hortensia did so, and her grandma predicted that she would become a traditional birth attendant (TBA). A long time has passed since that unforgettable moment for this TBA, who has dedicated 58 years of her life to this profession in Soloma, Huehuetenango. Hortensia is aware of the importance of her role as a link between the pregnant women in her community and the health center.

Hortensia is one of the 90 TBA who have been trained since 2016 by PAHO/WHO Guatemala regarding the timely detection of pregnancy; linking pregnant woman to health services to start prenatal care before or as close as possible to 12 weeks of gestation; recognizing the danger signs during pregnancy, childbirth and postpartum; and organizing proper transportation to the health service.

These trainings, thanks to the Integrated Health Systems for Latin America and the Caribbean (IHSLAC) project, supported by PAHO and Canada, are joined by 45 health commissions trained in danger signs and safe transfer of obstetric-neonatal emergencies, and are equipped with stretchers, hand lamps and community emergency plans. 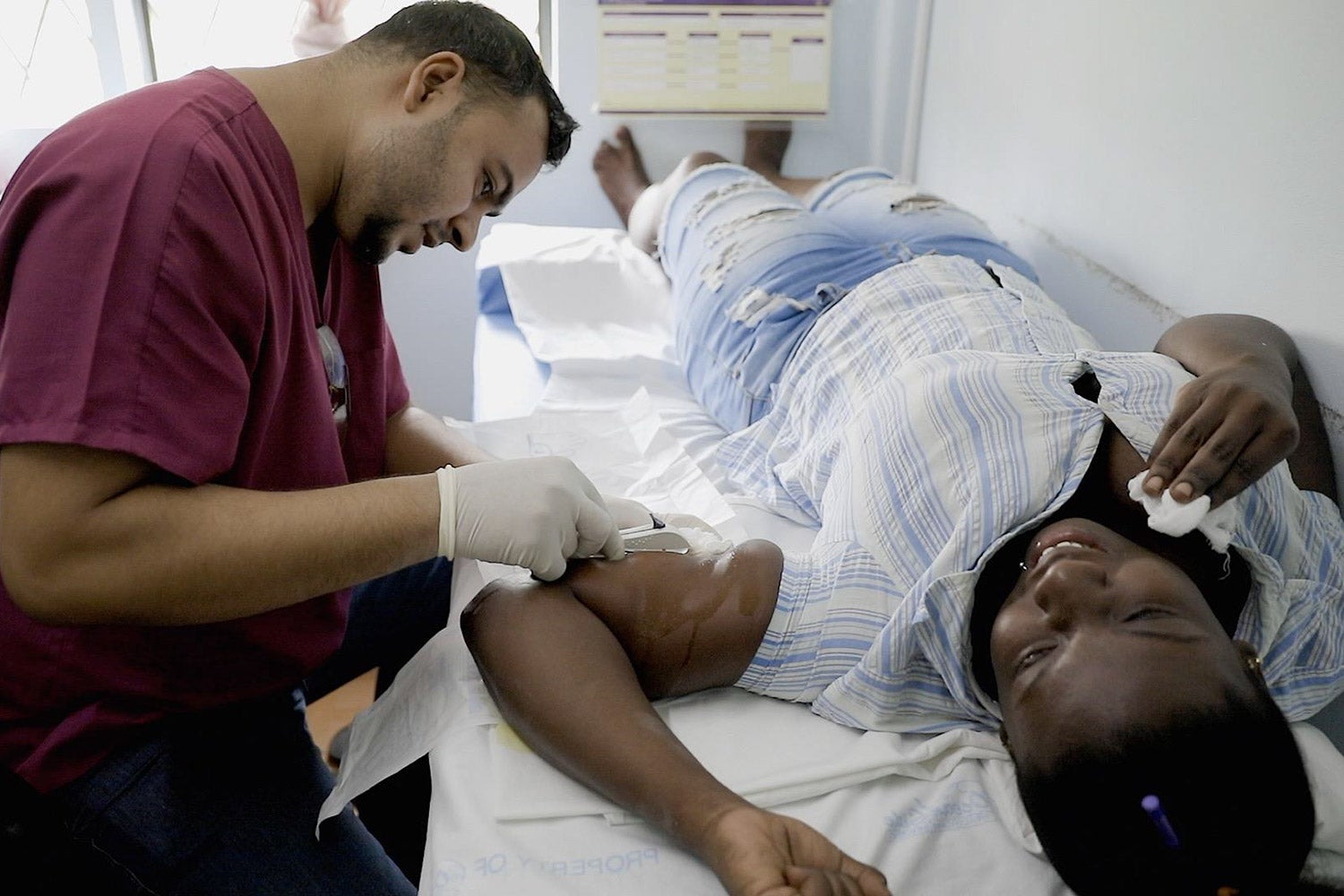 The Bertverwagting Health Center, located on Guyana’s East Coast, provides family planning counseling and contraception. This center serves a population of approximately 2,160 people and ensures that all women of reproductive age can prevent unwanted pregnancies , which could potentially lead to death.

In Guyana, this initiative, thanks to the Integrated Health Systems for Latin America and the Caribbean (IHSLAC) project, supported by PAHO and Canada, includes the implementation and maintenance of high-quality long-acting reversible contraceptive (LARC) services. It is estimated that more than 500 women will be protected each year around the country through cascade training and the provision of implants and IUDs. Family planning clinics are available at 10 regional hospitals, addressing the unmet need for modern contraception in the interior of the country. 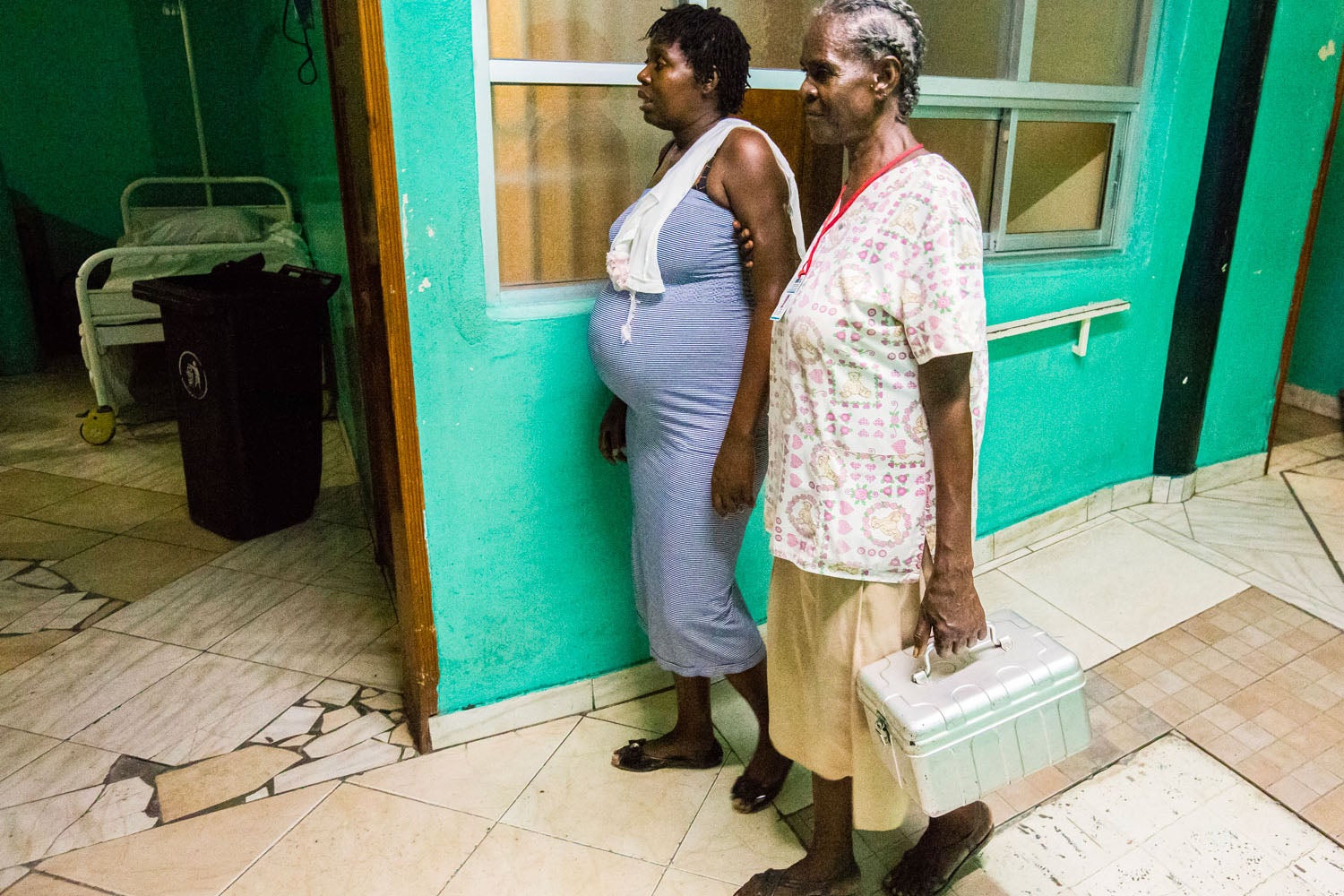 The traditional birth attendant (TBA) Mondesir Rosemare left her home immediately when she received a call to inform her that Maricia Petit, who was at the end of her pregnancy, was not feeling well and had headaches and vision problems. Both women live in the mountains 5 km from the nearest hospital of the commune of Asile, in the department of Nippes.

This was Maricia's fifth pregnancy, and the previous four children were born at home with Mondesir's help. However, based on the training received thanks to the Integrated Health Systems for Latin America and the Caribbean (IHSLAC) project, supported by PAHO and Canada, Mondesir only accompanies pregnant women to the hospital: "I refer 100 percent of pregnant women who I work with to the health facilities." She acknowledges that TBAs cannot solve complications like the one Maricia had, who received adequate care in the health system, where they managed to save her and her baby's lives.

In Haiti, IHSLAC enabled the strengthening of the health system, including working with the community and the government. At the community level, there was support for the implementation of the community health system model that emphasized maternal health and the referral of pregnant women to the centers. Between January and April 2019, 17 women were referred to the health center, a practice that was not performed until then. 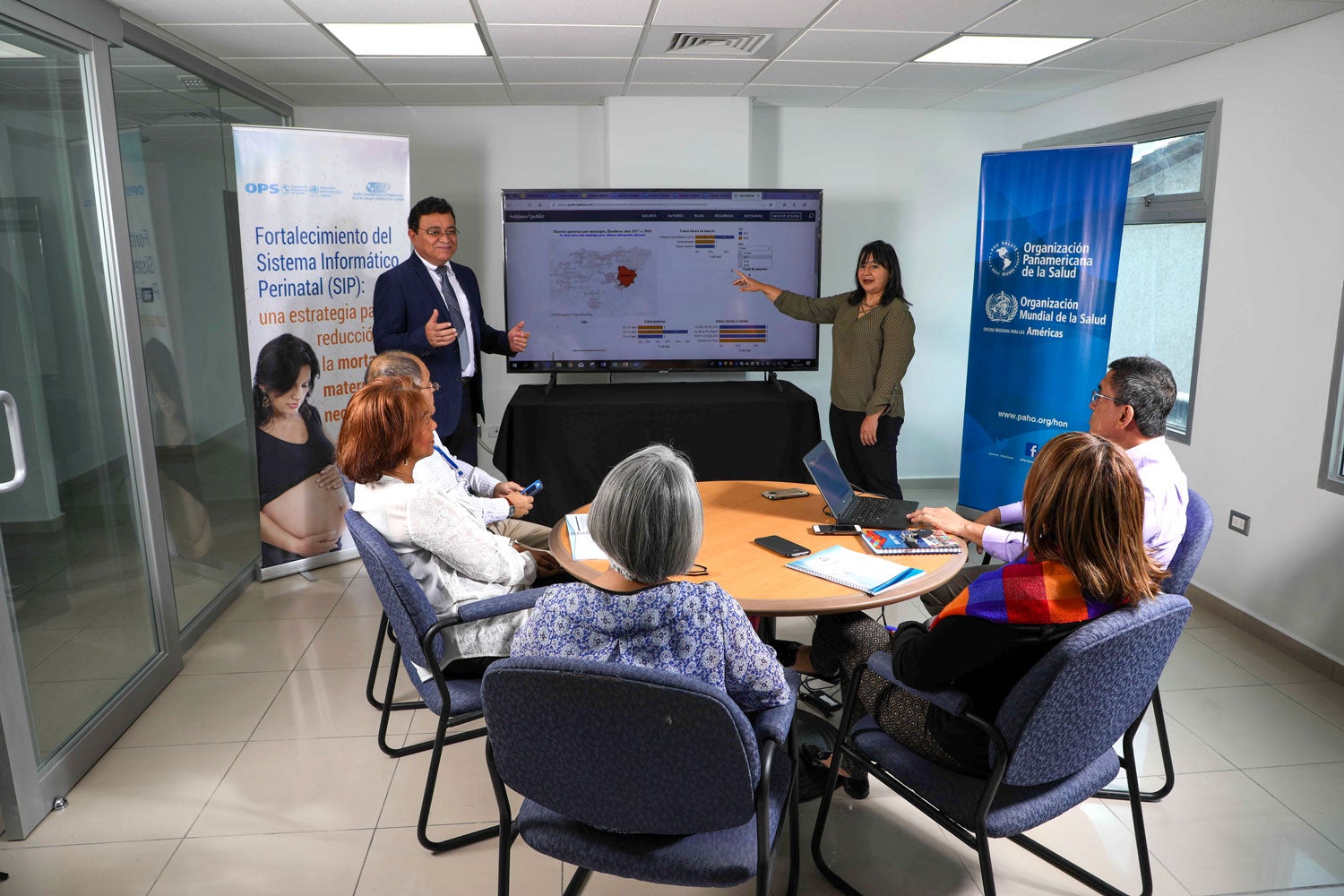 The situation room presents information on each maternal health patient, which provides the opportunity to obtain an accurate local and national picture of maternal mortality for sound decision-making.

In Honduras, this has been implemented using the platform Tableau, which provides the possibility to analyze the sate of maternal deaths, risks and conditions, in near real-time, to provide a more dynamic and individualized analysis of the situation and propose solutions at different management levels. 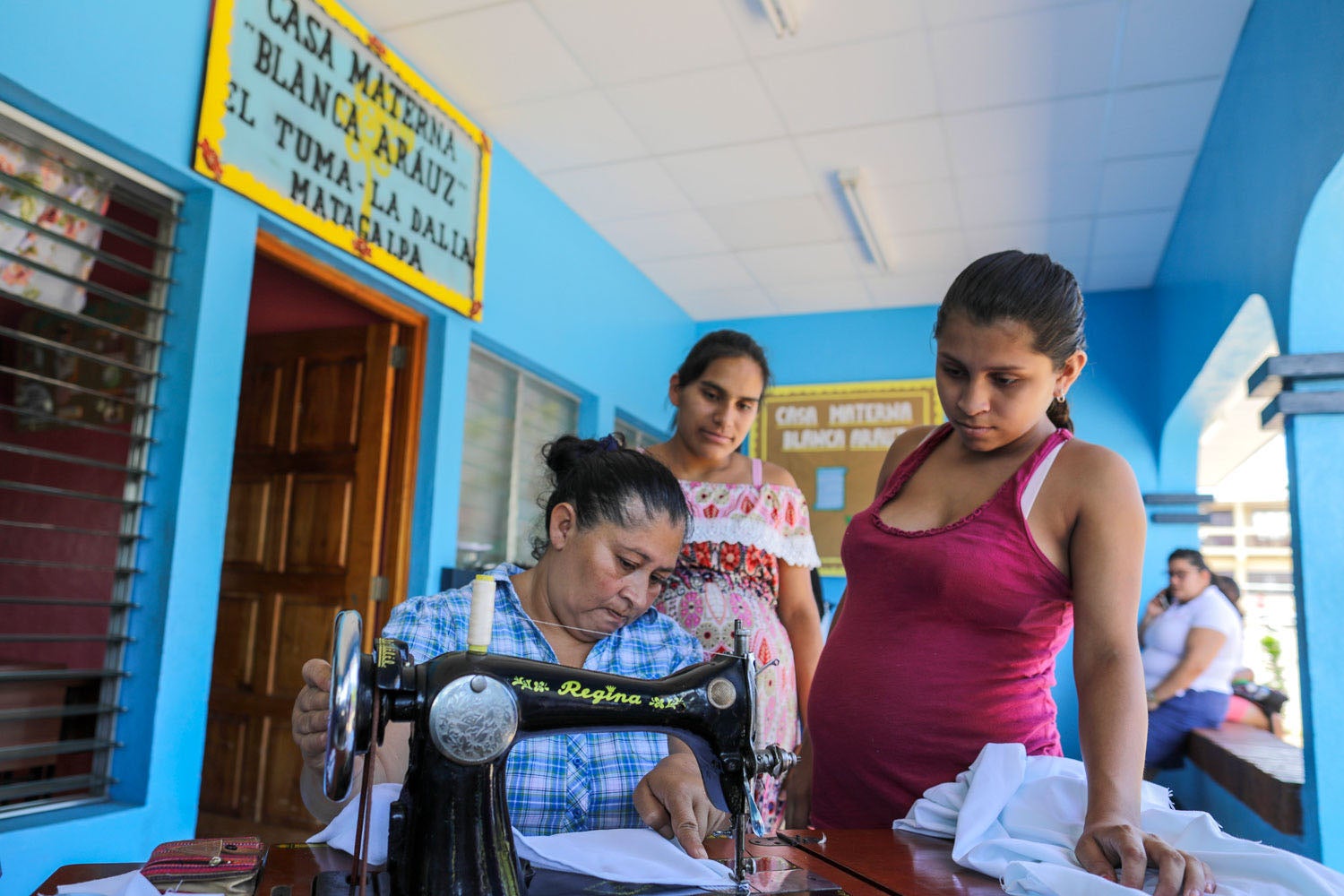 While waiting to give birth, women housed in the Blanca Araúz maternity home in the Tuma La Dalia municipality of the Matagalpa department sew, embroider or craft things such as piñatas or floral arrangements, in addition to other activities to get ready for their babies.

Maternal waiting homes house pregnant women from rural areas during the weeks prior to childbirth and during postpartum. The purpose of these houses is to bring the pregnant women closer to the health services to ensure an institutionalized birth attended by qualified personnel. They are generally located in low-access areas to facilitate timely movement to health centers, which reduces barriers to access to care such as long distance, geography, weather, infrastructure or transportation, among others. 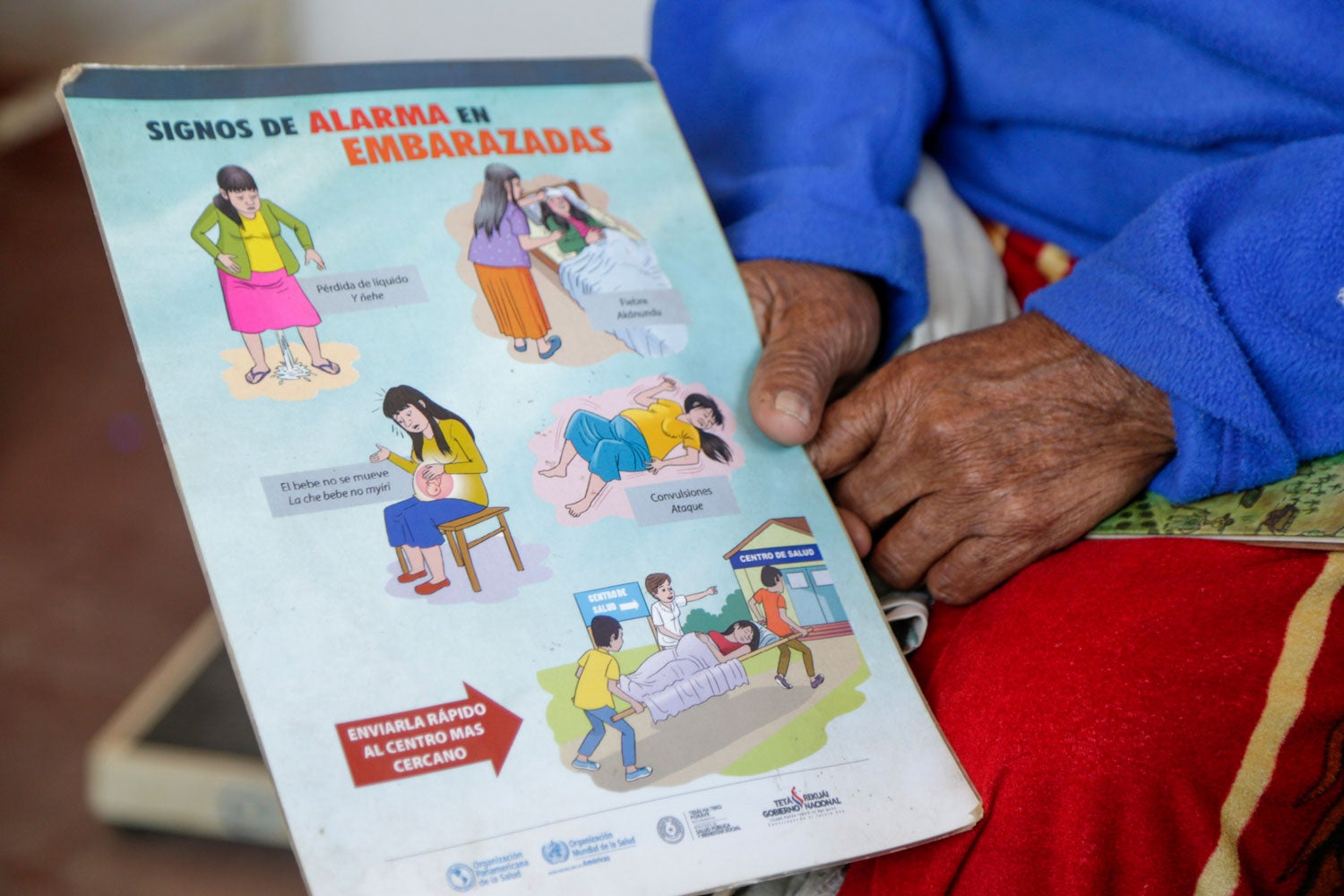 In the La Patria community in the Paraguayan Chaco, about 500 km from Asuncion, there are five indigenous traditional birth attendants (TBAs), all of who are prepared to detect warning signs in pregnant women. This has been made possible by training in “Community Code Red.”

The Code Red is a methodology for handling cases of obstetric emergencies in an effective and timely manner with emphasis on the main causes of maternal mortality: severe hemorrhage, hypertension in pregnancy, and serious infection that can lead the patient to a state of shock. The same plan involves the community so that it can detect and act in case of risk to the pregnant woman or newborn. In this case, one of the recommendations is to have a plan organized by the community so that women can get quality care in childbirth, because distance is usually a reason why women don’t have access to this. 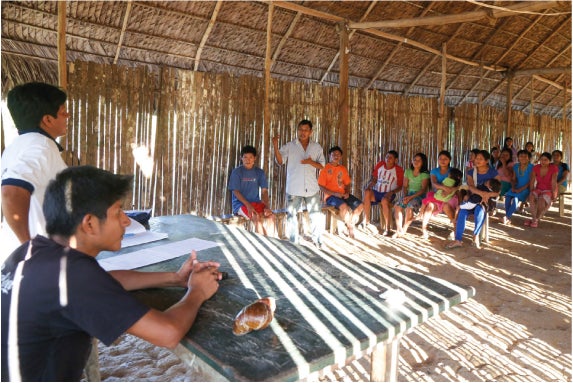 In the province of Condorcanqui, in Peru's Amazonas Region, health personnel and community leaders of the Awahun indigenous people have come together to identify health needs and problems affecting access to maternal health services since 2016, thanks to the Integrated Health Systems for Latin America and the Caribbean (IHSLAC) project, supported by PAHO and Canada.

These communication and articulation meetings allow them to analyze causes, effects and interventions, such as the intercultural adequacy of maternal health services. WHO points to the importance of cultural factors in women's and families' decisions to use midwifery care.

The intercultural dialogues increased coverage of pregnant women accessing antenatal care in this community, which over the past three years increased from 58% to 76%. There was also an increase in rural institutional childbirth (51% to 62%) and a reduction in the number of maternal deaths (6 to 4). 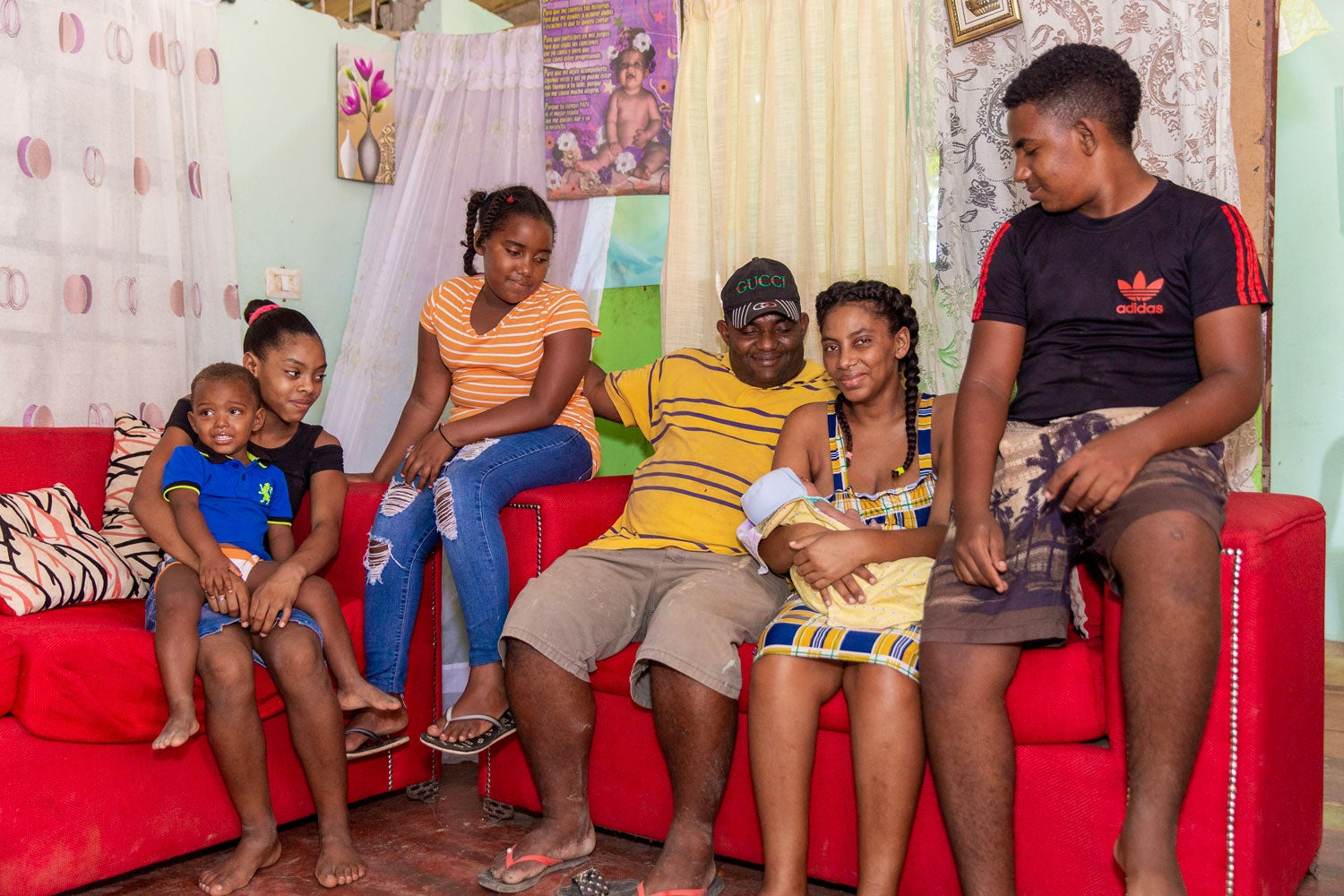 Llarilanda went to the Women's Hospital to give birth to her fifth child. It was a natural birth. They put her child on her chest, and everything seemed normal. Shortly after childbirth, she began to feel severe pain caused by postpartum bleeding from uterine atony, one of the most common causes of maternal death in the Dominican Republic. Llarilanda was well taken care of: she was immediately monitored in the postpartum, which allowed them to identify and treat the hemorrhage in a timely manner by activating the Obstetric Code Red and apply the sequence established in the protocols and guidelines for obstetric and neonatal care. Llaillanda was brought back to her home in Valiente, Boca Chica, where her husband Jorge, her five children, her mom and her community all waited for her. “I thank God and them [the doctors], because if I wasn’t put in their care, I wouldn't be here today, with my family, with my children," she says.

The obstetric emergency is a time of great anguish for the pregnant woman, her family and the health team. Achieving a good outcome for the mother and child requires trained teams to act in a coordinated manner, avoid wasting time and do what should be done at the right time. One way to achieve a successful outcome is through the implementation of obstetric emergencies protocols and guides. Care protocols are a tool that is based on the best knowledge that exists and is adapted to the reality of each health institution. This guides teams in taking the appropriate diagnostic and therapeutic steps, avoiding improvisation or use of unsafe practices.

“They told me I was bleeding, they did something to me and the bleeding stopped a little. But the pain continued. I was told I was going to be moved to another hospital," Llarilanda recalls. Since the Women's Hospital does not have an Intensive Care Unit (ICU), the network quickly coordinated the transfer and reception at the San Lorenzo Maternity-Children's Hospital in Los Mina. Llarilanda required for the management of her severe hemorrhage shock the use of the non-pneumatic anti-shock suit, mass blood transfusion, and an abdominal hysterectomy, all done by a multidisciplinary team of obstetricians, internists, intensivists and anesthesiologists, with the coordination and support of the authorities of both hospitals and the Metropolitan Regional Health Service. This 30-year-old mother spent 15 days in the ICU and almost a month away from home and her newborn.

The Dominican Women's Hospital and the San Lorenzo Children's Maternity Hospital in Los Mina are two of the five hospitals involved in the collaborative adherence to obstetric and neonatal care protocols of hospitals forming specialist in obstetrics/gynecology and neonatology, an initiative developed at the National Health Service with support from PAHO/WHO. The actions under the Zero Maternal Death by Hemorrhage and Code Red  projects initiated in 2015 by PAHO/WHO, with the support of its Latin American Centre for Perinatology, Women's Health and Reproductive Health (CLAP) continue to be implemented in the country and are incorporated into national protocols. 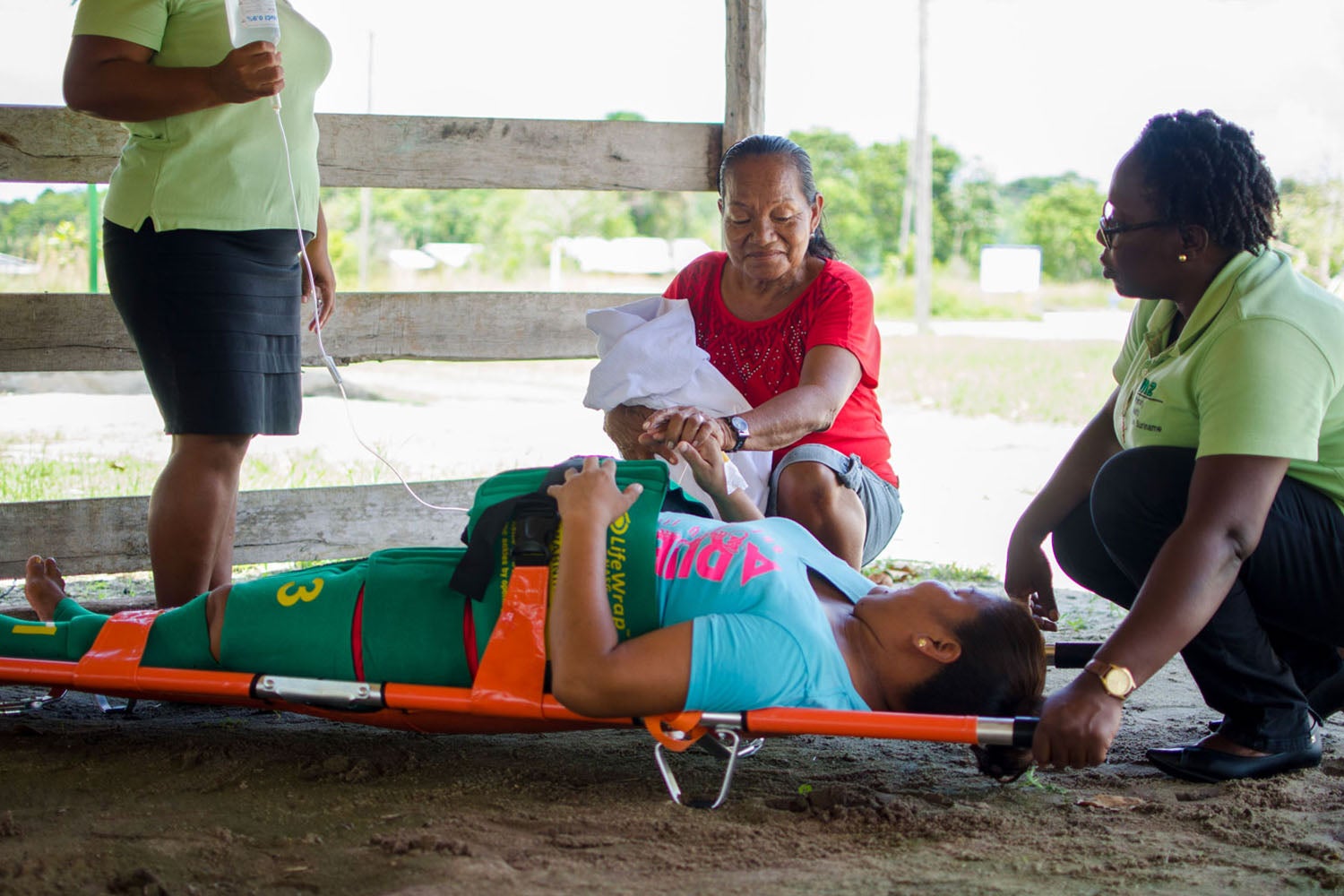 In November 2018, PAHO, in collaboration with the Ministry of Health, provided training in which 34  first-level obstetricians from hospitals and the first level of care were trained as trainers to handle obstetric emergencies. This training included the prevention and management of bleeding using simulation, including the use of the non-pneumatic anti-shock suit and the intrauterine ball. Participants also received training in the Obstetric Code Red, related to communication between health teams and the basics of surgical practices.

The training of trainers in obstetric emergencies is a methodology that transmits knowledge in cascade and strengthens the capacity of obstetric professionals to improve the treatment of pregnant women. These skills include the ones taught through  the project Zero Maternal Deaths by Hemorrhage - the second cause of maternal deaths.

Guyana receives 28,800 doses of the Janssen Ad26COV2.S vaccines through a collaboration between PAHO and Spain
15 Jan 2022