For over 40 years, the Revolving Fund of the Pan American Health Organization has helped the countries of the Americas protect people against some of the world's worst diseases, including polio, measles, yellow fever, rotavirus, and HPV. Through the fund, Member States pool their national resources to procure high-quality life-saving vaccines and related products at the lowest price."

The PAHO Revolving Fund is a big part of what makes the Americas one of the biggest successes in the annals of vaccination. The Fund marries economics and public health to protect people against some of the world's worst diseases, including polio, measles, yellow fever, rotavirus, and human papillomavirus, to name just a few.

By buying in bulk, the Fund greatly improves its purchasing power. In other words, it takes advantage of the economics of scale. Through the fund, 41 countries and territories pool their resources to procure high-quality vaccines, syringes, and related supplies for their populations at the lowest price.

Since its inception in 1977, the Fund has helped to vaccinate tens of millions of children and save millions of lives. This helps to explain why the Region of the Americas was the first of the six WHO regions to eliminate polio, why it is the only one, so far, to eliminate measles and rubella, and why its infant mortality rate is so low. At the same time, the Fund has facilitated the rapid and equitable introduction of new vaccines.

The Fund is highly popular with the Region's Member States. In September 2013, the Directing Council said the "operational and financial capacity to deliver vaccinations has made the Americas a world leader in the elimination of vaccine-preventable diseases". It called the Fund "a pillar of the regional immunization program's leadership position."

The PAHO Revolving Fund Product Portfolio is the collection of products offered to the Countries and territories in Latin America and the Caribbean to be used in the Immunization Programs. The Portfolio includes product detailed information to support Member States with the procurement planning. 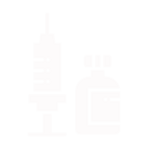 Syringe of single use with a re-use prevention feature in a blister packed with fixed needle. 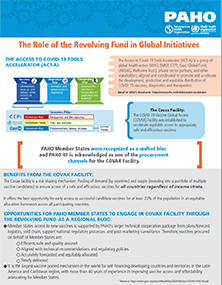 The Role of the Revolving Fund in Global Initiatives

Protecting the
people of the Americas
through vaccination.